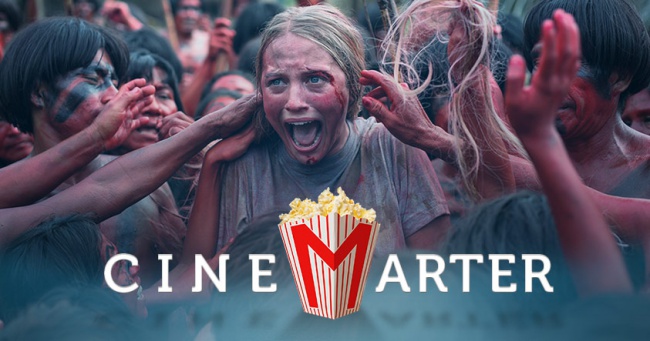 It is with The Green Inferno – the long-delayed movie from horror director Eli Roth – that we must ask ourselves some important questions. Can a film still be considered “good” if it accomplishes its goal, even if all of its individual elements fail to hold up to inspection? What if that goal is reprehensible? How do you judge a movie that wants to shock your senses, repulse you, and do little more? If it accomplishes that, through whatever means, does that mean it’s a success? I’m not sure there are right or wrong answers to any of these, but just thinking about them is a good first step.

The Green Inferno, as you have likely surmised, is a movie whose intention is to make your eyes widen and your stomach turn. It doesn’t want to do a whole lot more than make you sick, grossed out, and maybe a little dizzy. It does so through excessive violence, genital mutilation, more violence, cannibalism, and – you guessed it – even more violence. Who needs good characters, an interesting plot, slick cinematography, or strong acting when you can throw buckets of blood and guts at the camera? 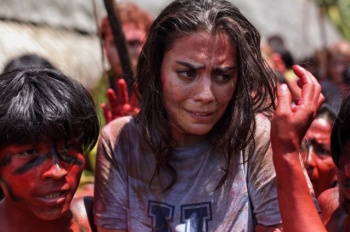 The story we do get sees a group of college activists – played by Eli Roth’s wife, the younger Spy Kid, and a bunch of nobodies – fly to the Amazon rainforest to protect the indigenous tribes, only to have their plane crash and get taken hostage by those they sought to save. As it turns out, the natives are not friendly and are very cannibalistic. Beyond a few escape attempts and a bunch of incredibly gruesome scenes, there’s nothing more to The Green Inferno.

It’s true that you’re unlikely to see a more violent and disgusting movie this year. If you go to the cinema to experience images and feelings you don’t get in your day-to-day life, then The Green Inferno certainly delivers. It is gross. It is repulsive. It is reprehensible. It wants to offend. It hopes to outrage. And it accomplishes its goals. This is a movie that is difficult to watch, intentionally ramping up its premise and its violence to the highest degree permitted by its R rating, which, by the way, reads like this:

It has cannibalism, genital mutilation, and more blood and guts than you’ll see in any other movie this year.

Without a big name attached as the director and a studio backing the project, The Green Inferno doesn’t even come close to receiving an R rating. If you needed any more proof why the MPAA is a flawed organization, look no further than this movie. Like I said, you’re not going to see something worse than this movie in 2015 when it comes to its violent content, but it still managed to get away with an R.

I’ve spent so much time on the violence because once you get past that, there’s very little more to talk about when it comes to The Green Inferno. There’s some thinly veiled social commentary about activism, but that’s about as deep as it gets. Its characters are underwritten and annoying – part of the point, but almost more torturous to watch and listen to than the actual, well, torture – the acting is terrible, the feeling of xenophobia isn’t one that’s easy to shake, the cinematography is ugly, the dialogue is ridiculous, and we end on a terrible cliffhanger that may or may not lead to a sequel.

So, apart from the gore, there’s almost nothing to talk about here. It’s all bad. And yet, it accomplishes its goal, which is to make the audience at worst uncomfortable, and at best nauseated (or is it the other way around?). It has cannibalism, genital mutilation, and more blood and guts than you’ll see in any other movie this year – or maybe any year, depending on the type of movie-goer that you are. Is The Green Inferno worth seeing? It comes down to whether you want to watch something whose sole goal is being disgusting. Because The Green Inferno is most certainly that. It’s little else, but it is all kinds of gross. Does that make it good? I’m thinking not, but it does mean that its audience – whoever you may be – will get what they want from it. That counts for something, although not enough to recommend it to anyone outside of a very small niche.

Bottom Line: The Green Inferno is disgusting, although it knows that and embraces it.

Recommendation: Unless you fit into the very small group of people who are satisfied with a movie containing nothing but gore, you’ll want to skip The Green Inferno.