Spanning 5 long days and 3 conference halls the size of jumbo jet hangars, the Game Developers Conference is an astounding display of the industry’s current girth. If you have a particular interest – say, “Facial Rigging” or “Sweater Animating” – this is the one place you will not only find others like you, but relevant classes, lectures and possibly a luncheon or two. 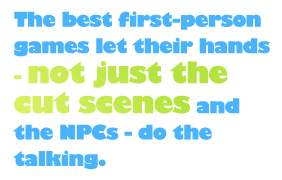 How perfect, I thought, when I booked my flight. I’d had a curious, if somewhat unexplainable fascination with hands in first-person shooters ever since I was assigned a countdown list for an old job in 2008. Someone at GDC – a developer, a publisher, a guest speaker – was going to justify my niche interest. I could feel it.

Outside the hall that hosted the “Designing Games for the 43-Year-Old Woman” seminar and stunk of stale bagels, I encountered my first subject: a PR guy who I knew was repping a number of first-person shooters.

“We love hands,” said the gel-haired man who had already booted his Outlook Inbox. “So you coming to this party tonight? I hear they’re serving fried macaroni and cheese!” I don’t think he was giving my question the attention it clearly deserved. Fortunately, the conference had just begun and there were plenty of other people left to validate my opinion.

Was it so strange for a reporter to ask about the significance of well-made hands at a conference with sessions titled “Gamification 201 – 60 Tactics in 60 Minutes” and “Saying “Goodbye” to Shadow Acne”?

As I boarded my plane back to New York City, I realized “yes.” Yes, it was weird to ask everyone in this industry about hands in first-person shooters. But it shouldn’t have been.

Spoken about like D-list co-stars, hands play a variety of A-list roles that affect the gameplay, graphics, and mood in the US’ most popular genre; the fact that most everyone I speak with seems flippant about them might explain why, for the most part, they look and feel, pardon the pun, slapped together. The problem with hands in most first-person shooters is that they have three jobs and they rarely do any of them well.

The best first-person games let their hands – not just the cut scenes and the NPCs – do the talking.

During firefights in Far Cry 2, the protagonist’s fingers or arms occasionally break. With his good hand, our man grotesquely resets the bone and tends to the wound. The sequence, initiated by the player, takes place nauseatingly close to the camera.

People inherently speak with their hands, signaling joy, pain, or emphasis. More videogame characters should do the same. They should act. And to act, they need to …

Job 2: Be a Character

By character, I mean personality. How they look. How they behave. In a third-person game, plenty of thought goes into character. Why do they wear their hair this way or tuck their thermal sweater that way? One argument against designing hands with too much character in a first-person game is that they shouldn’t be a visual distraction. The hands should be blank slates, vessels through which players experience the world. Gun rests, basically. 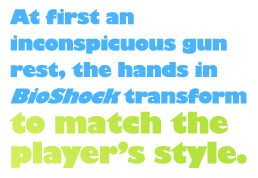 This idea of an unobtrusive vessel isn’t limited to the FPS genre. “Leaving room for the player’s personality” is an excuse that has launched a thousand bald space marines, bare-chested barbarians, and black-masked ninjas in a variety of games.

The FPS equivalent of these bargain bin character designs is the “gloved” hand. Often super glued to its weapon, the glove hand comes in one color (black) and one emotion (fearless). It is characterless.

Irrational Games, the creators of System Shock 2 and BioShock, put a twist on blank slate hand design and in so doing have put more character in their protagonist’s hands than all of their competitors’ combined. The nameless hero’s hands are bare. No watches, rings or brass knuckles. No brand logos. No gloves. The left hand has a tattoo of a chain and a cotton long-sleeve shirt reaches up the forearm to the wrist. Alone, they’re not particularly memorable.

In the game’s world, plasmids are bioengineered injections that provide users with the power to manipulate ice, electricity, fire, air, and some character’s minds. When the player activates a plasmid, it manifests through the hero’s hands that tremble with frost or glow red with heat. Each plasmid shapes the boney structure with emotion: the fingers curl, dangle, or stretch.

At first an inconspicuous gun rest, the hands in BioShock transform to match the player’s style. The player does not feel like the man controlling a nameless guy who points at an enemy to unleash bees and ice. The player feels like the hero who has bees and ice clustering inside his arms, forcing them out through a blistered palm. Irrational found a way for the player to literally layer character onto the generic hands.

Every game isn’t a sci-fi, plasmid-soaked epic like BioShock. But people can carry guns differently. Hold a pistol sideways. Sling a rocket launcher over the shoulder. Even change gloves – maybe try mittens!

Hand designs may look generic, but players deserve to imbue them with emotion or swagger. Or at least modify them. In the third-person genre, a character must look like he or she belongs in the world. We shouldn’t settle for black gloves in Iraq or Mars and under the sea.

Character and performance add polish and personality to a product, but the most important role the hands serve is the practical one. The hands are the tools we use to communicate with a first-person shooter. They fire our weapons, open doors, climb ledges. Typically it’s a one-way conversation, us talking to the game, but more ambitious titles are using hands to relay info back to the player, creating more tangible worlds.

Developers have begun to understand that hands – like their third-person full-bodied counterparts – can provide context for virtual space. In a third-person game, when the character is near an edge and begins to lose their footing, they waves their arms for balance; when they, approach a movable block, they brace against it with their shoulders. In a first-person shooter, the character should do the same.

Mirror’s Edge, a first-person free running game, creates a sense of female protagonist Faith’s equilibrium with her hands. They pop up when she runs into a door, reach when she leaps for a ledge and as she walks across a wire 20 stories above the earth they wave to signal that she’s leaning too far left or right. 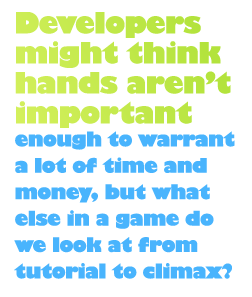 When Faith wall runs, one hand drags against the wall alongside her. Faith sticks to the wall as long as that hand is against it, a subtle visual cue to the player that when the hand drops, so will Faith. We understand Faith’s flow across the stage by how fast her hands pump up and down, and we see whether or not she connects with objects by how they latch to walls, ladders and rails.

There’s a lot of hype about 3D improving depth and spatial recognition in videogames, but as we’re beginning to see, the hands may be the real tool for guiding the player in complex environments.

Too many developers ignore the potential of what’s sitting right front of them – in front of us – for the entire game. The hands are gloved. Or bare and unrealistic. They barely animate and when they do, it’s generic pointing or knocking. They’re characterless, joyless and designed to serve a literal role in the same capacity as the health bar or the ammo counter.

Developers might think hands aren’t important enough to warrant a lot of time and money, but what else in a game do we look at from tutorial to climax? Games like Mirror’s Edge and FarCry 2 were praised for their immersion; hands played a big part in these small success stories.

Before GDC, I had a chance to sit down with a few men from Splash Damage, the team working on Brink. None of them could take credit for the hands in the game and they were, at first, reluctant to talk about them.

Even they seemed a little surprised by how well they had designed their hands. In Brink, my character vaulted and slid, the hands providing that Mirror’s Edge sense of balance. They also were customizable. Depending on the player’s size, skin color, outfit and duty on the battlefield, my soldier’s hands – along with the rest of his body – changed.

Splash Damage elaborated that the hands, arms, and guns would be just as customizable as the character’s shirt or face. This part of the body, as they pointed out, would be what the player stared at for the majority of the game. It should feel like them. They should connect with it.

For the past two decades, FPS hands have been little more than a gun’s babysitter. When it’s hungry, they feed it ammo. When it’s tired, they lug it around. Hands deserve better – not just in our games, but in our discussions.

This decade, developers are tapping current gen consoles for their full potential and trying new techniques to create believable fantasies. With so much blood and sweat spent on wood splintering, fabric shading, and sub-surface scattering, what better time than now to set some niche obsessions of the past aside and worry about something new?

Chris Plante is a New York-based pop culture writer who has written for publications including Esquire, Popular Mechanics and MTV. Read his work daily on The Daily, IFC and ctplante.com.