In an MMOG, “concurrency” refers to how many players are online at the same time. For games with multiple servers/shards/realms, this number is typically for a single server rather than across all servers the game operates. (Technically a “server” is a single machine in a cluster of other networked servers that together comprise a single instance of the entire game state, but I’m going to use it in the more common sense of a server cluster/shard/realm.)

Concurrency is a big concept for MMOGs. If few people are playing on a given server, it’s probably a dull place to be – you can’t find people to group with, the auction houses have little to offer, and so on. And if the MMOG requires high concurrency to make major systems work, such as crafting or a dynamic economy, then a low-concurrency system may mean the game is simply broken on that server.

Game companies love to tout their concurrency as evidence of their games’ success. EVE Online has made a habit of trumpeting their latest concurrency records, only recently tallying 54,446 simultaneous players on one server. Second Life once charted almost 90,000 across its archipelago. Conversely, games that never talk about their concurrency probably avoid the topic for obvious reasons.

It’s arguable, however, that concurrency is a bit of a sham. Or to put it another way, if I die alone in a dungeon on a server with 30,000 concurrent players, am I really playing an MMOG? If you go to MMOG developer conferences like Austin GDC, you’ll hear MMOG server devs explain that massive concurrency on a single server isn’t really a hard problem these days. Every game could be EVE Online or Second Life in this regard. The real challenge is game design and content: if 90,000 players entered a newbie zone in World of Warcraft, the game would be unplayable. That wouldn’t be so much a failing of server technology as it would be of not having enough terrain and content for so many players at once. If EVE Online had 54,446 players in the same system, it’d be unplayable too. Indeed, back in the heyday of Dark Age of Camelot‘s PvP keep battles, a known exploit was to get 100+ defenders on your side to crash the server and thwart the assault.

I think we should be talking about something other than concurrency. The real measure of a large-scale multiplayer experience should be described as proximal concurrency: how many other players are interacting with the same game data as you? (Such as: attacking the same monster.) This doesn’t mean they have to be standing in the same general location as you, although that’s a valid example. They could also be interacting with the same system. If an MMOG had an eBay-style live auction system, for example, and 20,000 players were bidding on the same rare item at the same time, that would be a proximal concurrency of 20,000.

In current games, proximal concurrency tends to be very, very low compared to server concurrency. This is usually because our notion of proximal concurrency is very location-based. 200 players moving around in the same location would cause so many movement updates to be passed between the server and all the players that performance would drag to a halt, at least on the players’ computers; their bandwidth would just choke on that many movement updates. 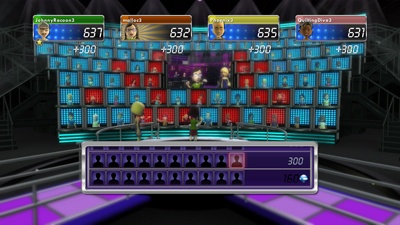 World of Warcraft‘s famed 40-man raids are an excellent example of proximal concurrency. Those are forty players working on the same overall team, in the same location, pursuing the same or at least related goals. In my former project Pirates of the Burning Sea, epic sea battles between two sides of 25 warships each are a regular event. EVE Online advises that players anticipating space battles larger than 300 ships should give advance notice to the devs so as to reserve premium server capacity. On consoles, the recently launched MAG for the Playstation 3 boasts 256-player battles.

Examples of truly vast proximal concurrency are rare and require something of a rethink of what an MMO is, both in terms of space and in time. And that’s the Hard Problem I’m tackling this time around: not a game design problem per se, but a problem in how game design is perceived. Calling eBay an MMOG is obviously a stretch, but it’s not completely crazy; you could extend the metaphor by claiming that it’s a dynamic-economy PvP MMOG that has finally solved the travel time problem. Anyone who has been outbid at the last minute knows that eBay is a for-real PvP experience, and just like in PvP MMOGs people use bots to enhance their competitive performance.

Let’s look at two examples of truly massive proximal-concurrency games. The first is 1 vs. 100.

This is a Microsoft project available on the Xbox 360. (And in the interests of full disclosure, I work at Microsoft but I have better things to do with my time than clandestinely promote my employer’s products via my column.) It’s a game show in which, at scheduled events throughout the week, players converge to play a trivia game. While players are grouped into four-player competitive sessions, they are simultaneously competing against all players at once. Successful players become “the one” against whom all players are competing.

In August of 2009, Microsoft announced that 1 vs. 100 had hit a concurrency record of 114,000 players. Because all players are answering the same trivia questions at the same time and competing against each other for the same prizes, it’s very fair to say that the game’s proximal concurrency record is also 114,000. That’s pretty staggering. Is it an MMOG? Assuming you’ve dropped the “RPG” from the end of that ungainly acronym then yeah, it’s an MMOG, and it’s maybe the biggest one in the world.

Except, of course, for everything Zynga makes. The creators of social-networking games such as Mafia Wars and the dreaded Farmville rack up tens of millions of players every day. Now I’ve done my time with Mafia Wars, and I’m not actually convinced it’s a game at all; it’s a giant progress bar that fills in faster the more you click on it, which turns out to be a powerful fantasy common to anyone who’s ever copied files on a computer. I don’t think calling Mafia Wars an MMOG is especially useful even as a thought exercise (and if you’ve read this column for a while, you may have noticed that I’m extremely fond of thought exercises). 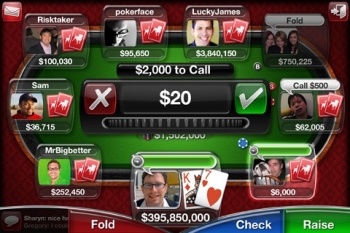 But then there’s Zynga Texas Hold ‘Em Poker. And this is where the mother of all proximal concurrency starts to take shape. Circa September of 2009, Zynga said they had 15 million monthly players of their poker game, which is available on multiple platforms (Facebook, MySpace, the iPhone, and several more). When I logged in late on a Monday night, there were 240,000 players present – more than double 1 vs. 100‘s record, and Zynga hits that kind of number day in and day out.

In Zynga’s poker game, all players across all platforms are competing against each other. Not just in terms of eight or ten people sitting at a virtual table and playing poker, however; that’s the spatial proximal concurrency, and it’s not the one that matters here. Those fifteen million people are also competing via temporal proximal concurrency. By playing in weekly tournaments for prizes and having their progress compared to all other participating players, the effective proximal concurrency is everyone who is competing across the span of an entire week. Do well enough and Zynga will ship you a flat-screen TV, or whatever googaw they’re giving away this time around; would you trade your level 60 Night Elf for that?

John Scott Tynes regrets that he cannot generate his own concurrency, being a singular human rather than some kind of hive mind.