I would like to begin this month’s column by assuring you I do not get paid by the page view. This month’s topic is driven purely by creative juices, not by cash incentives. If cash incentives were involved, I would devote my columns to Why Console X Is Better Than Console Y and just keep changing X and Y every month in order to generate fresh outrage.

Let’s talk about videogame sex. I see three main categories of sexual content in videogames: Sex Appeal, Titillation, and Actual Sex. Sex Appeal covers the Lara Crofts of the world: primary or secondary characters who are designed to look sexy so you want to spend time with them in a game. Titillation is the Mass Effect/ God of War model where carefully composed sex scenes transpire just off camera. Actual Sex is rare outside of Japanese erotic games (“eroge“) but GTA’s infamous Hot Coffee minigame and the very Hot-Coffeeish sequence in the game Fahrenheit (Indigo Prophecy in the U.S., with the sex removed) qualify just fine.

I would further postulate a few different ways to use sex in videogames: Marketing, Narrative, Gameplay, and Reward. Marketing is straightforward: see Bayonetta, a game whose main character delivers the potent brand message that this is a game you will masturbate to. Narrative is the domain of Bioware and eroge, wherein sex is overtly present but is there as part of the storytelling. Gameplay gets us Hot Coffee, Fahrenheit, and God of War, in which you are playing some sort of minigame to actually control the sexual act itself, whether it is depicted onscreen (Hot Coffee, Fahrenheit), or offscreen (God of War). And finally there’s Reward, such as the Tetris/Bejeweled clones that slowly uncover a photo of a bikini model as you clear each level.

So with that framework in mind, let’s talk about sex, baby.

In America, videogames are just like other mass media in having that strange and volatile combination of prudishness about sex and the constant exploitation of it. Mostly this is expressed as cartoonishly sexy female characters turning up to briefly interact with the grunting, steroidal males who are too busy constantly killing things to really notice. If the women show up for too long they have to get killed so the men can go berserk and demand vengeance. They’re basically Wendy and our characters are the Lost Boys and I think that means Cliffy B is Peter Pan? This stuff gets confusing.

Bioware operates at a different extreme. It uses sex in its narratives in some misguided act of defiance to help make its fairly tiresome case that this is real storytelling here, people, okay, a case which I am obviously yet to be convinced of. Watching a short clip of my character snogging with a blue alien to a smooth jazz soundtrack in between repairing malfunctioning robots and selling story tips to journalists while apparently procrastinating on the whole universe-going-up-in-flames front – well, let’s just say the PG-13 blue alien sex didn’t fool me into thinking I was suddenly watching “The Sopranos” or “Battlestar Galactica.” This “please take us seriously” approach is also the domain of Valve’s Half-Life 2, in which costar, Alyx, has been carefully crafted to be a compelling character who is quite pointedly not jerk-off fodder. It’s the fact that she isn’t cartoonishly sexy, unlike most videogame women, that makes Valve’s agenda transparent: They want to be respectful and thoughtful about the role of female characters in games, and so in the genre slot where a cartoonishly sexy sidekick usually goes, they give us a reasonable approximation of a real woman. (Although there are other opinions on this.) 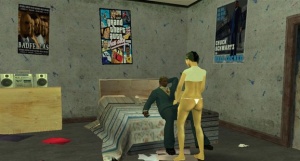 If we stick with this continuum for a little longer, with Lara Croft at one end and Mass Effect at the other, that brings us to God of War and Fahrenheit, which lie somewhere in the middle. These games use sex for gameplay, with you controlling the pelvic thrust action of Kratos or that possessed guy in Fahrenheit. Of the two, I favor God of War’s approach where the sex is just a quick diversion, not a plot point, and the fact that you’re controlling the pelvic thrusts of a sex scene happening off-screen is actually kind of funny as a brief respite from all the chain-swinging. Fahrenheit doesn’t have a sense of humor – and I mean, not at all – and so when the two main characters finally get around to having sex it’s just another minigame. The fact that it happens right on screen in full view, Hot Coffee style, only makes it more disconcerting.

So where do we go from here? I would posit that the Marketing approach has nothing interesting to discuss and that the Gameplay approach is really fairly stupid. That leaves us with Narrative and Reward and that’s the intersection that I really want to talk about.

One of my problems with the sober, respectful attitude towards sex from Bioware, Valve, and its politically correct ilk is that you don’t get the feeling those developers have ever had sex. Real sex, just for example, is completely awesome. It’s a blast. It’s a thrill. People spend hours, days, even years pursuing sex. If sex stopped tomorrow, but you could still make babies in test tubes, the human race would become extinct anyway. Sex is raw, messy, and embarrassing and we all want to do it pretty damn often. Sex is joy, sex is life, sex is fun.

That’s what’s missing from most videogame sex. At least God of War treats it in this spirit: Kratos is such a badass that during the brief pause he takes between slaying gods and monsters, he’ll just wordlessly throw down on the spot with two cartoonishly sexy women at the same time and then get back to slaying. It’s not a significant emotional moment for him. He’s just blowing off a little steam, having a little fun. For a guy in his position, hey, we can all relate.

So, what’s wrong with that? I’d like to posit we are an industry built to deliver intense power fantasies with lab-tested reward mechanisms, fantasies larded with graphic violence that is itself a form of titillation – Gears of War doesn’t have you chainsaw aliens in half to make a point about the futility of war, after all, it does it to make you feel good. And given that this is the case, why are we being such prudes about sex? Must we be just as hypocritical about “violence is okay but sex is not” as the rest of our culture?

We should be using sex as a reward mechanism. If I’m going to spend two hours chainsawing sixty or seventy guys in half, then for God’s sake let me spend even a fraction of that time having sex with ten or twenty attractive partners of my preferred gender, one every few minutes. Would that be so wrong? Are those numbers so off? In games with achievements for killing 50,000 people, how crazy is it to make some love, too?

I’m being a little tongue in cheek here, of course. But when you look at our toolbox of rewards for players – things like experience points, skills, new weapons, new clothing – doesn’t it seem like we could get sex in there somehow? I think a lab-tested breadcrumb trail of titillation that led you through the experience and was connected to the game’s progression system would be a powerful idea. “If I can just finish this level, I get to visit the Harem of Ten Thousand Dreams and unlock the next Concubine!”

I’m not arguing for Actual Sex in games. I think the Bioware level of titillation is fine. But instead of putting it into your game for the sake of your narrative ambitions, let this be a game. Reward the player with a little sex. Let them pick the kind of partner they dig and then tease them with sexual access to that partner. Which would you rather do: play the same level ten times to unlock the boss fight or play it ten times to unlock the titillation scene with Nude-Mod Alyx or that silver-haired andro-boy from your favorite Final Fantasy game? Players might actually finish our games if we just let their fingers do the walking . . .

John Scott Tynes kind of wishes the Puritans had just kept on sailing and that instead America had been colonized by swashbuckling pirates. You know, like Australia.