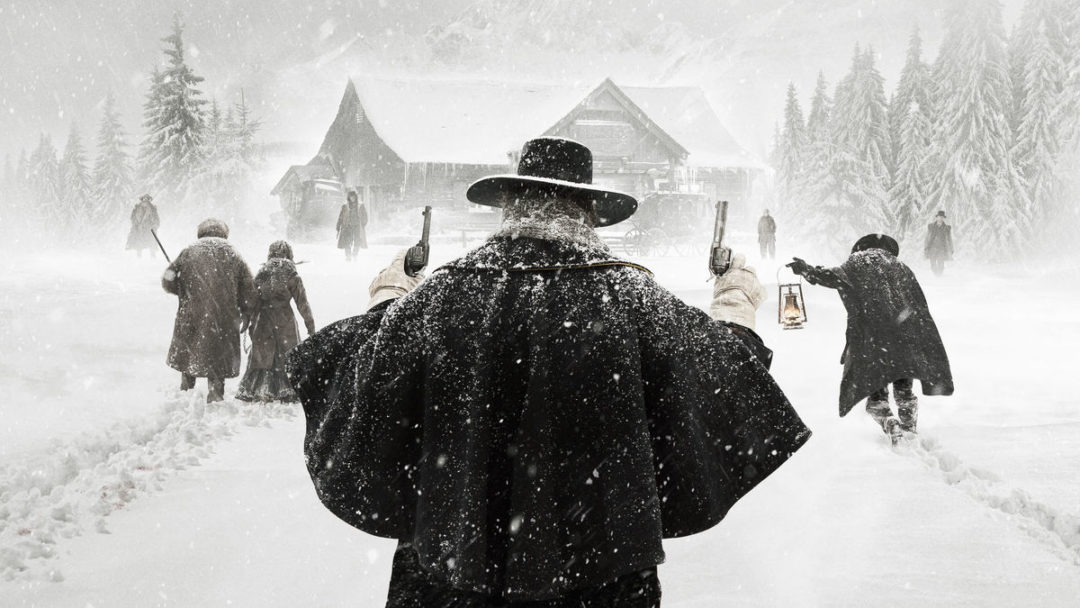 Every film that Quentin Tarantino has released since 2007’s Death Proof has been a period piece. Once Upon a Time… in Hollywood will be set against the turbulent late sixties, using the Manson family murders as a plot element. Inglourious Basterds was set during World War II. Django Unchained unfolded in the lead-up to the Civil War. The Hateful Eight explored the aftermath of that conflict, and Tarantino originally conceived it as a tie-in novel sequel to Django Unchained with the proposed title of Django in White Hell.

Tarantino’s movies are not conventional historical films grounded in reality. Inglourious Basterds features the brutal machine-gunning of Adolf Hitler by a crack team of Jewish commandos inside a burning cinema. Similarly, Django Unchained leans heavily on “Mandingo fighting,” which was virtually nonexistent in real life not necessarily for moral reasons but because destroying assets so casually was not economically justifiable.

Instead, Tarantino draws from a more vaguely defined cultural memory that’s shaped by pulp storytelling. His historical epics are often framed by genre convention as much as by anything that actually happened. The Hateful Eight is one of the most notable examples. The film has all the trappings of a Western. There are pistols, stagecoaches, spurs, and hats. Señor Bob is so committed to the aesthetic that he even wears his hat both under his hood and indoors. There is even somebody claiming to be an honest-to-goodness cowboy in the form of cattle-driver Joe Gage, the melancholy figure who describes himself as “a coming home for Christmas to spend time with mother type.”

But, underneath its cowboy hat, The Hateful Eight is actually a horror movie. It is a tale of murder and violence in a tightly confined setting, built on paranoia and uncertainty. Like a lot of horror movies, the fears that underpin The Hateful Eight concern the very nature of civilized society: the idea that the entire social structure is a fabrication that masks something monstrous. The notion of social conventions providing cover for atrocity has become increasingly popular in horror films such as Karyn Kusama’s The Invitation or Ari Aster’s Midsommar. Both literally and figuratively, there is something hiding in the basement for most of The Hateful Eight. 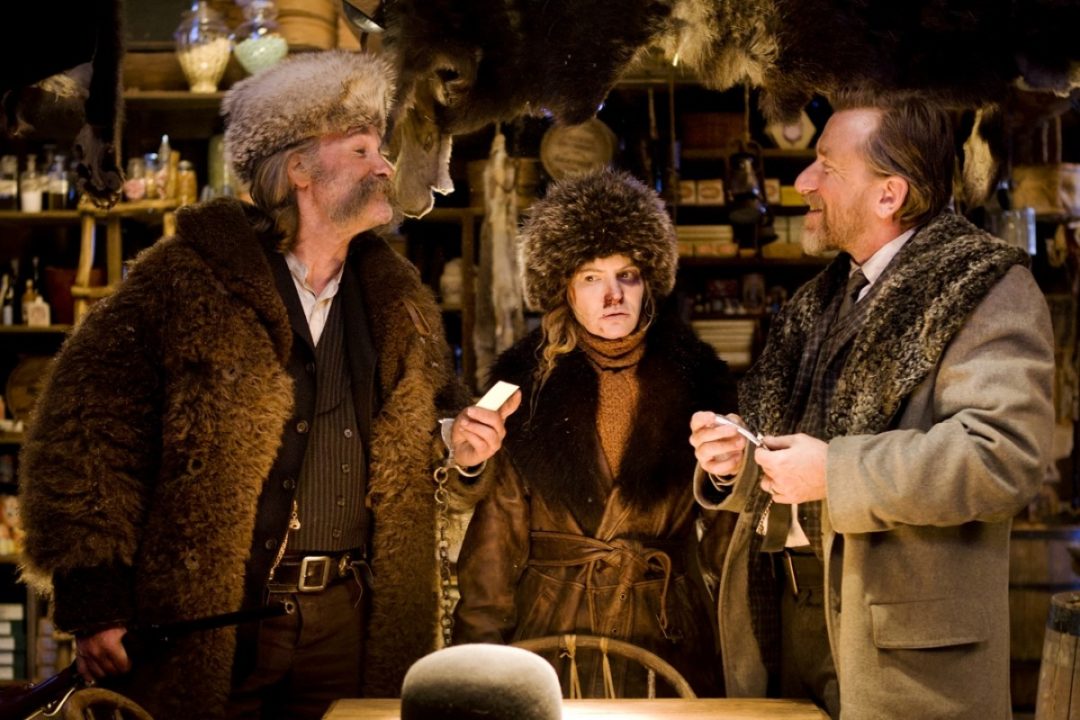 Tarantino confessed to Christopher Nolan during a Directors Guild of America screening of the film that The Hateful Eight was primarily inspired not by Westerns but John Carpenter’s 1982 horror film, The Thing. Both follow a group of men thrown together by freezing weather in a confined space who are confronted with the possibility that at least “one of them fellas is not what he says he is.” In both, the uncomfortable situation quickly escalates to violence.

The Hateful Eight owes more to The Thing than the plot. Kurt Russell appears in both films and Ennio Morricone drew heavily from his unused soundtrack for The Thing for soundscape for The Hateful Eight‘s score. Certain sequences echo between the two movies, like laying down a line to connect parts of the facility in a blizzard or watching the unloading of transport through a window.

Like The Thing, the horror underscoring The Hateful Eight is essentially body horror. It is the legacy of slavery, the philosophy that reduced the human body to a tradable commodity. Tarantino explicitly compared bounty hunting to slave trading in Django Unchained, the trading of flesh as sanctioned by legal and moral authorities. The Hateful Eight returns time and again to the question of how the state sanctions such violence. Sheriff Chris Mannix asserts that to leave him to die when “there ain’t no bounty on [his] head” would be “murder,” executioner Oswaldo Mobray gives a lecture on the difference between lynching and justice, and Major Marquis Warren goads General Sanford Smithers into a situation where he might justifiably be killed in self-defense while leaving Warren “supremely confident about the legality of what just transpired.” 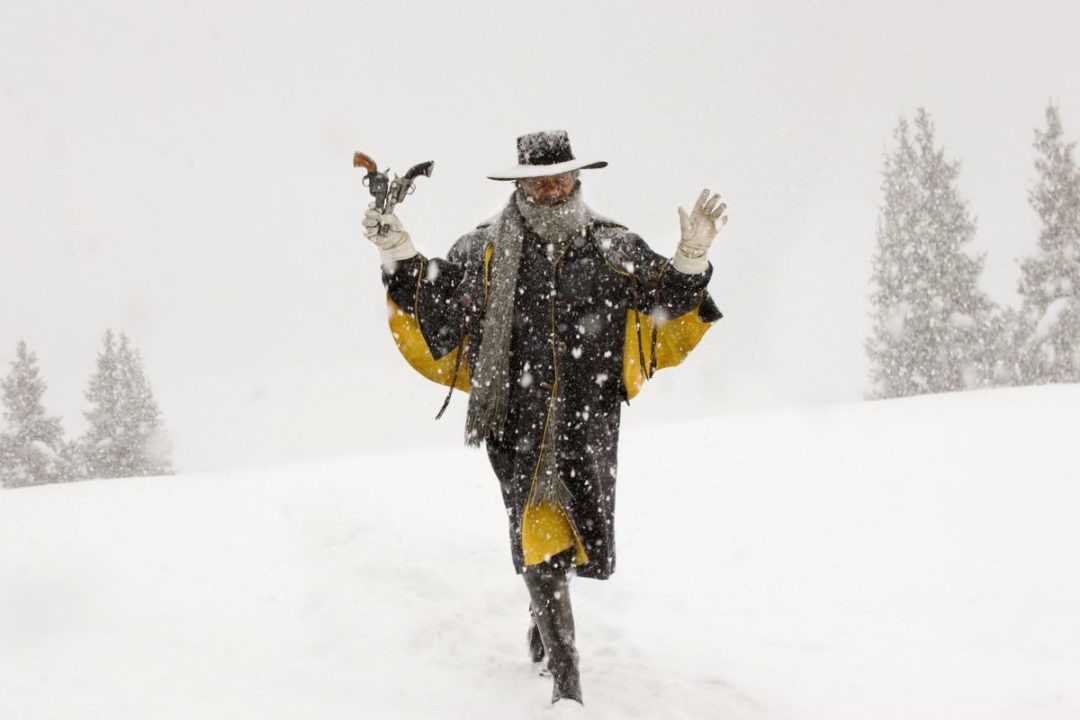 The Hateful Eight keeps returning to the horrors inflicted on the human body with scenes like Daisy getting her teeth knocked out, blood spraying from John Ruth’s mouth as the poison in the coffee cup takes effect, and Daisy hacking brutally at Ruth’s shoulder to separate it at the joint so that she might escape the chains tying her to him. Early in the film, Tarantino presents a grim tableau of stacked dead bodies on a winding winter road, Warren perched atop them. A recurring emphasis on chains ties everything back to the horrors of slavery. For instance, Ruth expects the African American Warren to wear chains before he’ll let him into the stage coach, but he doesn’t insist on the same treatment for the former Confederate marauder Mannix.

These two recurring motifs are brought together at the end of the film for one last grim joke. As Mannix reads aloud from the fabricated Lincoln letter that Warren carries with him, a lie that gives him acceptance from his white peers, the camera pans up to Daisy’s hanging corpse. As Mannix quotes the letter’s assertion that “we still have a long way to go, but hand in hand I know we’ll get there,” the camera drifts past Ruth’s dangling arm still chained to Daisy. Even for the cold “white hell” of The Hateful Eight, that is an ironic reading of “hand in hand.” It’s also a grim, brutal payoff to Warren’s earlier assertion to Ruth that “the only time black folks are safe is when white folks is disarmed.”

Tarantino underscores this sense of horror in his choice of framing, which comes from shooting a movie that mostly takes place indoors in the 2.76:1 aspect ratio historically used for cinematic panoramas in epics like Ben-Hur and How the West Was Won. The superwide format allows Tarantino to frame characters and groups so that they appear small and isolated even within an otherwise crowded environment. In The Hateful Eight, everybody is alone, even when they’re surrounded by everybody else. 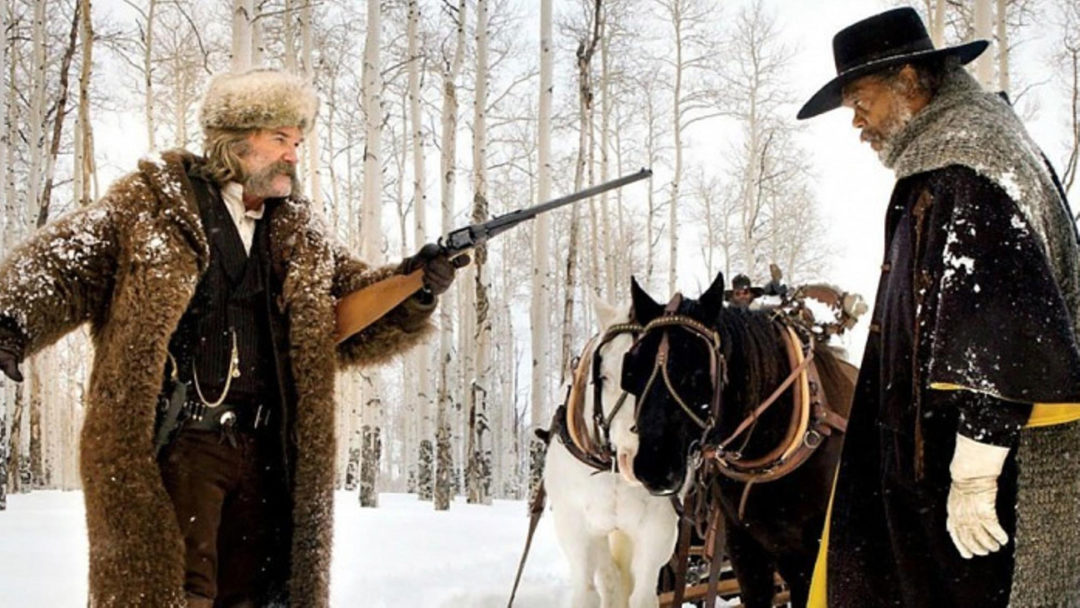 The Hateful Eight emerged as part of a broader movement in the contemporary Western, pairing the trappings and tropes of the genre with a stylistic sensibility that drew heavily from horror. The Revenant was set on a lawless American frontier, but it often looked and felt like a survival horror. Bone Tomahawk borrowed the basic narrative structure of the John Wayne film The Searchers and wed it to the tone of The Descent. These sorts of films suggested a deep and growing unease with the myth of the American frontier, filtering the vague cultural memory of the era through a nightmarish lens.

The Hateful Eight cynically argues that all civilization is just pantomime and that the veneer of society is just a fabricated illusion. Nobody within the confines of that small wooden cabin is who they claim to be, with possible exception of Ruth himself. Even Mannix never proves that he is the new sheriff of Red Rock. A flashback reveals how carefully the entire environment has been stage managed, right down to characters adopting funny accents and redressing the scenery in preparation for a grand ruse.

Tarantino is hardly subtle in this suggestion. Hoping to diffuse an escalating argument between Warren and Smithers that threatens to “restage the Battle of Baton Rouge during a blizzard in Minnie’s Haberdashery,” Mobray suggests dividing the interior of the small wooden cabin into “the Northern side and the Southern side” in a manner that explicitly evokes the separation of the United States itself following the Civil War. This is the heart of Tarantino’s horror, a nation still fighting that destructive conflict, even in the most innocuous of locations.

With that central horror laid bare, The Hateful Eight cements Tarantino as a chronicler of lingering American nightmares.