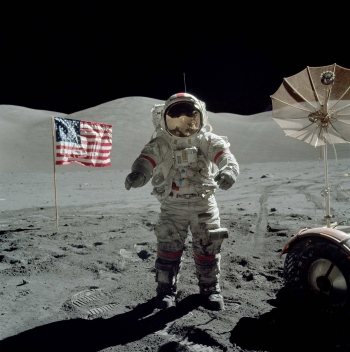 Image Source: The Last Man on the Moon on Facebook

The documentary film tells the story of astronaut Eugene Andrew “Gene” Cernan, the last person who ever set foot on the Moon.

Eugene Andrew “Gene” Cernan is the last human being to walk across the lunar surface. Now 80 years old, Cernan is the subject of the documentary film Last Man on the Moon, an intimate account of Apollo 17, the final mission of the United States’ lunar landing program. The documentary tells Cernan’s story through firsthand accounts and interviews, as well as Apollo-era photographs and footage. Cernan, his family, and NASA celebrities appear in the documentary, sharing their experiences of the mission. A trailer for the 99-minute documentary by Mark Stewart Productions was released this month, and the film has been shown at some special screenings and festivals. The documentary will be released in the UK this year. A US release date has not been announced.

“I really wanted to reach out, stick it in my spacesuit and bring it home and show it to everybody: this is what it feels like,” says Cernan, reflecting on his experiences on the Moon. Apollo 17 was Cernan’s third and last spaceflight. Cernan served as commander for the mission, and among his other duties he conducted three moonwalks and drove the Lunar Roving Vehicle across the Moon’s surface. Apollo 17 launched in the early morning of December 7, 1972, and returned to Earth on December 17. The crew spent a total of three days on the surface of the Moon.

Cernan may not hold the title of “last man on the Moon” for long. Commander Chris Hadfield believes we will establish a permanent lunar colony within 40 years. China’s recent successful moon rover landing has prompted discussion of a manned mission from China, while others, like the Mars One program, have set their sights on visiting the red planet.

Source: Last Man on the Moon via Universe Today