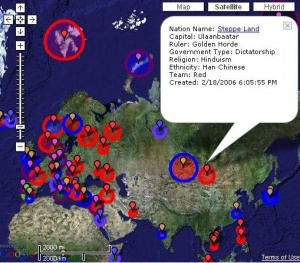 War. What is it good for? In the world of Cyber Nations, quite a bit, actually.

Cyber Nations is currently the most active of a number of nation-building games popularized by the likes of NationStates, a game that itself was formed as a promotional activity for the creator’s book. Cyber Nations allows the player to develop a nation along any political viewpoint he desires, creating armies and forging alliances all through the 40,000-strong community.

Such an online base who plays daily, create their own content and make their own communities is the kind of thing most game companies would spend millions on. Yet Cyber Nations, which has no advertising or full-time staff, has done nothing of the sort.

The Cyber Nations fans that have sprung up in the past 18 months seem fanatical in their devotion, plotting wars in various factions, keeping track of the latest developments across the virtual world and recording every major historical turning point in frighteningly-detailed wikis.

We asked Kevin Marks, creator and admin of Cyber Nations, to explain the art of internet diplomacy.

The Escapist: Firstly, can you describe Cyber Nations to us in your own words?

Kevin Marks: In the most general of descriptions, Cyber Nations is a browser-based game about simulating nation building and management through economic development and defending one’s interests in war. Right now, the game simulates roughly 40,000 active nations. What makes the game great is not the game itself, but the community within it. The community and player interaction that occurs off-site is where the real fun lies. The game itself is just a place to determine who has more bark than bite or not.

TE: Can you tell us about how Cyber Nations got started?

KM: When I was around 13 years old, I came up with a simple world map-based game that involved push pins to indicate captured cities around the world. Whichever player controlled the most cities and resources won the game. When Google launched their Google Maps API publicly in 2005, the things that it allowed programmers to do with their API is what really sparked my interest in building a nation simulation game around the maps.

Initially I had envisioned making the maps the center point of the game, but through issues with providing map markers to represent thousands of nations, the maps eventually became a secondary feature of the game.

TE: Can you tell us a little bit about yourself?

KM: I started Cyber Nations when I was 24. I’m 26 now. I’m married and we just had our first child on March 29, 2007. Cyber Nations sometimes makes me feel like I have two or three full time jobs, but I somehow find time to manage it and work in the real world, too. The only way I’ve been able to manage everything is through the help of the wonderful moderation staff within Cyber Nations. They really stay on top of things and allow me to focus on code related issues, updates and other things.

TE: How interested are you in real-life geopolitical affairs? Are you a politics junkie?

KM: I wouldn’t consider myself a politics junkie, simply because I just don’t have enough time. I try to keep up with current events, but interestingly enough I tend to get a lot of my news and information by visiting the Water Cooler sub-forum in the Cyber Nations forums. When something major happens in the news, there’s always a topic or two there to read about it.

TE: How is Cyber Nations funded? Is it all through donations? 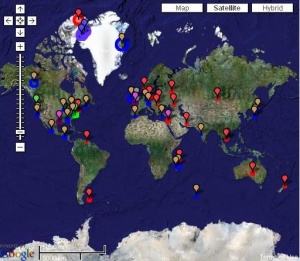 KM: Cyber Nations is funded through donations and through Google Ads that display on the site. I’ve received offers from companies wanting to display banner ads and pop-ups on the site, but I’ve declined all their offers. I just don’t want to clutter up my website like that at the expense of the users.

TE: A lot of people seem to have heard of Cyber Nations through Nation States. There are also some competitors springing up, like Lunar Wars. Do you think it’s inevitable that something will overtake Cyber Nations someday, as Cyber Nations overtook NationStates?

KM: I don’t think Cyber Nations has overtaken NationStates. If you look at the Alexa traffic rankings, NationStates is still active and doing well. I like to think that each site out there provides its own unique “thing” to interest players. I have come across a few copycat sites, which is both an honor that another programmer would be inspired by my work, but at the same time it is disappointing, since it’s not difficult to be creative and create something new instead of copying what’s already out there.

TE: One thing that has really surprised me is the level of devotion of the community. What attracts and keeps players in Cyber Nations, and how did you build up such a big community in 18 months?

KM: I think it has something to do with the fact that something is always happening in Cyber Nations. Every time I log in there is something new going on, one group flexing their muscles and on the brink of war, another group trying to keep the peace, another group getting caught for spying on another alliance. … It’s that kind of excitement that seems to drive new players to the game and keep them coming back.

TE: Speaking of the community, are the key players from the early days still there? Do players come and go a lot?

KM: I’d say there’s a mixture of both. We’ve still got a lot of players that started in the game just days after it launched on January 6, 2006, and have been active in the game ever since. We also get a lot of new users who pass by and don’t stick around for whatever reasons. We’ve got roughly 40,000 active nations, but over 100,000 nations have come and gone since the game started 18 months ago.

TE: The other thing that has really impressed me is the almost fanatical level to which the entire history of the game world has been transcribed and recorded in the wikis. Alliances rise and fall, wars come and go. What has been the defining or most memorable moment in the history of Cyber Nations for you?

KM: The most defining moment for me came in March 2007 during what players have come to call Great War III or GWIII. During times of war where thousands of players engage one another on a massive scale like we saw in GWIII, the game servers have a difficult time staying up with performance. With the site having performance issues during much of March, I stayed very busy with the game and, as I mentioned before, our first child was born on March 29, 2007, so it was both a very busy and exciting time for me.

TE: How far do you go to make the game realistic? For example, only the top 5 percent of nations can get nuclear weapons. What does that say about North Korea?

KM: When developing Cyber Nations on a MMOG scale, it was important to make the game fair. Because of that, some sacrifices were made for gameplay purposes. For example, the 5 percent rule was added because of massive outcry from the
community that the game was too unrealistic with nuclear weapons so readily available and being used on a massive scale like we saw before the 5 percent rule was added.

TE: Where do you and Cyber Nations go from here? Do you have any interest in developing a commercial version of this, or any other game?

KM: Cyber Nations has grown far beyond my wildest expectations for the game when it first started. Of course, I’ll always keep options open for new opportunities that may come for the game, but if things just remain as they are now I’ll be happy with that, too.

My main goal is to continue to provide for Cyber Nations for as long as people are interested in it. Along with Cyber Nations, I’ve got a couple of other browser-based games that I’m working on, even though I have absolutely no time in my schedule to manage. I guess that’s the story of most web developers, though. Too many great ideas and not enough time in the day.