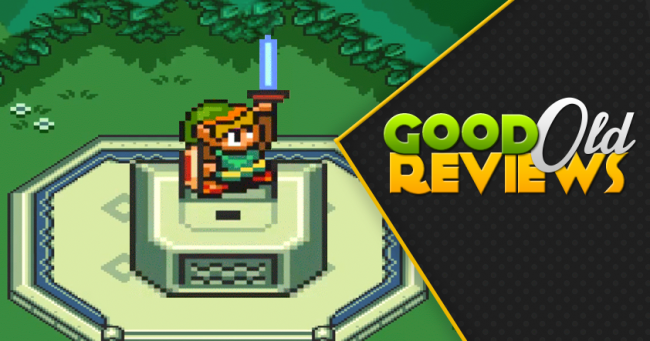 There are 18 games in Nintendo’s core The Legend of Zelda series right now, and thanks to the various remastered and Virtual Console editions, almost all are still available to play on modern systems. That’s fantastic for historical preservation, but kind of a pain when recommending which Zelda game new players should start with. Starting with the 1986 original is an exercise in frustration – it expected players would take careful notes or discuss clues with friends to finish the game. Simply diving into a random point in the franchise, meanwhile, might raise confusing timeline questions which Nintendo used an entire book to keep straight. And that’s not even getting into spin-offs like Hyrule Warriors or the Zelda CD-i games. (Although the less said about the latter, the better.)

At the moment, most fans would probably recommend either Ocarina of Time or the SNES A Link to the Past as Nintendo’s definitive Zelda games. Both offer solid introductions to characters like Link, Princess Zelda, and Ganon while easing players into Zelda‘s well-established mechanics. But where Ocarina of Time is fondly remembered for a time-traveling story we’re all nostalgic for, A Link to the Past might be my personal starting recommendation. Not only have its visuals and controls aged remarkably well, it teaches advanced gameplay systems with the bare minimum of story prompting.

The tutorial alone involves sneaking into a castle, watching your uncle die, fighting dozens of soldiers, and rescuing a Princess in the time it takes Ocarina‘s Link to wake up and chat with the neighbors. If you need a Zelda game that moulds you into a hero quickly, this game is the one you want to start with.

A Link to the Past takes place in-between The Legend of Zelda and Ocarina of Time, as Hyrule faces yet another magical evil. The wizard Agahnim has secretly taken control of the kingdom and its army, and now aims to break the ancient seal imprisoning Ganon in the Dark World. You play as Link, awakened one night by a telepathic message from Princess Zelda, starting a quest to free her from a dungeon, explore the kingdom, and save Hyrule from the dangers which threaten it.

Just like most Zelda games, A Link to the Past places a strong emphasis on exploration. After the brief tutorial, you’re free to go just about anywhere on the world map with the bare minimum of hand-holding. Monsters and threats aside, it’s a wonderful feeling to walk across Hyrule at your leisure, uncovering new regions and dungeons along the way. That’s not to say A Link to the Past is impressive because it boasts a grand world – in fact, the overworld is fairly small by most gaming standards. Hyrule only consists of a single village, a castle, and a handful of environmental regions. Even in context with the series, this almost feels like a step back from Zelda II: The Adventure of Link‘s grand maps and scattered towns.

No, what’s impressive is that A Link to the Past makes full use of its world size. Exploring dungeons and overworld regions is equally important on the micro scale, with hidden caves, items, or health-regenerating fairy pools tucked into every nook and cranny. You can explore Hyrule for hours and not be completely sure you’ve discovered all of its secrets. Unlike some open world games, just about every region you visit has some charming touch or hidden passageway which makes it feel like a unique place. 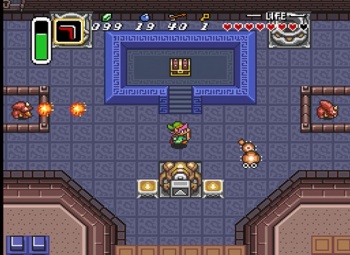 Then you have the Dark World, The Legend of Zelda‘s first attempt at exploring parallel world systems. As the game progresses, Link can access an alternate dimension which was corrupted utterly after Ganon was trapped here in Ocarina of Time. The Dark World presents a bleaker, twisted version of the Light World, with building placements and environments reflecting Hyrule’s general layout. It’s appropriately threatening and foreboding as well, filled with new, more powerful of monsters and skulls replacing the standard breakable pot. Even today, these sequences hold up fairly well, even compared to later Dark World variations like Ocarina of Time‘s future overworld. And unlike Ocarina of Time, it’s possible to jump between worlds at will, reaching impassable locations in the Light by finding its equivalent region in the Dark.

On the whole, A Link to the Past‘s story is well-presented too, although it takes a firm back seat to gameplay. There’s an epic mythology in the background addressing Ganon, the Sacred Realm, and Hyrule’s history which made the SNES manual feel like a Hyrule Historia chapter, but you can ignore it entirely. The moment you start a new game, all you see is Link, his uncle, and a few dialogue text boxes establishing a telepathic connection to Zelda. And it works – the music and minimal story lend just enough dramatic weight to make you feel invested in even this simplistic story. After all, there are few underdog scenarios more riveting than a child sneaking into a castle of armed guards during a rainstorm to save a princess. Even better, there are virtually no cutscenes or scripted sequences which distract you from gameplay, letting you dive into the action by controlling Link right away.

That’s not to say the presentation is without problems. Nintendo clearly wanted to tell a grander story than NES Zelda games allowed for, but didn’t substantially tweak the formula to allow for it. That means you’ll have to sit through the occasional massive text dump, breaking the flow you’d been experiencing thus far. A disappointing example occurs when you first defeat Agahnim and are dropped unceremoniously into the Dark World – at which point a wall of text details what happened to you and what the next seven quests should be. 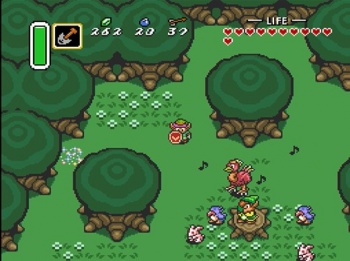 Thankfully, the gameplay is solid enough to distract you from most story flaws. As a series, The Legend of Zelda is often criticized for recycling the same weapons and gameplay with few substantial changes – obtain the boomerang, hookshot, Master Sword, collect the Triforce, face Ganon, watch the end credits, repeat. But that’s really a testament to how much Zelda got right early in the series, as A Link in the Past‘s simplified top-down format shows. You’ll explore the overworld to find dungeons, complete those dungeons to collect ability-granting objects, and use those objects to access new overworld locations. It’s a well-refined system, keeping the focus on your abilities instead of locking dungeons behind arbitrary story events.

Put it all together, and what you get is the first Zelda game which was truly capable of standing the test of time. The NES Zelda games may have pioneered the series and gameplay, but the Herculean task of finding everything needed to defeat the final boss is excessive without a walkthrough. A Link to the Past refined the gameplay, offered a distinctly pleasing 16-bit visual style, and presenting a story which engaged players while keeping focus on the action. and tossed in an epic but charming soundtrack to boot.

Other games might have better stories, or unique gameplay innovations. But to me The Legend of Zelda: A Link to the Past is still one of the best Zelda games, a definitive experience which deserves to be played for decades to come.

Next week, we’ll catch ’em all – or as many as we can – while looking at the 3DS re-releases of Pokemon Red, Blue, and Yellow.