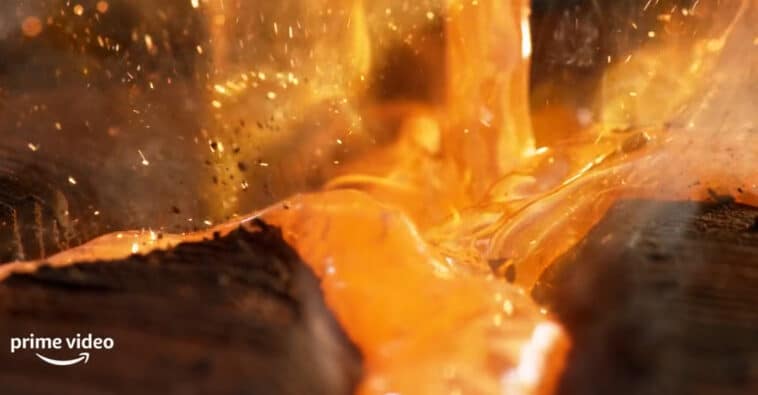 There may be one ring to rule them all, but Amazon’s new Lord of the Rings series appears to be focusing on all of them. Amazon released a video clip for the upcoming series, which confirmed the title of the TV series to be The Lord of the Rings: The Rings of Power.

A new age begins September 2, 2022. Journey to Middle-earth with The Lord of the Rings: The Rings of Power. #LOTRonPrime #LOTR #LOTRROP pic.twitter.com/KWAokaVeWW

There isn’t much to the clip, giving us even less of an idea about the show than the first-look image did. The teaser shows the titular rings (or the title’s text) being forged as the iconic text by J.R.R. Tolkien about the rings is spoken over it, reminding us all that the Rings of Power were forged and that three of them went to elves, seven to dwarves, and nine to men, corrupting them all as Sauron forged the One Ring. We already knew that the series would take place before the Lord of the Rings film / book trilogy, but this seems to establish the timeline as somewhere in the late Second Age of Middle-earth when the rings were corrupting the souls of men.

“This is a title that we imagine could live on the spine of a book next to J.R.R. Tolkien’s other classics,” said showrunners J.D. Payne and Patrick McKay. “The Rings of Power unites all the major stories of Middle-earth’s Second Age: the forging of the rings, the rise of the Dark Lord Sauron, the epic tale of Númenor, and the Last Alliance of Elves and Men. Until now, audiences have only seen on-screen the story of the One Ring – but before there was one, there were many… and we’re excited to share the epic story of them all.”

The Second Age occurred thousands of years before the adventures of Frodo and the destruction of the ring. The show will feature some familiar characters (elves live a reaaaally long time) and a host of new ones as an ensemble cast confronts the re-emergence of evil in Middle-earth. If the series follows the book we will probably see Númenor’s drowning by Sauron and, for those who haven’t read The Silmarillion, discover just how the rings caused the downfall of the Second Age of Middle-earth.

With its fresh new title, The Lord of the Rings: The Rings of Power will release on Amazon Prime and straight to your TV on September 2.