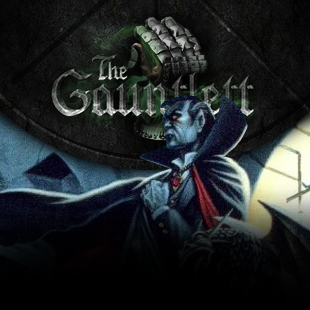 ‘I have been so long master that I would be master still, or at least that none other should be master over me.’
The Bram Stoker, Dracula

Back in the 1980s when the world was young, Tracy and Laura Hickman were broke. A business deal had gone south and taken $30,000 of their savings with it, so when TSR approached them with a job offer, so long as they moved to Wisconsin, they were eager and willing. Despite dire warnings from their parents the Hickmans took the plunge, and thank God they did, else Count Strahd von Zarovitch and the whole Ravenloft experience might have remained just another Halloween adventure prototype.

The 1983 Dungeons and Dragons Intermediate scenario Ravenloft is the ur-text for the setting, which the Hickmans had been working on for years before their trip to Wisconsin. In it, four to six adventurers who’ve grown tired of life invade the forbidding Hammer Horror castle of Count Strahd, explore it from deepest oubliette to tallest spire, and hopefully put an end to the vampire’s reign of terror. It’s not as lethal as that old favorite, Tomb of Horrors, but it does have a well-earned reputation as a mincing machine, capable of devouring entire parties in a single encounter.

Gamers loved it. Sure, it was huge and full of action, action, action, but it also featured one of the most interesting villains in tabletop roleplay. Count Strahd and his obsession with a long-lost love dominates not just the scenario that introduced him to the world, but the entire Ravenloft gothic horror aesthetic. Horror in Ravenloft the setting isn’t about jump scares and oceans of gore, or even about monsters; it’s the terror that comes with tragedy, the nightmare created by obsession and dark desires.

In the Ravenloft core setting, first published in 1990 by TSR and later reworked in the early 2000s through White Wolf’s Sword & Sorcery imprint, you play as a hero in a gothic landscape. The setting is divided up into a number of different Realms, each with their own flavor. A Realm might be the size of a kingdom, or it might be as small as an island or village, but each is divided from the other by the Mist that encircles each one. This Mist serves a twofold purpose: it enforces the mystery behind the workings of the world by preventing easy navigation between Realms, and it allows the Dungeon Master to create entirely new Realms of their own devising, letting these Realms emerge from the Mist.

Each Realm is dominated by one Darklord – Strahd in Barovia, undead wizard-king Azalin in Darkon, and so on – whose personalities and desires create and fundamentally shape, or change, the Realm they inhabit. So, where Strahd is obsessed with his beloved, Azalin mourns his dead son, and is driven by a desire to change things, or at least become a better parent. His experiments with cloning, and a strange invention, end up killing every living creature in Darkon’s capital city, and turn his only useful clone-son into Death incarnate. Thus the cycle continues, with each attempt to somehow ‘fix’ things creating new horrors, which the characters then have to deal with.

The 1990s TSR supplements have a lot to recommend them, but when Wizards of the Coasts bought out TSR, Wizards felt it had little use for ghosties, ghoulies, and things that go bump in the night. It was happy to let White Wolf, already well known for its horror titles, go to town with its gothic IP. The Sword & Sorcery Ravenloft series for 3.5 Edition D&D is a whole lot of horrific fun, and are the books you’re most likely to find if you go searching through second-hand shops or a convention’s merch hall. Speaking personally, I swear by them, and I’m about as far from a fantasy RPG guy as you can possibly imagine. 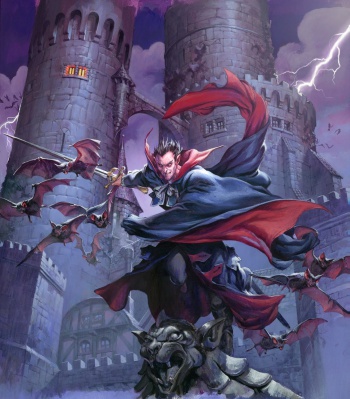 All of which brings me to the books I’m going to recommend to you now: Ravenloft Player’s Handbook, Ravenloft DMG, and Van Richten’s Guide to the Walking Dead, all published 2003 by Sword & Sorcery.

Obviously it would be useful to have more than that. It’d be useful to have a million dollars and a monkey butler, but lacking those, these three books are a great kick-off for gothic horror fantasy fun. It uses the standard d20 3.5e ruleset, and could be used with any game that incorporates that ruleset; Pathfinder, for example.

The Player’s Handbook, a 256 page hardback, isn’t just about how to build a character and what feats you ought to choose if you want to play the Monkey Butler prestige class. From chapter three onwards – so for more than two thirds of the book – the Handbook talks about the kind of setting Ravenloft is, the sort of realms you can find there, the vampires, ghosts, and other creatures you may encounter, and, in the final chapter, the elements of a gothic campaign and how to use them. Remember, this is all for the players; an excellent introduction to the kind of adventures they might get caught up in, and what it means to be a hero in this strange and forbidding landscape. Even if you only ever intend to be the Dungeon Master you’ll still need this book.

The DMG, a 238 page hardback, takes the background information given in the Player’s Handbook and expands on it. More information about the world, about campaign structure, techniques for creating terror, how to deal with magic, new races, new cursed items. Chapter Two, on the world and its horrors, and Chapter Three, about structuring a campaign, are the most useful sections of the book. Even if you’ve never run a game like this before, Chapter Two gives you every bit of information you need to understand what you’re dealing with, while the section on campaign structure is packed with ideas and suggestions on how to best shape your game.

There are many Sword & Sorcery supplements that could be useful to a Dungeon Master – the Monstrous Compendium, for starters – but for my money, the best bet is Van Richten’s Guide to the Walking Dead. Van Richten is a recurring character in the mythology, a monster hunter who chose to spread his knowledge by writing a series of manuals, on everything from weapons to creatures. By the time Sword & Sorcery takes on the IP Van Richten is missing, presumed dead, but his books are still out there, and the Walking Dead 119 page softback is a keeper.

Yes, it’s about zombies, skeletons, and all those other so-called mindless automata, but it’s about so much more than that. The Guide is narrated, not by the missing Van Richten, but by his monster-hunting successors, the sisters Laurie and Gennifer Weathermay-Foxglove, and it breaks up the topic into three main types.

The Obedient Dead are the ones who just follow orders, the shambling zombies and malevolent skeletons, and introduces one of the most interesting takes on a zombie horde ever: Toben the Many, an evil spirit that can spread its consciousness throughout the corpses of every person it’s ever killed. ‘Each person I collect becomes part of me, and I have collected many people. I have collected the young and the old, the healthy and the sick. Perhaps one day, I will collect you …’

The Hungry Dead includes ghouls as well as roaming, Romero-esque zombies and similar bestial nightmares. These are the ones that can bite off a limb, or swallow you whole, without breaking a sweat. There’s a lot of scope here for tailoring a specific creature for the characters to battle, like the Glutton of Ghenna, a former priest driven by a curse to devour food constantly, viciously attacking anyone who tries to stop it.

Then there are the Restless Dead, whose Cravings prevent them from resting quietly in the grave. These are the vengeance-seekers, or the multiple murderers bound by a quirk in their makeup always to kill, kill, kill in hope of somehow completing a goal whose purpose they have long forgotten. ‘Those who stand between me and my goals shall be destroyed,’ swears Ratik Ubel, ceaselessly searching for his murderer. ‘That is the power of the Craving.’

That’s exactly why I’d recommend this Guide to anyone playing a Ravenloft game. It’s not just that it has some interesting undead powers and some tips for the aspiring Dungeon Master; it’s that it takes an idea which you might think had been done to death, buried, and gone to maggots, and breathes in it new life. It offers up all kinds of interesting possibilities, both for one-off encounters and an ongoing campaign. Toben the Many on his own could make for a very satisfying campaign foe, and he’s just one of the entities in this Guide.

All these books are still available second-hand, at reasonable prices. To my knowledge there isn’t an official PDF version of any of these, nor – it seems, anyway – is there likely to be a Dungeons and Dragons revival. There was talk of folding it into the main storyline when 4th Edition was still a thing, but 5th came out late last year with little sign of any folding, though there is an interesting-seeming cooperative boardgame, which I have yet to play. For my money, though I’ve no real interest in Dungeons and Dragons any more, if Ravenloft were to be re-released as a separate setting I’d probably jump on it. I may not consider myself a fantasy guy these days, but Strahd and all his unearthly buddies push my buttons like you would not believe.