In the late 80s, playing games on a TV meant owning a Nintendo Entertainment System. Heck, back then simply being a young boy meant owning an NES, as far as my friends and I were concerned. If you had an NES, you were a somebody. If you didn’t have an NES, you’d spend an entire year riding your bike up the street to hang out with the usually intolerable Paul Paboojian (named changed to protect the intolerable) just to get a chance to play as Luigi because your STUPID PARENTS didn’t realize that owning an NES was the SINGLE MOST IMPORTANT THING IN THE UNIVERSE until your seventh birthday when a trip to Circuit City granted you a proper place in suburban childhood society.

In those blissful, early years of my gaming education, Nintendo’s position was so dominant that the phrase “play Nintendo” was at least as common as the phrase “play videogames” in popular parlance, and was understood to mean the same thing. The Atari 2600 was practically obsolete before most kids I knew were born, and while we were all dimly aware of the existence of the Sega Master System, the fact that I didn’t know anyone who knew anyone who had one meant it may as well not have existed. Back then, Nintendo meant videogames and videogames meant everything.

I don’t remember the date, but I clearly remember the day, sometime in 1990, when that simple equation got a little more complicated. I had dragged my parents to Toys “backwards R” Us and rushed to the Nintendo-filled aisle 2, as usual, when I happened upon a display featuring the Sega Genesis and a copy of Altered Beast. Five minutes of play later, I was already utterly convinced of two things.

First, it was clear that the NES wasn’t going to hold up much longer on purely technical terms. This much was unavoidable. When I first saw my human character transform into the titular beast via that iconic full screen animation, I was quite sure I had never seen anything so amazingly cool-looking in my short life.

Second, playing Altered Beast convinced me that Genesis games just weren’t as fun to play as Nintendo games. The simple walk-forward-and-punch-stuff gameplay didn’t even hold up to a simple brawler like Double Dragon II, much less to the elegant design and endless imagination of Super Mario Bros. 3.

Obviously, it was patently unfair to evaluate an entire system’s library and prospects based on five minutes spent with a single game in a crowded Toys R Us, but you know what they say about the importance of first impressions. From that day forward, I was sure, as only a seven-year-old could be, that Nintendo represented all that was true and good in videogames while Sega and its Genesis were just trying to fool people into playing stupid, unfun games using flashy graphics.

Don’t get me wrong, I wasn’t a system bigot. When I had the chance to spend three straight, uninterrupted hours playing through Bonk’s Adventure on the TurboGrafx-16 at day camp that summer, I took it. When my best friend Mason wanted to play Joe Montana Sports Talk Football on his Genesis rather than Mega Man 3 on his NES, I humored him, even though I didn’t really see the appeal.

But my first Genesis experience, combined with the steady stream of propaganda-filled previews filling my monthly edition of Nintendo Power, convinced me that my gaming future rightly lay with the Super NES. Like a virgin waiting for the wedding night, I knew with metaphysical certainty that waiting would be worth it in the long run. I knew a few more months replaying Super Mario Bros. 3 four billion more times would pay off in years of gaming bliss once I was playing with Power… Super Power!

I had to be absolutely certain, because there was a lot riding on my choice. My parents were reluctant enough to let me use a year’s worth of saved-up allowance money to buy a single 16-bit system, much less hedge my bets by investing in both of the top two contenders. “What’s wrong with the Nintendo you’ve got?” they’d ask when I’d bring it up. “Will this new one work with your old games? You mean you need to buy all new cartridges? Do you realize how many NES games you could buy with $199?” My parents’ limited indulgence was only going to give me one shot at this, so I had to make it count. 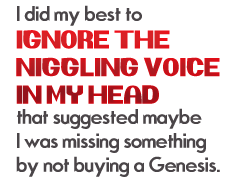 Of course, my increasingly rabid interest in everything associated with videogames made the decision harder than it had to be. The appeal of games like Sonic the Hedgehog was self-evident, as was the wacky brilliance of early Genesis titles like ToeJam & Earl, Streets of Rage, and Kid Chameleon that I was exposed to by my Genesis-owning friends and magazines like Electronic Gaming Monthly. I couldn’t stand the fact that I had to choose between owning games like those and having the opportunity to own titles like Super Mario World, Super Castlevania IV and Gradius III.

But I’d made my decision to wait, and I did my best to ignore the niggling voice in my head that suggested maybe I was missing something by not buying a Genesis. Usually, that voice belonged to Tim, a friend-of-a-friend who sat at my usual lunch table in sixth grade. Tim was practically my polar opposite: loud, rude, and an unabashedly outspoken Genesis supporter.

By seventh grade, I had transferred to a new, Tim-free school, where I found a group of friends that had all made the same gratification-delaying decision on the Super NES. It was a bit of a sheltered environment, as far as the system wars were concerned, and one where we could easily revel in games like Link to the Past, Street Fighter II Turbo, Star Fox, and Contra III without even thinking about the Genesis games we might be missing.

But a change of scenery didn’t change the flow of history, and by high school the time came to choose what system would succeed the Super NES on our TVs. Even with years of unflagging Nintendo support under my belt, I had to admit that the store displays for PlayStation games like Destruction Derby were a lot more compelling than Altered Beast ever was. Nintendo’s decision to stick with expensive, outdated cartridges for the Nintendo 64 – scaring off crucial SquareSoft support in the process – was worrisome both to me and to the editors of Next Generation magazine, whom I was increasingly coming to trust to inform my important pending console choice. 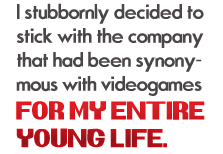 But while my friends all moved on to PlayStation purchases, I stubbornly decided to stick with the company that had been synonymous with videogames for my entire young life. Partly I was convinced I was sticking with a proven performer in videogames. Partly I let Nintendo Power convince me that CD loading times would be a much bigger issue than they ended up being. Partly I was clinging to the promise held in a grainy, postage-stamp-sized preview video of Super Mario 64 downloaded from my family’s AOL account. It all added up to me clinging to my Bar Mitzvah money through an entire year of Nintendo 64 delays, once again sure that my decision would pay off in the end.

And while I could point to Super Mario 64 and Goldeneye 007 with pride in the years to come, the rest of the paltry, early Nintendo 64 library gave me increasingly little ammunition to convince my friends that sticking with Nintendo had been the right choice. Thus I became the guy at the lunch table laughably arguing that my access to Killer Instinct Gold somehow made up for missing out on the Tekken series, or that Earthworm Jim 3D was worth looking forward to just as much as the next Final Fantasy, Gran Turismo, Crash Bandicoot, and Resident Evil combined. And this time it wasn’t just Tim’s grating voice pushing against the wisdom of my arguments, but a whole group of light-hearted, well-meaning, and frustratingly, obviously correct friends.

I’d like to say it was a dawning maturity that made me realize the foolishness of holding blind allegiance to Nintendo’s lost cause, but really it was the extra income from my first summer job that gave me the freedom to acknowledge my error and buy a PlayStation. Even then, it was hard to admit that I had been wrong; that the company that had introduced me to videogames had let me down; that I had wasted so much money and gaming time on what was, for the most part, a dead end on the constantly branching path of the system wars.

Today, when my colleagues see console fanboys arguing fruitlessly in comment threads, they see a group of illogically territorial misanthropes more concerned with winning an argument than enjoying games. But that’s not what I see. When I see a fanboy, I see someone eager to relive the joy of their first exposure to videogames by sticking with the company that brought it to them. I see someone who’s invested an important part of their identity into what a videogame company has come to represent to them. I see someone trying with all their might to convince themselves that they’re not missing out on anything over the rich kids whose parents can buy them all three major consoles and dozens of games every year.

When I see a fanboy, I see the person I was – someone trying to recapture a simpler time, when videogames meant only one thing and also meant everything.

Kyle Orland is a freelance journalist with over ten years of experience writing about games and the issues surrounding them. He’ll still argue to the death that Super Mario 64 is the greatest game of all time.