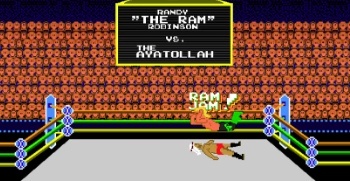 The fictional Nintendo game featured in Darren Aronofsky’s The Wrestler isn’t just a clever metaphor, but a fully functional title.

Darren Aronofsky’s The Wrestler contains more than its fair share of scenes that are difficult to watch, due to the out pouring of shame, physical torment and constant struggle put it on display by a talented actor, Mickey Rourke. The story of Randy “The Ram” Robinson was one of the most discussed films of this past Oscar season, and while the audience endures watching Rourke be planted onto thumbtacks, cut with barbwire and even go as far as to nearly decapitate himself, no scene is more painful than watching Randy cling desperately to his past by means of his own Nintendo videogame.

Kotaku’s Michael McWhertor spoke to the creators of Wrestle Jam 88, the brother and sister team of motion graphics artist Kristyn Hume and programmer Randall Furino. The duo created the game specifically for The Wrestler, drawing clear inspiration from vintage Nintendo games like WWF Wrestlemania and Nintendo’s own Pro Wrestling.

“[Wrestle Jam is] completely playable. There was an intro screen, character select, win / loss conditions, opponent AI, eight different attacks,” says Furino. According to Hume, director Darren Aronofsky wanted a fully functioning demo for the actors to play in the film. “It was as close to a genuine old-school wrestling game as I could make it in the time allowed. I even mapped an old Nintendo controller to the input system so they could play it that way.”

Overall the project took about a month to complete for what amounts to a good minute or so or screen time. A real, struggling actor could do worse, so I’d consider Wrestle Jam 88 a success.