Medal of Honor: Warfighter has been judged and found wanting. While not necessarily bad, the game is simply another brown shooter, a relic of a worn-out genre. During the conversation about Warfighter I became curious about the much-maligned “brown shooter” -where did it start? What was the reason for going brown, and why has it now gone grey? Interestingly, every avenue led me back to the original Medal of Honor from 1999, a game so innovative that, if my theory is correct, it defined the genre’s visual design over a decade ago.

Medal of Honor was the brainchild of director/producer Steven Spielberg, who saw it as a way to introduce kids to WWII history. Back then, first person shooters were largely sci-fi fare, like Marathon or tactical shooters like Rainbow Six, and there was some skepticism at DreamWorks Interactive about whether a historical setting and retro weapon options would appeal to a modern audience. Spielberg remained adamant despite the advice of his team, and charged ahead with the game, cross-pollinating it with elements from his film Saving Private Ryan, which was then in post-production. Spielberg brought weapon experts on board to oversee the realism of the firearms, recorded live sound effects at a shooting range, and even retained military consultant Dale Dye – also part of the Saving Private Ryan team – to advise DreamWorks on tactical and historical accuracy. These steps were major innovations at the time, more familiar to Hollywood than the game industry, and the eventual success of Medal of Honor directly contributed to the military consultants we see in the industry today. However, the most crucial and long-lasting impact of Medal of Honor was that Spielberg borrowed the visual language of Private Ryan to inform the aesthetics of his new game, an influence that proved so pervasive that it permeated the entire genre.

Critics and veterans often praise Private Ryan for its accurate depiction of combat, but Private Ryan wasn’t just a movie about the “reality” of WWII, it was also a reaction to the glamorized myth Hollywood had built around the War. This is especially clear during the Normandy scene, where the images of maimed American soldiers serve as a dual indictment of the horrors of warfare and the glossy film culture that glorifies it. The Americans in this scene aren’t tough, gravely heroes like John Wayne, they’re nineteen and twenty year-old kids being butchered en masse. What makes them heroic isn’t a steely lack of fear, it’s that despite their terror and anguish, they still push forward with blood on their boots and sand in their mouths. It’s a masterful piece of filmmaking that simultaneously manages to be anti-war and pro-soldier. To shore up this “realistic” take on cinematic combat, Spielberg and cinematographer Janusz Kamiński decided the movie should look like color footage from the 1940s rather than the Technicolor epics of old Hollywood. To accomplish this they slowed the shutter timing to half its normal speed, stripped the protective coating off the camera lenses, and ran the film through a bleach bypass, desaturating the colors and making the images slightly fuzzy. In addition, Spielberg shot most of the action using shaky, handheld cameras and then edited the footage into quick cuts. The result looked like something between a feature film and period documentary footage, with the imperfect nature of the film reinforcing to the audience that they were watching real events that happened to real people. Private Ryan‘s formula proved so successful, in fact, that drab colors, quick cuts, and shaky pans became cinematic shorthand for scenes of combat being “authentic,” and movies as diverse as Black Hawk Down, Enemy at the Gates, Windtalkers, and even the South Korean Tae Guk Gi: The Brotherhood of War, cashed in on the aesthetic. Spielberg himself doubled down on the process when he used similar techniques for the 2001 miniseries Band of Brothers, which even featured a credits sequence on scratched-up film. Essentially, when Spielberg attacked the Hollywood myth of glamorous combat, he accidentally replaced it with the myth that dull colors and dirtiness was a signifier of reality.

But Medal of Honor had the benefit of being part of the Spielberg circle, and jumped on Private Ryan‘s sepia bandwagon before it was even a bandwagon. Spielberg almost certainly ordered this himself, likely because it tied Medal of Honor into the larger DreamWorks brand. In addition to the desaturated colors, it also included the film’s memorable tracer rounds, as well as the hallmark zipping sound bullets made when they slashed by the camera. There were differences too – DreamWorks removed all gore in response to the Columbine killings, for instance, and the game’s story focused more on espionage and sabotage a la Where Eagles Dare (Spielberg’s favorite WWII film) than the front line soldiering of Private Ryan. One notable mission even tasked the player with going undercover as a Nazi officer, using a set of forged papers to pass checkpoints, then executing the surprised guards with a silenced pistol. The game was also laced with miniature historical documentaries that filled the player in on period topics like the OSS, German railroad artillery, and V-2 rockets, making it somewhat of an educational experience. This mix made Medal of Honor a hit both critically and commercially; it sold more than 2.5 million copies and made WWII a landmark setting for shooters. 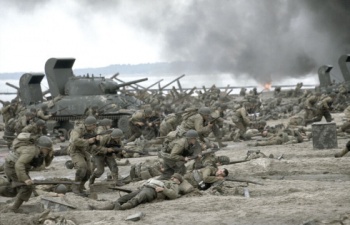 Though Spielberg sold DreamWorks Interactive to EA shortly after Medal of Honor‘s release, the series continued its homage to Private Ryan in each subsequent game. Despite the name change to EA Los Angeles, DreamWorks DNA was still in the studio’s blood, and the first game developed under the EA name, Medal of Honor: Frontline, was essentially a mishmash adaptation of Saving Private Ryan and Band of Brothers, with a side dish of A Bridge Too Far on the side. When twenty-two members of the Medal of Honor: Allied Assault team left to found Infinity Ward, their brash new Medal of Honor competitor, Call of Duty, took inspiration from what had by then become the standard visual language of World War II films and games: dirt brown, concrete grey, and olive drab all the way to the horizon. Infinity Ward even upped the ante by swiping more elements from Ryan, like the shell shock and tinnitus effects that occur whenever the player survives an explosion. The aesthetic became so pervasive that even franchise installments that dealt with the Pacific War, like Medal of Honor: Rising Sun and Call of Duty: World at War contained fairly anemic greens and blues, which is strange for games set largely on tropical islands. Of the major WWII shooters, it seems only the Battlefield games were willing to add a bit of vibrancy to their Pacific maps.

Then, when shooters went modern and “realism” became the watchword, Spielberg’s Frankenstein aesthetic marched on, though not because it looked good or made sense – after all, why would you make a game set in the modern day that looks like antique film? – but because the style had evolved into a signifier of authenticity. Spielberg’s attempt to break down the Technicolor war myths of old Hollywood has become the new Hollywood myth, one that confuses ugliness with veracity, and suggests that anything drab and gritty must therefore be true. Unfortunately, the overuse of this visual style doesn’t make games look true, it makes them look boring.

The tragedy of the grey-brown palate is that it doesn’t reflect reality. Speaking as someone who grew up in Hawaii and has hiked World War II battlefields around the Pacific, I can tell you for a fact that Saipan isn’t a dim jungle under a faded denim sky. Pearl Harbor doesn’t have grey water capped with red-shot clouds. The men who hit the beaches at Normandy and Guadalcanal didn’t see the battle through an antique camera lens, they saw the horror and, yes, sometimes the beauty too, through eyes as sharp and color-sensitive as ours. The antique film aesthetic is fundamentally incompatible with games as a medium for one simple reason: In a movie we’re watching history, but in games we’re there. Private Ryan‘s motif assumes that the audience is an observer, but in games, we’re a participant.

There are a few things that can be done about this: The first is to recognize that the idea is tired, outmoded, and not particularly necessary. The second is to realize that World War II was literally that – a World War, with interesting and heroic actions taking place all over the globe. Games have largely neglected The Pacific War, for example, and many of the major actions have gone almost completely unexplored. Saipan has never appeared in a game, and neither has the Burma Campaign or any theater of the Sino-Japanese War. All of these settings would force us outside the geographic box of Fortress Europe and let us see new and colorful things: rainforests, lantern-lit Chinese streets, and the tennis courts and bungalows of the British Raj. We could even (gasp!) play as non-white soldiers: the Chinese National Army, the Indian Assam Rifles, and the famous Nepalese Gurkhas with their vicious curve-bladed kukris. The Pacific offers a new, vibrant setting, fresh weapons, and new protagonists ready for action.

Another option is to draw from a greater mix of films. As a contrast to Saving Private Ryan, we might consider Terrence Malick’s The Thin Red Line. While the plot is a bit of a mess, Malick went the opposite direction from Spielberg, emphasizing the sumptuous colors and natural beauty of Guadalcanal (though the film was actually shot in Australia). Malick’s focus on the tropical scenery communicates the possibility of life growing out of human chaos, but it also reflects how out of place the soldiers look in their dull uniforms, trapped between neon green grass and the endless aquamarine of the sea. The wondrous plants and mountains eventually become ominous to these men, an alien landscape where they don’t belong.

We could also simply reject the so-called “grittiness.” Brothers in Arms: Hell’s Highway managed to depict Operation Market Garden with a bright clarity that was extremely welcome, and of the modern shooters, Rainbow Six: Vegas and its sequel used the city’s fluorescent garishness to great effect.

We, as gamers, owe Steven Spielberg a debt of gratitude for blazing the trail with innovative visuals, sound, and mechanics in Medal of Honor. That we are still stuck in the rut he created is, in many ways, a testament to the depth of his footprint. However, enough is enough. Steven created that footprint by innovating, and it’s time we did the same.