From 1977 till today, nerd movies – i.e., films of onetime ghettoized genres such as horror, science fiction and fantasy – have dominated the blockbuster movie business. What used to be disreputable B-movies were now multimillion dollar hits, and just as nerd movies changed Hollywood, Hollywood changed nerd movies.

This list was exponentially harder to assemble than Part I precisely for that reason: There’s just so much more to put on here. In other words, don’t feel too bad if any of your personal favorites are missing – plenty of mine are, too.

What else can be said? Star Wars changed everything, and serves as the splitting point between the early and modern eras of the nerd movie. More than any other film since the beginning of the medium, it’s influenced not only movie culture but human culture to an unprecedented degree. I don’t truly think you can understand the modern world without first understanding (please note that I didn’t say liking) Star Wars.

Also, it should go without saying, the Original Trilogy, pre-Special Edition versions are the ones to see.

After inventing the zombie genre, here George A. Romero perfected it. Human survivors hunker down in a mall to fend off the walking dead, and the greatest zombie movie ever made ensues.

A knife-wielding escaped mental patient is somewhere outside the house. A teenaged babysitter is inside. The hero psychiatrist might not get there in time. John Carpenter crafts the most important non-supernatural horror film after Psycho, and the American slasher is born.

Before this, no one had any idea what a big-budget superhero movie should be. Previous attempts had fallen on the side of comedy or simplification. Richard Donner opted to go big: Tell the origin and adventures of The Man of Steel straight faced and an epic in scope. In doing so, he made the first great superhero movie, and one that wouldn’t be surpassed until Spider-Man 2 almost 30 years later.

Ridley Scott’s Alien deftly brought “old dark house” horror into the space age, James Cameron’s Aliens turned “what if it fought the Marines?” into one of the go-to sequel formulas, and H.R. Giger’s “Xenomorph” became the new template of sci-fi monsters. Creature features haven’t been the same since.

Good? Not exactly. Influential? You bet. Producer Dino de Laurentis aimed to bring the classic comic strip and movie serial sci-fi hero to the Star Wars age, but the result was a baroque space-age costume epic set to a series of hard-driving Queen rock anthems. Nonetheless, its earnest zeal and the legend-making performance by Brian Blessed has made it a retro-cool classic and a geek benchmark – expect to hear it referenced a lot in the reviews for Thor.

An American Werewolf in London (1981)

Another 80s horror/comedy mashup, but this one features cinema’s greatest practical werewolf transformation ever. Anything else might be a spoiler.

If I would, I’d put every John Carpenter movie on this list. Dispatched to rescue the president from the anarchic penal colony that used to be New York City, Kurt Russell’s Snake Plissken proved for good or ill that there was no such thing as too over-the-top for modern action heroes. 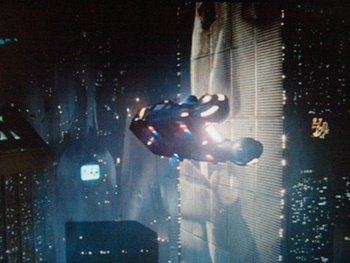 In 1981, up and coming director Sam Raimi got his friends together to make a low-budget shocker about a cabin in the woods terrorized by demons unleashed by an evil book. The result made Raimi into a geek god and Bruce Campbell’s Ash into the horror genre’s most iconic human hero, returning for Evil Dead 2 and Army of Darkness.

And here’s what we came here to fix. Based on Philip K. Dick’s “Do Androids Dream of Electric Sheep,” this is about a rogue group of artificial humans. Harrison Ford is a “Blade Runner” – a detective specialized in discerning renegade Replicants (artificial humans built for labor) from “real” people. When he encounters one so lifelike it even fools itself, he questions his morality and reality. Along with being a terrific thriller, this is also the movie that set down what an “urban future” would look like for the next few decades. (pictured)

Less an adaptation of Robert E. Howard’s “Conan” stories than of the Frank Frazetta paintings that posthumously popularized them, this made Schwarzenegger a star and remains among the best adaptations of high fantasy ever. The effects? Dated. The acting? Iffy. But the note-perfect mythic dialogue and soaring direction by John Milius? Legendary. And the famous score by Basil Pouledoris? One of the finest ever.

The first wave of modern nerd movies can be handily summarized as “B-movies made into A-movies,” and here’s the ultimate example: The characters and story style of pre-WWII pulp adventures infused with real money, real talent and real smarts. Everyone making action films since has basically been trying to make Raiders of The Lost Ark again.

The other films are for Trek completists only, for the most part. But the second, third and fourth comprise an interconnected trilogy that still represents the high water-mark of what a Trek movie can be. Wrath of Khan and Search For Spock blend the big idea adventure of the original series with top-tier filmmaking, while The Voyage Home makes Gene Roddenberry’s ideal of future progress as explicit as it’s ever been – sending The Enterprise crew to “barbaric” 20th Century America to stop an “unimportant” environmental catastrophe from causing Armageddon in their future. Watch these, then get back to me about how wonderful J.J. Abrams’ dumbed-down Top Gun version was.

Using a mix of old and new effects techniques and a big hunk of Walt Disney’s money, Steve Lisberger brought virtual reality to the screen a decade before the word even existed, fusing New Age philosophy, computer science theory and videogame culture into a one-of-a-kind creation that still seems ahead of its time today.

Someone thought Frank Herbert’s impenetrable sci-fi magnum opus of spice, giant worms and alien political dynasties could be the next Star Wars. Someone else thought it would be a good idea to hire ultra-offbeat cult film icon David Lynch to direct it. A whole bunch of somebodies lost a fortune, but thanks to them we have one of the strangest big-budget genre films ever. It’s the Leaning Tower of Pisa of movies: We know it’s broken, but we can’t stop looking at it. 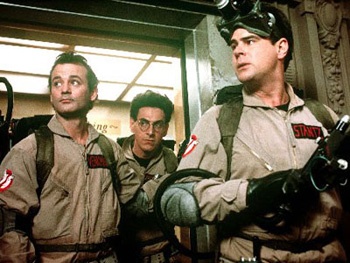 Originally dreamed up by comedian and real-life paranormal expert Dan Ackroyd, this story of unemployed parapsychologists turned high-tech exorcists who end up battling an apocalyptic demon in present day New York is up there with Douglas Adams in the “how-to-do-this” pantheon of genre comedy. Like Back to The Future, the genius is leaving the comedy to the characters while playing the supernatural events almost 100% seriously.

The infusion of nerd culture into the mainstream’s lasting impact was turning sci-fi/fantasy tropes into plot devices for otherwise ordinary human drama. Back to the Future is a story of middle-class wish fulfillment in which a time machine allows a troubled teen to meet his parents at his age in the mid-1950s, understand them better and also alter history to give his family a better life. The second and third sequels take a risk by getting way into the mechanics of time-travel paradox, but it paid off.

Bored kids in Oregon find a pirate’s treasure map in their attic, leading them to a trap-strewn underground labyrinth and a chance to save their economically-endangered homes. Everything you need to understand the psychology of male geeks in their late 20s/early 30s (or young boys of any age) can be gleaned from this movie.

Young Tom Cruise helps elves and pixies rescue a princess and a unicorn from Tim Curry’s magnificiently-horned devil king. Ridley Scott’s fairy tale looks like the cover of a fanciful fifth grade girl’s Trapper-Keeper and plays out like a short story that might be scribbled inside, but it’s kind of mesmerizing and still the best live-action example of that particular style of candy-colored fantasy art design style.

Asian action-fantasy’s U.S. invasion was presaged by this classic from John Carpenter. A thick-headed trucker (Kurt Russell) gets caught in the war between two ancient sorcerers in Chinatown, climaxing in one of the greatest gun/magic/monster/kung-fu battles of all time. It’s been homaged and copied by videogames, comics and other films – but its lasting impact was in subverting Hollywood racial archetypes – Russell’s Chinese sidekick (Dennis Dun) is the real hero, with his boisterous Caucasian buddy merely along for the ride.

One of the scandalously few geek classics that approaches the “fear of growing up” fantasy/allegory subgenre from the female side. After accidentally wishing away her baby brother, Jennifer Connelly must navigate a monster-infested maze to save him from goblin king Jareth – aka David Bowie. Everything from the recurrent themes of maternal obligation to the implicit sexualization of the heroine/villain dynamic is wholly unique in the genre, and it’s both amazing and depressing that there hasn’t really been a film since to so well explore what it is to be both a nerd and a young woman.

Tim Burton’s inaugural Batman movie looks messier and more dated every day, but for better or worse it set the tone for the subsequent decade of superhero movies and directly led to Paul Dini and Bruce Timm’s DC Animated Universe, so credit where credit is due.

Once again, this is not meant to be comprehensive or all-encompassing. Trust me, there are plenty of films I had to cut from here that I would leave if the space would allow it. But I think it’s a solid sampler, and if you think there’s anything I missed, please feel free to enlighten everyone in the comments.