The story behind Devil’s Tuning Fork, an indie game developed by a small team of students at DePaul University, is perfunctory yet engaging: An unknown illness is causing children to fall into sudden, strange comas that the medical community appears helpless to stop. Yet one afflicted child – that would be you – awakens from his unnatural slumber in an alternate reality in which sight and sound have become one and the same. By solving the game’s puzzles and escaping each of its levels, the player is able to save the other children and eventually himself.

Inspired by the system of echolocation used by dolphins and the famous optical illusion created by M.C. Escher, Devil’s Tuning Fork was developed over the course of six months as an entry in the 2010 Independent Games Festival. Industry veterans Patrick Curry, Bill Muehl, Joe Linhoff, Scott Roberts and Alex Seropian, the founder of Bungie Studios and executive producer of Halo, served as advisers on the project and since its release late last year, the game has attracted some rather serious attention from the mainstream gaming media.

The hook is the vaguely Daredevil-like sonar system the game uses to provide “sight” in a setting that is almost impenetrably black. Players can emit two types of sound waves that bounce off the surrounding environs and paint a fleeting picture of the world: High frequency waves that travel long distances and provide fine detail, and low frequencies that are strictly short range but can penetrate objects, revealing weakened floor tiles that will collapse when the players steps on them. Concentrated bursts of sound can also be fired in order to ring bells and gongs that activate platforms and open doors.

The puzzles and platform action are admittedly simple; an occasional jump or dodge is required, but it’s nothing that can’t be easily handled by anyone with the manual dexterity required to boot Windows. As a conventional game, it would probably be over in less than five minutes, but the faux audio twist adds an engaging and unique challenge. Even so, it’s not a big game by any stretch. It’ll eat up a half-hour of your busy day, maybe a little more if you like to poke around a bit or a little less if, unlike me, you avoid getting hung up on an ill-defined puzzle. It’s short, but it turns out to be an ideal length; as a one-trick pony, Devil’s Tuning Fork has the potential to wear out its welcome fairly quickly but avoids that trap by not trying to squeeze too much mileage out of the gimmick.

As you would expect from a student IGF entry, it’s a little rough around the edges. Exploration options are limited because each level is completely linear and the lack of feedback can make some of the sound reflection puzzles very frustrating. The flowing lines on solid objects can be incredibly disorienting. Yet in some ways, the game is also remarkably sophisticated: The music is sparse and haunting, and the anguished, angry voices that echo around the player when certain objects are approached can be downright disturbing. What it lacks in depth and variety, it certainly possesses in atmosphere. 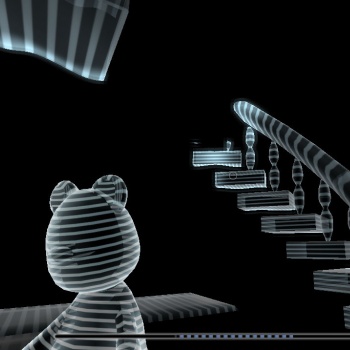 Still, there’s no question that it ends up feeling more like a tech demo or proof of concept than an actual game. This isn’t necessarily a bad thing; the hit Valve release, Portal, evolved from similarly modest roots, after all. But after all the hype, it’s fair warning to anyone going into Devil’s Tuning Fork expecting it to revolutionize their world. It’s not going to.

You should try it anyway. It’s something different, which in a medium packed with cookie-cutter shooters and sports games is enough of a reason to give it a go. For those of you looking to impress the ladies, it’s also a good way to dip your toes in the dreaded “art game” genre with something that’s actually accessible. Even if you don’t finish it (although given the length of the thing, there’s really no excuse not to), it’s worthwhile making your way through the first tutorial level just to see the primary game mechanic in action.

It’s rare that a game really brings something new to an established genre. One such effort in the first-person genre was Thief: The Dark Project, a critical darling that turned established conventions inside-out by suggesting, and sometimes insisting, that gamers kill absolutely nobody while playing the game. Perhaps because of that unusual approach, it failed to really catch fire and since then, innovation within the genre has been slight, to put it generously. In fact, the first truly original game to rise up from the first-person morass in recent years is the previously mentioned Portal, which began life as a senior project by students of the DigiPen Institute of Technology called Narbacular Drop.

I’m beginning to see it as akin to college sports in the U.S.: Just like big league teams compete to sign star players from elite schools, so too could mainstream game developers begin keeping a closer eye on students at the college level, looking for gems like Narbacular Drop or Devil’s Tuning Fork and the people with the creativity and skills to bring them to life. In many ways, game-focused college courses are already a sort of farm system for major developers and it’s not too unreasonable to think that at some point in the near future, the IGF could become a sort of major-league draft for big developers and publishers.

For gamers, such a system also represents a chance to “vote with your wallet” without having to actually involve your wallet or anything that might be inside of it. Want to see Devil’s Tuning Fork get a shot at the bigs? Download it, try it, offer feedback and spread the word. Not every game in the world is going to be turned into a major hit, but supporting those that really deserve it can help make good things happen. Devil’s Tuning Fork is one of those games. Grab a copy at devilstuningfork.com and see for yourself.