The success of the 2007 RPG, The Witcher, put CD Projekt Red in an interesting situation. In the space of a single game, it grew from an anonymous European developer into a Respected RPG Studio, with all of the expectations that moniker entails: specifically, broadening the audience for the follow-up without alienating the core of fans who made the original such a hit.

It’s a trickier balancing act than you might think. RPG fans are the most volatile, hard-to-please gamers on the face of the planet, while the hardcore end of the genre’s scale, where The Witcher chews its bubblegum, sometimes seems intentionally designed to drive away mainstream gamers. So with The Witcher 2: Assassins of Kings finally made official, the obvious question is: how do you make and keep everyone happy?

“We’ve approached the changes and improvements in two ways,” CD Projekt Red Senior Producer Tomasz Gop said. “First, we need to give people who just want to experience the story something that they can play. We did that; the combat can be really simple for those who prefer it that way. On the other hand, there are new options, as we’ve dropped the time-based sequences and moved toward letting players make their own style of fighting – sword strikes, combos, magic, using items, a defensive approach, in any order they wish.”

The “time-based sequences” refers to The Witcher’s unusual combat mechanics, which relied on carefully-timed mouse-clicks to build complex, deadly sword combos. It was a real change from the more action-oriented approach taken by most games and it didn’t really catch fire with a lot of players. While it’s been dropped from the sequel, what’s taken its place sounds equally complex and much more visceral.

“Not only does combat offer more variety right now, it’s also more connected with the world of The Witcher and with character development,” Gop said. “If you know how to kill one monster, you’re okay. But if you want to get really good, you will need to make use of Geralt’s expert monster knowledge to, for example, find out more about the ecosystem, nests, hierarchy of the creatures living around some area. Then you could use this knowledge (together with some handy tools, alchemy etc.), to exterminate more than just a single monster, using more sophisticated methods. It would, of course, reward you with better loot, more respect from the communities and such.”

“The Witcher is a master swordsman, a mutant, so it was pretty important for us to make him move and look like he could really do things faster and stronger than any man,” he continued. “If you are looking for tactics, you definitely will want to check out the variety of strikes, combos and ways to combine it with magic. But if you’re all about fast and painless fights, you might as well just mash your buttons – I mean, there are people who play RPGs and don’t really care about combat because the story is what keeps them in. We implemented a dual approach to combat in The Witcher 2 – if you’re not into it, just chose the easy difficulty level and there you go. For others, there will be so much underneath.” 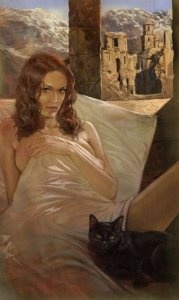 The process of brewing potions, an essential part of any high-level monster hunting, is also being simplified for those who just want to get on with the action, while players who like to experiment will still be able to do so. “We’ve made alchemy be a mini-game. You can manually influence the process of brewing a potion in order to get something unique,” he explained. “But then, again, you don’t have to – the default alchemy is much simpler than in The Witcher.”

The Witcher 2 will take place a few months after the conclusion of the first game, with an opening based on the “immediate consequences” of the events that took place during the big finish. The new game is being written by the same team that handled the original and will probably be a bit shorter, which shouldn’t be too much of a problem, since The Witcher clocked in at an estimated 80 hours. “We wanted to reduce the parts of the game where you’d run multiple times between multiple places and it took lots of time,” Gop said. “In terms of quest count it should be pretty much the same. And in terms of story branching and endings, I’m sure there will be even more than in The Witcher.”

Know what else there’ll be more of in The Witcher 2? Women. Unlike certain other highly-trained, magically-enhanced, monster hunting RPG characters, Geralt has no trouble with the ladies and he likes to get around. Gop said the Rivian freak machine will keep on rolling but added that the sex won’t seem quite so perfunctory this time around or, well, juvenile.

“‘Mature’ not only means naked – it’s also about the story. We have redesigned the way we present sex in the game, so that it’s more bound to the storyline and the player feels like each woman Geralt gets close to actually has her own story. Finding out what that story is isn’t just intended to get you in bed with her – it’s actually fun and intriguing to play,” he said. Referring to the notoriously chaste American market (the North American release of the first game was edited to cover up unclothed images of Geralt’s many conquests), he added, “We’ll do all we can to make it onto U.S. shelves uncut, except for losing consistency with the world of The Witcher – that would in no way be forgotten by our fans.”

And how about those boob cards? “No more collectible cards,” he said. “A cinematic approach is where we’re headed this time.”

A pity, but we can’t have everything, I suppose. The Witcher 2: Assassins of Kings is expected to come out in early 2011.

In his mind, Andy Chalk is already waiting in line to buy this game. In Europe.