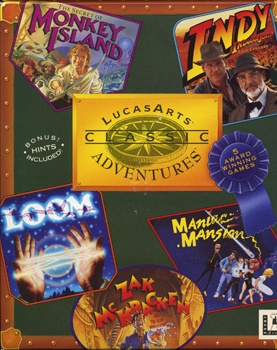 You guys remember LucasArts? Developer and publisher of some repute, considered something of a heavyweight back in the days before the landscape was ruled by the hulking behemoths of sequels and franchises? Maybe it was before your time. Maybe you know the name, but not the face; maybe you think LucasArts is the company that published all those Star Wars games.

That’s a funny thing, actually. When LucasArts first got rolling, all the way back in 1984, it did so with games like Rescue on Fractalus, The Eidolon and Koronis Rift. It may seem surprising now, but it took a lot of years before it finally got around to plundering the Lucas vaults for material, and when it did, it wasn’t Star Wars the company went with but Indiana Jones, cranking out a couple of licensed titles that despite the pedigree met with only tepid response. What really put the company on the map were adventures and epic battles of an entirely different kind.

Two naval simulators released in the mid-80s, Strike Fleet and PHM Pegasus, got the ball rolling, but it was a World War Two air combat simulator called Battlehawks 1942, released in 1988, that really lit a fire under gamers. The following year came Their Finest Hour: The Battle of Britain, and then in 1991, Secret Weapons of the Luftwaffe wrapped things up on a high note with the most ambitious and successful entry in the trilogy.

The games were highly regarded for their attention to detail, and drew widespread praise not only as top-notch games but also for having considerable educational value. The hefty, ring-bound manuals included with the games were packed with information about the war, including strategy and tactics, quotes from historical figures on both sides, photographs, interviews and more. It was literally impossible to play the game without learning something about the war, and the encyclopedic yet engaging instructions made it far more likely you’d learn quite a bit.

But LucasArts really hit the ball out of the park with a series of adventure games you may have heard about, beginning with Maniac Mansion and progressing over the years into famed titles like Loom, Zak McKracken and the Alien Mindbenders, Sam & Max Hit the Road and of course, the great and famous Monkey Island series. For a few years in the early 90s, the name LucasArts was virtually synonymous with adventures; Sierra may be the company most widely recognized for popularizing the genre, but on the other hand, nobody at Old Man Murray ever wished cancer on Ron Gilbert.

When LucasArts did finally make use of its most famous property, the results were undeniably impressive. 1993’s Star Wars: X-Wing, headed by Larry Holland – the guy responsible for the earlier World War Two sims, was riveting, and Star Wars: TIE Fighter, released a year later, upped the ante both technologically and narratively, through the development of a very plausible and well-told story that put a whole new spin on the “evil” Galactic Empire. Star Wars: Rebel Assault, released for the Sega CD and 3DO as well as MS-DOS was less impressive as a game but earned acclaim as a remarkable technical achievement that took full advantage of the CD-ROM technology of that era, including movie footage, digitized voices and pre-rendered 3-D backgrounds. 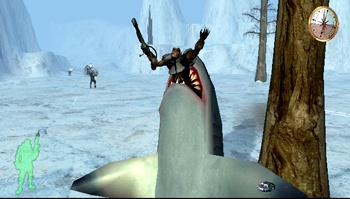 But success carries its own risks, and while notable releases like The Dig and Full Throttle were still to come, for LucasArts the die had been cast. Beginning in the mid-90s, the company expanded into a wide range of genres while somehow managing to keep it all Star Wars, all the time. Don’t believe me? A foray into the FPS scene was made by way of Dark Forces, later to become the Jedi Knight series, while strategy fans got Star Wars: Rebellion, and then the more popular Galactic Battlegrounds.

Yes, Star Wars Monopoly, and yet nobody at LucasArts seemed to think that their licensing efforts had just maybe gotten a little out of hand. Despite a brief burp of releases a few years ago that included the sadly underrated Armed & Dangerous (pictured) and the horribly bastardized Secret Weapons Over Normandy, LucasArts has held fast to the Star Wars franchise for well over a decade, and shows no signs of letting go.

The company’s latest title, Star Wars: The Force Unleashed, is a fine case in point. Despite huge levels of hype and a generally positive response to the “multimedia project” as a whole, the game itself has earned relatively low marks. It currently sits with an average Metacritic score of just over 68 across all platforms; not an abject failure, perhaps, but far from good by any measure. Worse for LucasArts, it’s not just a sub-par game but also a sign that the buying public, who at one point would have lined up for days to buy crap on toast if it was an official Star Wars product, is growing more critical and demanding of solid entertainment in their licensed videogames. That’s bad news indeed for a company that’s grown accustomed to doing little but shamelessly milking a franchise.

So how does a widely respected force in the industry slip to such a pale and largely irrelevant shadow of its former self? Put simply, LucasArts fell prey to a phenomenon familiar to gamers who were lucky enough to spend time with its early flight sims: “Target fixation,” a kind of tunnel vision in which fighter pilots become so focused on what they’re shooting at that they fail to take notice of the ground rushing up at them at 250 miles per hour. It’s easy to fall into, and it can be deadly.

Other companies have stumbled down similar paths (EA Sports, anyone?) but none have embraced the journey quite as willingly as LucasArts. While this is no doubt due in part to its unique access to the Star Wars brand, it should nonetheless serve as a cautionary tale to other developers searching for their own particular Holy Grail. A great licensed property can be a tremendous boon, but it can also lead to aimlessness, bloated over-reliance on formula, creative bankruptcy and ultimately, an ignominious downfall. LucasArts shows absolutely no sign of making a significant shift away from George’s most famous franchise, and by all appearances the company will live and, eventually, die on the Star Wars name and whatever it can wring out of it. It’s a sad fate for a company that two decades earlier was one of the industry’s brightest lights – but man, you shoulda seen ’em back in the day.

Andy Chalk has nothing against Star Wars, really, although he thinks all this “Episode IV” nonsense is kind of silly.