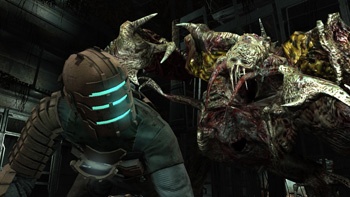 On September 26th of last year, I was on my way home from work at two in the morning when I got a call from my wife, who wanted to know how far away I was.

“Because I think someone’s trying to get into the house.”

If I could freeze-dry any single moment in my life, package it, and freely license it to any game developer who’s even remotely interested in making a scary game, it would be this one. The problem that I have with most horror games – including EA’s recently released Dead Space – is that they fail to convey the most essential element of fear, which, for me, means an overwhelming feeling of helplessness in the face of terror that has come to where I live. In other words, the horrible laid atop the mundane, not necessarily in order to indicate that something nasty this way shambles, but that it is, in fact, already here, and the only weapons I’ve got at hand are a tin of Altoids and a somewhat cranky disposition.

A good example of this kind of horror is a movie that scared the sweet crispy rhubarb out of me when I was a kid. The 1958 version of The Blob introduced my five-year-old psyche to the new and terrifying notion that we might not be safe anywhere, not even in our own homes, because if a strawberry-colored bag of ambulatory space pus can squeeze under the door or ooze through the heating vents in order to nosh on your ass, basically it’s all over but the screaming. I figured it was only a matter of time, really, before my folks found my empty pajamas arranged on my bed in a me-shaped, flannel tableau o’ terror, along with a note thanking them for providing such a tasty, though slightly stringy, midnight snack. My childhood demons were nothing if not polite.

Horror games that announce the appearance of every new monster with a dramatic intro sequence scored by repetitive, high-pitched shrieks of Psycho-esque violins can be entertaining, sure, but scary? Not so much. Games that lead me by the septum through level after barrel-filled level of industrial backdrops while occasionally flashing images of whispering ghost children across my field of vision might earn a startle response from time to time, but until you’ve scrubbed a Fruit Punch Gatorade and Boca Burger vomit grenade out of the living room carpet, spare me the whispering ghost children, thanks; the real ones are scary enough. An accurate method of gauging the overall scariness of children – corporeal or spectral – in videogames lies in the answer to a single, simple question: Can they crap on me or not? If not, bring ’em on. 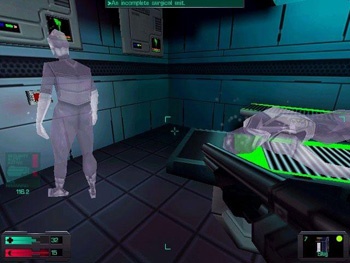 The aforementioned Dead Space, though otherwise enjoyable, failed to register as even a blip on my ACME Fright-o-Tron precisely because of its stark, unfamiliar setting; with interiors inspired by Gothic architecture upholding the utilitarian purpose of a mining ship, it takes place somewhere you’d expect horrible things to happen. By contrast, the game that provided the bulk of Dead Space’s design DNA – System Shock 2 – succeeded in delivering chills largely because of its contextually mundane backdrop and its quiet, persistent threats. While prowling the halls of the Von Braun, you knew without a doubt that something horrible had happened, but you also knew that people had once been happy there, as remnants of the NPCs’ personal lives were pervasive and sometimes quite touching. The fact that most of the game took place in a controlled, clean, and isolated environment only emphasized the carnage.

Similarly, the most convincingly creepy level in Monolith’s Condemned: Criminal Origins was the department store; its use of broken, yet familiar archetypes such as cash registers, escalators, mannequins, and Christmas decorations (some of which, like the Noel candles, I remembered from childhood), coupled with some unsettling ambient sound effects, prompted inevitable internal comparisons between what the store had once been like, to what it had become in the game. The extent to which decay had taken root in a place so formerly prosaic provided an excellent playground for bringing horror into the workaday world, and the result was one of the most memorable and effective settings in any game I’ve played.

After racing home at a breakneck clip that night last September, intent on rendering any would-be intruders into a tasty Chevrolet bisque, I wheeled the car into the backyard towards the area where my wife said she’d heard “something large thumping against the side of the house.” Luckily I found nothing but some lightly tread-upon weeds, because fear and anger had put me in a mood to kill first and ask for leniency later.

I have no doubt that she heard something, but the problem is that I can’t define it, and that is, to me, the essence of horror; the unspeakable, or this case the unknown, come to touch the sacred in a place where we should not only be safe, but where we should know that we’re safe.

While even the best horror games offer nothing more than survival and a return to the normal as their ultimate goal, I was reminded not too long ago that normal is often more than good enough, and sometimes survival is its own reward.

Matt Turano realizes that it’s just a stupid movie, but he still checks the closet before going to sleep.