2012 was the year something fundamentally shifted in the relationship between the military and the media. For nearly a century, the U.S. military has wielded a certain amount of influence over the filmmaking industry through a back door channel, but due to recent scandals, the Pentagon is reevaluating whether dealing with film studios – and the burgeoning game industry – upholds the values it’s trying to protect. Meanwhile, technology is positioning games as a new creative medium that can’t be swayed as easily as Hollywood.

The partnership started early. One of the first war films, the divisive Birth of a Nation, stocked its battle scenes with artillery pieces loaned from West Point to give it the sting of authenticity. The first Academy Award for Best Picture went to 1929’s Wings, a movie about aerial combat during World War I that used Army Air Corps pilots to shoot all its dogfights. This entanglement deepened during World War II, when film stars like Ronald Reagan and Clark Gable enlisted in the army to make recruitment and educational films in motion picture units. Director John Ford shot documentaries and headed the OSS’s photographic division – he filmed the landings at Omaha Beach and was wounded at Midway. Disney stamped out propaganda films, including a mind-twisting animated short that cast Donald Duck as a Nazi munitions worker. Perhaps inevitably, this close relationship between the rifleman and the cameraman gradually evolved into a codified system of mutual benefit. Hollywood gets access to military equipment, locations and personnel, and the Pentagon gets some degree of control over how the U.S. military gets portrayed.

For the filmmaker’s part, it’s a good deal. Reimbursing the military for fuel and personnel is far cheaper than shelling out for digital effects or renting equipment from other militaries, like the Israeli Defense Forces. A Black Hawk helicopter, for instance, only costs filmmakers around $3,600 per hour in fuel and comes complete with crew. As a bonus, the military dispatches active duty advisors to oversee the production for accuracy. Military-media partnership is a tempting prospect in budget-conscious Hollywood, and the results look good onscreen. You, as a viewer, have been a beneficiary of this relationship in everything from Black Hawk Down to Iron Man to NCIS, and most recently in Battleship.

The Pentagon, for its part, gets the chance to shape its own image in the minds of the public. Across the military, there is a widespread belief that positive media images correlate with higher recruitment and retention rates – basically, that if the armed services get portrayed in the popular culture as strong, professional and heroic, more Americans will join the military or feel like their tax dollars are well-spent. The theory itself is sound, and has some anecdotal evidence to back it up. Interest in Naval aviation surged so much after the premiere of Top Gun that the Navy set up recruiting booths in theaters. Search Twitter for reactions to action movies about war and you’ll inevitably see young men saying that Battle: Los Angeles made them want to join the Marines. As a child, I myself became interested in the military through Tom Clancy films like The Hunt for Red October and Clear and Present Danger, both of which received military support. Of course, to have this effect, the U.S. Armed Forces have to put their best face forward.

To gain the Pentagon’s support, producers need to submit their scripts to the Department of Defense for review and approval according to a strict set of guidelines. Films that show U.S. soldiers doing drugs, even in Vietnam, generally get canned. Any movie dealing with the moral grey areas of warfare doesn’t make the cut. Maverick characters that defy military order are a common point of contention, since they run counter to the military ethos of teamwork. No members of the armed forces can be portrayed as villains. Historical facts like racial segregation and institutional racism in the military get struck out or downplayed. And if the film features aliens, then the military has to be part of the force that eventually defeats the invaders – they can’t just get smashed up in the first act to make way for the heroes. (This is why all the Transformers movies feature a squad of nondescript soldiers fighting beside the Autobots.) In many cases, the military will suggest script changes, and if they don’t get them, they don’t approve participation in the project, sometimes stalling it permanently. Essentially, representatives from the services get to line-edit scripts in exchange for their cooperation. In some cases, they pre-screen the movie before release. It’s a system that’s little-known outside of the film industry, and one that presents difficult questions about the first amendment, since by this system the military – a government organization – clearly privileges one type of speech over another.

However, over the past ten years, this back channel between L.A. and Washington has started to fray. While big budget summer flicks have been all too happy to toe the Pentagon’s line, most of the reality-based War on Terror films have mirrored the public’s deepening ambivalence toward America’s foreign wars. Added to that, advancements in digital effects are making it easier and cheaper to create battle scenes without large amounts of equipment or personnel.

Then there are videogames. Arguably, games are actually a better platform for recruitment message than films: They go on longer, first of all, and deliver much deeper content than a two-hour movie. Games also allow players to “be” in fantasy versions of the military and imagine carrying out heroic actions. Games are popular with the young male demographic recruiters target, and a large percentage of games cast characters as part of the military. The problem is that because games are digital space and don’t rely on physical props, costumes, and locations, the Department of Defense has little or no leverage to affect changes. Compounding this, when game developers need to hire technical advisors they go directly to the source by hiring veterans or even active duty service members, bypassing the Pentagon command structure entirely. Ironically, this means that the action games that mimic summer blockbusters actually tell stories most military action films would never get away with. Just in the Modern Warfare series, we see members of the U.S. military die in an atomic blast, gun down civilians in order to maintain their undercover identity, torture targets for information and bring down a rogue American general. Splinter Cell: Conviction has Sam Fisher hunting down conspirators within the U.S. government. Even the infamously pro-military Medal of Honor (2010) includes an ugly portrait of a desk general who accidentally calls air support on his Afghan allies. In other words, even the most jingoistic games criticize the military more than the blockbusters of “liberal” Hollywood. 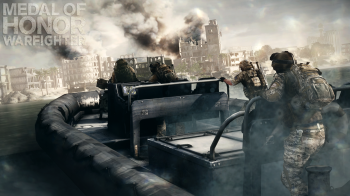 However, this enmeshment of troops, politics and entertainment media soured last year. The catalyst was the publication of No Easy Day, a memoir by former DEVGRU (SEAL Team 6) operator Matt Bissonnette who participated in the 2011 raid that killed Osama bin Laden. As the book climbed the bestseller lists, the DoD threatened Bissonnette with lawsuits and criminal charges for not allowing them to review and edit the text before release. But the fallout from No Easy Day wouldn’t be contained to Bissonnette alone. Suddenly, the DoD realized that in addition to militarizing the media like they’d intended, they’d also made the military go Hollywood.

In 2009, the Navy partnered with a team of filmmakers to shoot footage of SEAL exercises and edit it into an action movie. The result, Act of Valor, was a feature-length recruitment film starring real SEALs that were ordered to participate as actors. But that, of course, is nothing new. The Navy has been commoditizing the SEALs since the 1990s. They lend SEALs to movie projects, film Discovery Channel documentaries about their training regimen and sign off on their name and insignia being used for games like SOCOM: U.S. Navy SEALs. Two days after the Bin Laden raid, Disney filed a trademark to use the term “Seal Team 6” in toys, movies, and vidoegames, and only vacated it when the Navy told them to back off (meaning we’ve lost our chance to see cartoon harbor seals in Kevlar and NVGs). Nobody else in the special forces community receives media exposure like the SEALs do. The Navy took an elite, secretive special operations unit and sent them on a twenty-year publicity shoot. Considering this culture of openness and self-promotion, is it any wonder SEALs are writing books and signing onto games as technical advisors?

The DoD’s response was to batten down the hatches. Not content to go after Bissonnette’s book, the DoD also descended on the seven active-duty SEAL Team 6 members Bissonnette recruited as technical advisors for Medal of Honor: Warfighter. According to reports from an unnamed military source, the seven SEALs didn’t obtain permission to assist Danger Close, and showed the developers items of custom combat equipment unique to SEAL Team 6. All seven had their pay partially forfeited for two months and received a punitive letter of reprimand. While that doesn’t sound unduly harsh, understand that the slang term for these letters is “career killer,” since it permanently bars promotion. This trouble with the government also, no doubt, served as a distraction to Danger Close at a crucial time in the development cycle. In fact, one must wonder whether the constant controversies in the last year of development interrupted the devs enough to contribute to the game’s lack of polish.

In a strange coincidence, the film Zero Dark Thirty, which collaborated with Warfighter on a map pack, got swallowed up in the reevaluation as well. In ZDT‘s case, the popular controversy is whether the CIA obtained the nom de guerre of Bin Laden’s courier via the use of torture as depicted in the film, or whether that was an invention by the filmmakers. Of course, that’s not the reason the Senate Intelligence Committee has launched an investigation of the film. Though the Intelligence Committee has said that the film’s sequence of events contradicts their recent report on torture – a report which has not yet been made public – the real issue is whether the CIA gave Kathryn Bigelow and Mark Boal classified information, or may have misled them about the role of torture in the hunt for Bin Laden. Though the prevailing mood in Washington is that torture isn’t an effective, or moral, means of extracting information, a pro-torture faction still exists within the CIA. If members of that faction spoke to the filmmakers or disclosed documents in an attempt to push their own agenda and sway public opinion, it has serious implications for future dealings between government organizations and the film industry. Basically, in time we may learn that that Bigelow and Boal aren’t pro-torture, but the people feeding them information were. Regardless of the results, the way Zero Dark Thirty‘s filmmakers have found themselves called up before a Congressional committee will likely create a chilling effect. Hollywood wants tanks, planes and inside information – but what they don’t want is to get embroiled in politics.

The controversies of 2012 won’t stop the horse-trading between filmmakers and the military, but it may become less pronounced for a time. Hollywood and the Pentagon will always have a special relationship, but it’s an ultimately troublesome one that games should learn to avoid. Due to the digital spaces of our medium and the ability to hire technical advisors a la carte outside the military structure, games have a unique ability to produce blockbuster-level battle scenes without having to do so under the red pens of Washington.