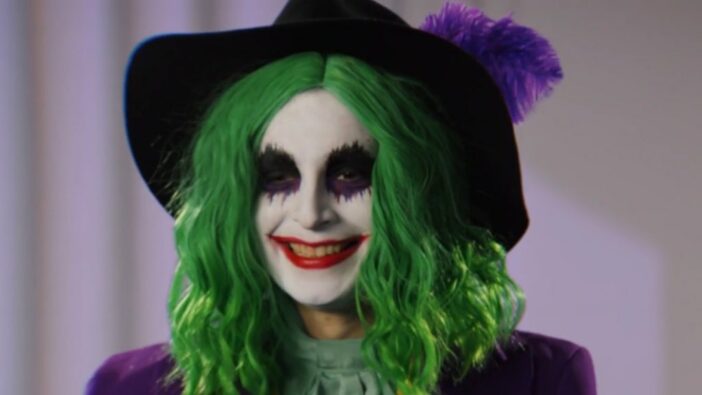 What happens when you make a movie about the Joker, but you have no clearance from any rights holders? Evidently, the film can get all the way to the prestigious Toronto International Film Festival before it runs afoul of Warner Bros.’ legal team. Today director Vera Drew announced that she removed her movie The People’s Joker from TIFF “due to rights issues.” Who could have possibly seen that coming?

The movie is basically a Joker origin story but with a queer bent to it. Drew stars as a down-on-her-luck clown who goes to battle with a fascist caped crusader while struggling with her gender identity. As you can see from the trailer below, there’s a lot of visual resemblances to almost every Joker ever made, stealing from both the film and comic versions of the Joker, and other Batman-associated characters also appear in the film. The film debuted Tuesday during the Midnight Madness section of the festival but will have no further screenings. While there is no confirmation from either side, it’s most likely that Drew was hit with a cease-and-desist letter so hard that it wiped the clown makeup off her face.

Drew posted about the possibility of the removal on Twitter and has spoken about her belief that the film is protected under fair use or “parody law.” However, the film doesn’t actually look to be a parody in the traditional sense, and you’d be hard-pressed to argue that it wasn’t trying to capitalize on an IP owned by someone else, especially considering it explicitly calls itself an “illegal” comic book movie.

Now, we can hash out how ridiculous copyright law is in the US at the moment, but it’s hard to understand how the filmmaker and her lawyers couldn’t see this coming a mile away. Of course WB is going to slap its hand at something like this premiering at one of the world’s most prestigious film festivals. What this does gain the movie is publicity like none other. Considering no one had really heard of it before this, it’s a fantastic marketing move if they do ever get to release it.

The real question is how The People’s Joker even got into TIFF. The movie may have been good enough for selection, but you’d think the festival organizers would have taken one look at the IP rights issues and realized it probably wasn’t the best idea to play host to it.