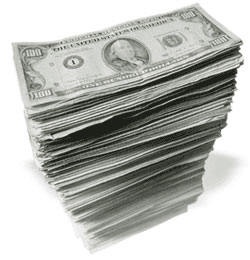 All this talk about which console manufacturer is providing the consumer the greatest value is missing the point. The market has already decided how much a gaming system is worth. The answer? Probably not much more than $250.

Let’s look at current generation console prices to date, in U.S. dollars. Nintendo’s Wii rings up at about $250. Microsoft’s Xbox 360’s three flavors include the $300 Core pack, the $400 Premium edition, and the $480 Elite. Sony’s PlayStation 3 is available in $500 and $600 options. All other things being equal, the Wii’s price is obviously the most attractive, which might explain why it’s outselling the 360 by about 2-to-1, and the PS3 by about 4-to-1.

But all other things are not equal, of course. Not even close. Any gamer with even passing familiarity with all three systems could expound on their individual hardware strengths and weaknesses. And serious enthusiasts debate at length about the relative values of each console, and to what degree the inclusion of such features as out-of-the-box wireless should be taken into account. The prices of optional and less-optional accessories also figure into the discussion, as do the online services offered.

And then there are the games. The quality and marketability of a system’s game library, especially its exclusive titles, is a decisive factor in any console’s success. Here again, there’s plenty of room for speculation about what the future holds for each system. And not surprisingly, gamers are highly attuned to each console’s ability to deliver the types of games they crave.

For the dedicated gamer, there’s a lot to argue, wonder and worry about. For everyone else, though, the issue boils down to one primary concern: price.

It would be foolish to overlook brand strengths, marketing strategies and the like in any analysis of why the Wii is selling more units than both of its higher-end colleagues combined. I’m not suggesting that a novel control scheme and Nintendo’s family-friendly image aren’t helping move Wiis. And the PS3’s current lack of high-profile releases is obviously hurting Sony. But these and similar factors are secondary concerns for the wider market. The bottom line is the average consumer is only going to pay so much for a gaming console, regardless of what it offers. Microsoft’s and Sony’s entries are simply above the price point at which the lion’s share of consumers decide a gaming experience is worthwhile.

Most people, regardless of their age, tax bracket or nationality, enjoy playing games from time to time, electronic or otherwise. Yet for most of the world, for which games are passing diversions, the prospect of paying hundreds of dollars for an electronic game system seems downright silly. Most gamers who venture forth into the non-gaming world are painfully aware of the fact that average consumers don’t view videogames in any form as worthy of copious amounts of time, money and attention. It isn’t critical to them that the PS3 includes a Blu-Ray player, or the 360’s Live service provides a cross-title online community, or that either features high-definition output. They’re not overly concerned about the particular handful of exclusives for each console. And they’re not nearly as discerning in terms of game design or quality.

I’m convinced that both gamers and much of the gaming industry often vastly overestimate the considerations of the average consumer. Round up the electronic gaming experiences that have found wide audiences outside the core gamer demographic, and you’ll notice a conspicuous absence of epic, immersive and original high-budget games. Instead, you’ll find a steady stream of successful casual entries from PopCap and company. You’ll see Nintendo’s Touch! Generations titles and an accompanying army of charming, lightweight imitators. And you’ll discover a deluge of half-baked cursory tie-ins to movie, television and other pop-culture IPs.

The vision espoused by Sony and Microsoft, of an elite gaming lifestyle enabled by high-end, expensive tech, just doesn’t appeal to the rest of the world. So it’s not a matter of how much their consoles are worth. It’s a matter of the degree to which modern society values electronic entertainment. If Nintendo’s successes with the Wii thus far are any indication, $250 is near the upper end of what consumers are willing to pay for such experiences.

In my less optimistic moments I’m tempted to entertain the suspicions of the populace at large, and wonder whether the near-obsessive attention we often give to games is warranted. Maybe an epic, 100-hour RPG isn’t really a valuable use of my time. Does it really matter whether or not my game characters’ faces show every pore or whether they perfectly lip-sych their lines? Is my hand-wringing over weapon balancing in the latest multiplayer shooter justified? And can I truly not live without destructible landscapes and motion blur?

But in the end I must confess these things often do matter to me. There’s no denying my own unbridled enthusiasm for the high-end aspects of this medium. I take comfort in the fact I’m not alone, and that even though the high cost of the PS3 seems thus far to be a major Sony misstep, it’s still selling units. And with luck it will continue to sell. Because as wrongheaded as Sony and Microsoft often appear to be in their pricing and marketing strategies, I want that slice of their vision, the one that caters to gamers such as myself, to take hold of the world at large. I want a world populated by gamers that recognize not just the value of casual, accessible diversions, but the value of visually rich, artfully designed and emotionally compelling experiences.

Earlier this year Xbox platform manager John Rodman made one of those fabulously arrogant remarks we’ve become so accustomed to hearing from Sony and Microsoft execs. “We don’t feel like the Wii customer and the Xbox customer are the same thing,” he told the New York Times. “We think that as soon as the Wii customer turns 14 they want something else.” As snide as Rodman’s remark sounds, there’s a grain of truth in what he says. And maybe even a ray of hope. It’s not hard to imagine that the widespread successes of the Wii and DS will foster a greater appreciation of electronic games in general. And one has to imagine that at some point loyal DS and Wii converts might yearn for more in terms of graphical fidelity, gameplay depth, or online interaction.

Right now, there’s no disputing that Nintendo’s winning the battle for consumers’ hearts, minds and, most importantly, dollars. Will the trend continue, and will it result in an increasingly risk-averse industry, disinclined toward the production of the higher-end titles dedicated gamers seek? Will the lowest common denominator casual and licensed game offerings eventually become the face of the gaming industry? Or will consumers eventually hear the siren song of the higher-priced, higher-end consoles, amplified by growing game libraries and possible console price reductions?

Time will tell, but I’m willing to bet that in the years to come, Nintendo will he heralded as having been gaming’s chief evangelist, and the successes of casual and B-list games as whole will have established the foundation for an entirely new demographic of gamers. One that might even be willing to pay a lot more than $250 for a gaming console.