It’s one of the oldest stories: A beautiful young woman of noble blood is abducted, incapacitated, or otherwise inconvenienced by some form of evil, and a handsome young man must embark on a quest to rescue her. It’s a story that has been with us since the earliest fairy tales, and which we continue to hear told and retold through films, books, and games. A story filled with its own serene magic and a comforting sense of familiarity. Familiarity that has recently bred contempt, prompting an exasperated sigh whenever a princess walks onto the scene.

That’s the trouble with old stories: you’ve probably heard them before. The moment the princess steps in – before her dainty glass slippers even touch the palace carpet – you already know the rest of the plot. You’ve guessed the conflict (the inevitable kidnapping), the climax (a duel with the kidnapper), and the resolution (cake). This alone is almost reason enough to put down the book, controller, or DVD remote and storm off to bake your own cake.

Aside from being intrinsically linked to predictable plots, princesses tend to make unappealing characters in their own right. Princesses are unbelievably passive. They sit around waiting to get kidnapped and, once kidnapped, they sit around waiting to get rescued. They never make an attempt to fight their oppressors or to escape from their prisons. Look at Cinderella, for instance. Cinderella begins as a mindless slave to her abusive relatives and, while any sensible girl would have hoofed it years ago, nothing short of a mystical intervention and a particularly persistent prince will entice Cinderella to seek a better future.

Princesses are also embarrassingly weak. In an age when we are accustomed to seeing sassy and resilient heroines with actual depth, the image of a timid young woman desperately yearning for a knight to whisk her away is so pathetic it’s uncomfortable. There’s a tendency to think this weakness stems from an outdated gender stereotype – that because these stories were written so long ago, they cast women in roles both passive and powerless. You only have to look at the wicked witches and the domineering stepmothers, however, to realize that this is not the case at all. These characters hold plenty of power, and they wield it with a calculating intellect. So princesses aren’t weak because they’re women; they’re weak because they’re princesses.

Why keep them around, then? Well, basically, a princess is an object, a goal, something to be collected and returned in exchange for money and experience points. She’s a plot-driving mechanic; the perfect excuse to send some schmuck out on a journey up Mount Peril. The best example of the perfunctory princess is Sleeping Beauty. Sleeping Beauty is unlikely to be the first thing to spring to mind when you think of princesses, because she’s so dull. You could replace her with a rock and not alter the story. She illustrates everything we can’t stand about princesses by simply doing nothing until the prince turns up to save her.

But let’s talk about videogames. Let’s talk about Peach. Princess Peach is one of the most iconic princesses in gaming; she’s also one of the least interesting. Like Sleeping Beauty, Peach’s only purpose in the story is to provide the hero with an objective. We are told almost nothing about her personality or her relationship with Mario, nor are we given an explanation for her kidnap. In Super Mario 64, Peach appears for two sentences’ worth of exposition and is not seen again until the end of the game. In fact, up until her rescue, there’s no solid evidence she was kidnapped in the first place. For all we know it could be some tremendous hoax and Peach might pop up at any second with a bottle of champagne and a birthday card. 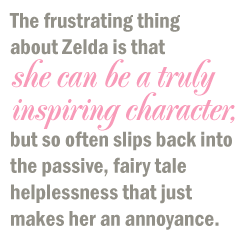 Next to Peach, Zelda’s easily the most recognizable princess in gaming. Zelda makes for a slightly different princess in that she is intrinsically related to the plot, but rarely takes any action to further it. In most of the Zelda titles, Princess Zelda acts as Link’s guide (along with that fairy, the Deku Tree, that other fairy, and that thrice-damned owl), supplying him with pivotal information before sending him into a fish monster’s intestinal tract. Zelda’s abduction typically occurs at a critical point in the narrative, which heightens our sense of urgency about the situation. Still, it’s not always enough. We’re presented with a set of perfectly good reasons why we need Zelda back, but we don’t actually miss her. As the player, nothing is lost to us through Zelda’s disappearance. Contrast this with the point in Twilight Princess where Midna is seriously injured – the thought of losing your constant companion evokes a much greater emotional response than the predictable incarceration of the princess.

The frustrating thing about Zelda is that she can be a truly inspiring character, but so often slips back into the passive, fairy tale helplessness that just makes her an annoyance. In The Wind Waker, she went from a mischievous, hot-tempered commander to a querulous, apologetic princess – losing all of her charm and likeability, and instead becoming weak and uninteresting. Both Wind Waker and Twilight Princess attempt to combat this characteristic weakness by having Zelda take up a bow during the final confrontation with Ganondorf, but this last-ditch attempt to strengthen Zelda’s character fails spectacularly because she couldn’t hit the Gerudo King if he were the size of Jupiter.

Ico takes an interesting stance on the princess story by flipping it around – putting the rescue first, and instead placing focus on the escape. Unfortunately, the princess in question, Yorda, is about as helpless as they come. You literally have to take her by the hand and lead her through the entire game. She treats malevolent shadow beasts from the dark beyond with benign curiosity and responds to attempted abductions with all the ferocity of a bemused kitten. Despite this, Yorda manages to convey a surprising depth of character: It’s impossible to lead someone around a doom fortress for hours on end without forming an opinion about them. Whether you despise her incapability or admire her serenity, you spare more thought for Yorda than you ever would for Peach or Zelda, simply because she’s there. Her inner strength is also revealed towards the resolution, when you are rendered helpless and she becomes the rescuer. In the end, we tolerate Yorda’s fundamental uselessness because it’s an essential aspect of gameplay – although that’s unlikely to be a comforting thought when she’s being sucked into a vortex while you’re dangling from the ceiling half a room away. 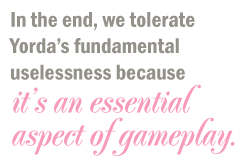 In spite of all this, rescuing the princess is never going to go out of style. There’s something incredibly cathartic about bashing down a castle door and charging in on a stormy steed with your sword drawn and a battle cry on your lips. Princesses give us a reason to do that, and, regardless of how bland and passive they might be, they add a little human connection to our quest. In a world without princesses, every fantasy-based RPG would have you traipsing up Mount Peril in search of a stolen magical crystal. And if there’s one thing worse than princesses, it’s crystals.

Yet an alternative image of Princess Peach gives us a glimpse of how the Princess can evolve. In Super Paper Mario, Peach is not only given dialogue and a personality, but is also included as a playable character. Rather than sitting around in a dark tower waiting to be rescued, she joins up with Mario and Bowser and shares the adventure. Because Peach influences the plot, rather than simply being the plot, she is finally revealed as a dynamic and interesting character. It is one of the precious few instances where a princess has been done well. Peach’s witty exchanges with Bowser are both funny and endearing, and her range of useful abilities makes her a character in which the player can invest. When Peach is kidnapped or incapacitated, her loss is felt by both the party and the player, reminding us that, while we may not need to rescue princesses, sometimes we want to.

Alfie Simpson is a writer and poet. He once rescued a countess, who actually turned out to be quite likeable.