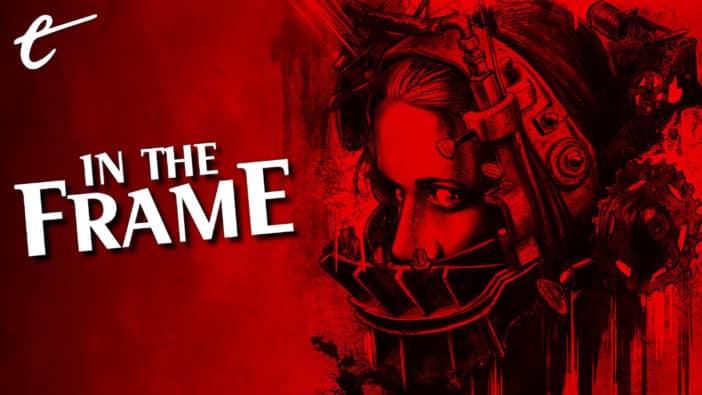 The Saw franchise is undeniably a product of the Bush era. The first film was released in October 2004, less than a week before George W. Bush won re-election. While the series thrived during the Bush administration, the lowest-grossing entry in the franchise (Saw VI) was the first released during the Obama administration. Released a week before the Affordable Health Care for America Act hit the House of Representatives, Saw VI saw the franchise tackling the health insurance industry.

When Jigsaw tried to restart the franchise in 2017, it positioned the Saw movies in the context of the Bush years. Logan Nelson (Matt Passmore), the newest killer to carry the brand, was established as a veteran of the Iraq War who had been captured and tortured. This experience is paralleled with Nelson’s experience in one of the series’s trademark traps. The audience sees scars that are initially implied to have resulted from torture in Iraq, but they actually originated from a more local torment.

Discussions of the Saw franchise in the context of the Bush era typically focus on the War on Terror. Saw is often compared to gore-driven horrors like Eli Roth’s Hostel series, and the series’s depiction of torture often framed in the era’s ongoing debates about the efficacy and morality of torture that played out in pop culture. The series’s video recordings of this graphic torture, along with taunting moral lectures, recall contemporary videos from extremist groups in Iraq and Afghanistan. 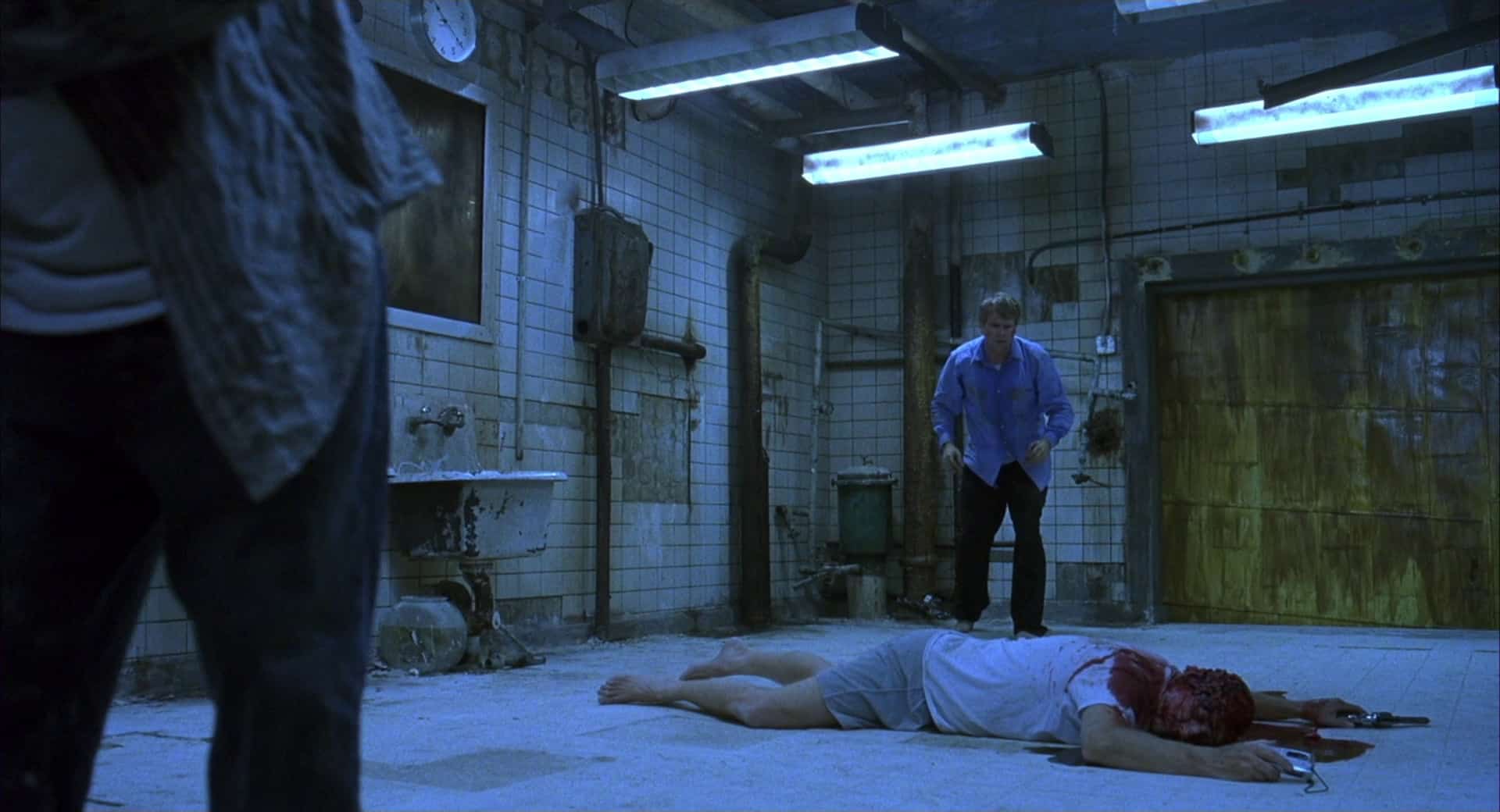 These are undoubtedly valid ways to read the Saw franchise, but they gloss over another interesting recurring preoccupation. Watched at a remove of over a decade, the Saw franchise often feels like a particularly twisted and sadistic version of reality television. After all, John Kramer’s (Tobin Bell) trademark introduction is “I want to play a game.” Kramer constantly frames his torture devices as games, insisting that those trapped within them can survive and win.

Many of the Saw movies are structured like a twisted variation on a reality television game show. In both Saw II and Saw V, groups of people wake up in a carefully engineered environment and have to complete a series of puzzles and tasks in order to escape within a predetermined time. There are moments when these puzzles feel like a sadistic riff on The Crystal Maze. Even the solo protagonists in Saw III, Saw IV, and Saw VI find themselves navigating a labyrinth designed by Kramer.

However, the Saw franchise isn’t just about characters surviving these traps; it is also about watching characters survive these traps. The Saw movies are populated with cameras, feeds, televisions, and streams. Cameras in Saw are constantly watching and recording, often broadcasting for an intended audience. It is not enough that the characters suffer; their torment must be recorded and consumed. Sometimes John Kramer is the one watching, but often the video is intended for others. 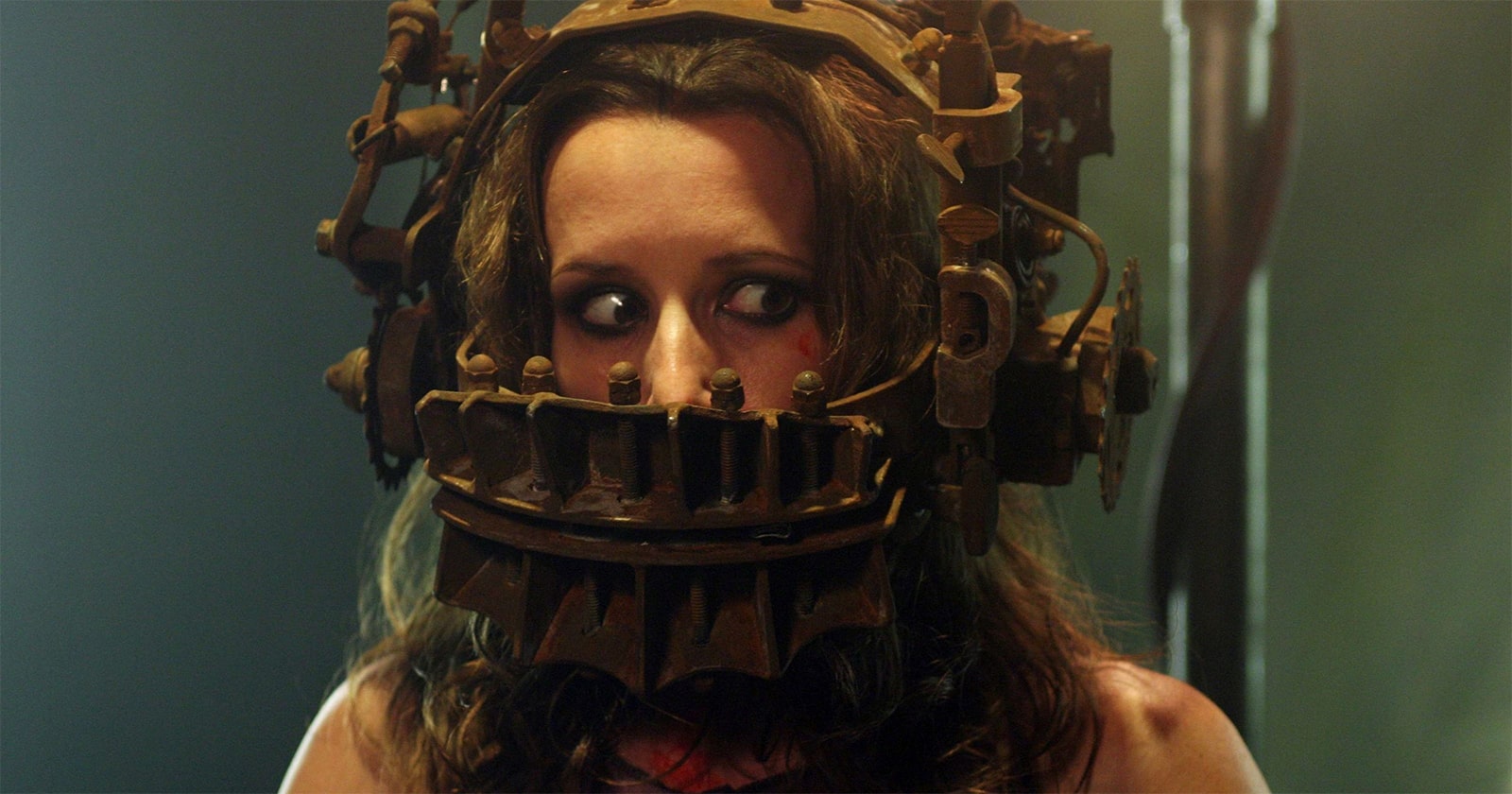 Performativity is woven into the Saw franchise. In contrast to other horror icons like Freddy Kreuger or Jason Voorhees, Kramer is often dressed in a hooded cape that makes him look like a stage performer. In Saw, Detective David Tapp (Danny Glover) and Detective Steven Sing (Ken Leung) track Kramer back to his headquarters, which looks like a workshop from The Prestige. Kramer largely communicates through a ventriloquist dummy known as “Billy,” often speaking through televisions or tape recorders. He is really into practical effects.

The Saw franchise emerged at the same time that reality television entered the mainstream. Survivor had premiered in May 2000 and became a television phenomenon. Even game shows experienced a resurgence, with Who Wants to Be a Millionaire? airing four nights a week on ABC in 2000 and 2001. In some ways, the Saw franchise exists in a weird middle ground between the two top-rated television shows of 2004, CSI: Crime Scene Investigation and American Idol.

John Kramer constructs his traps as grotesque game shows, often hinging on physical ordeals that are just more extreme versions of the trials on a show like Fear Factor or I’m a Celebrity… Get Me Out of Here! Kramer even sells these torture sessions like a game show, arguing that survivors win the ultimate prize: They realize the value of their lives. Saw 3D suggests that victims could hustle their experiences into a reality television star version of celebrity, with Bobby Dagen (Sean Patrick Flanery) coming up with a fake Jigsaw story to take on the talk-show circuit.

The best Saw films are ambivalent about Kramer’s rationalizations. In Saw IV, it is revealed that the killer’s first victim (Billy Otis) survived his game before Kramer maneuvered him into a pit of barbed wire. A sizable subplot in Saw III is built around acknowledging that many of the franchise’s games are fundamentally unwinnable, with Kramer’s young apprentice Amanda (Shawnee Smith) even murdering some of those who do manage to escape. 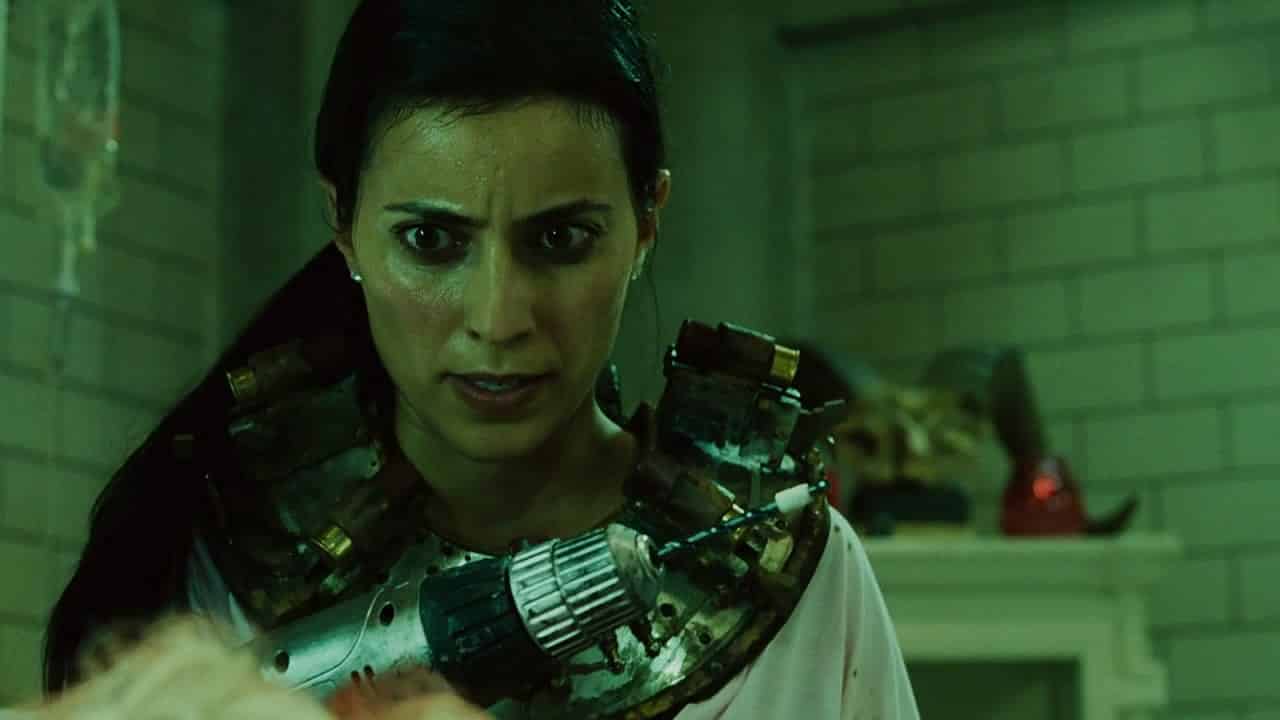 Even surviving is not a triumphant experience. Saw VI cast Tanedra Howard, the winner of reality game show Scream Queens, as Simone. Simone survives the opening game, chopping off her own arm to avoid death. She reacts with horror to the suggestion that she learned something from the ordeal. “What the fuck am I supposed to learn from this, huh?!” she demands. “What am I supposed to learn from this?!” In the same film, Easton gets to the end of his trial only to end up brutally murdered.

This gets at an interesting tension of reality television, the debate about whether it is inherently exploitative. Many of these shows subject contestants to public humiliation for the pleasure of the viewing audience. Many of these games are rigged, whether through manipulative editing or behind-the-scenes manipulation. It doesn’t even have to be physically disgusting. Simon Cowell’s brutal verbal demolitions of talent performers often play as sadistic and mean-spirited spectacle.

Building off the obvious influence of David Fincher’s Se7en on the series, one of the big recurring themes in the franchise is the question of empathy. Kramer targets Gordon in Saw and Easton in Saw VI in large part due to their lack of compassion towards him following his cancer diagnosis. This gets back to the interesting tension within the Saw franchise between observing and participating. It challenges the audience watching the film in a very direct and aggressive manner.

Saw III and Saw IV are built around this tension. Both movies happen in parallel, following solo protagonists who wander from one horrific torture device to the next. However, they are not tortured themselves; instead, they observe the torture. In Saw III, Jeff Denlon (Angus Macfadyen) is guided through a literal abattoir as he is confronted with the people complicit in helping his son’s killer (Mpho Koaho) escape justice. In Saw IV, Rigg navigates a decaying urban nightmare. 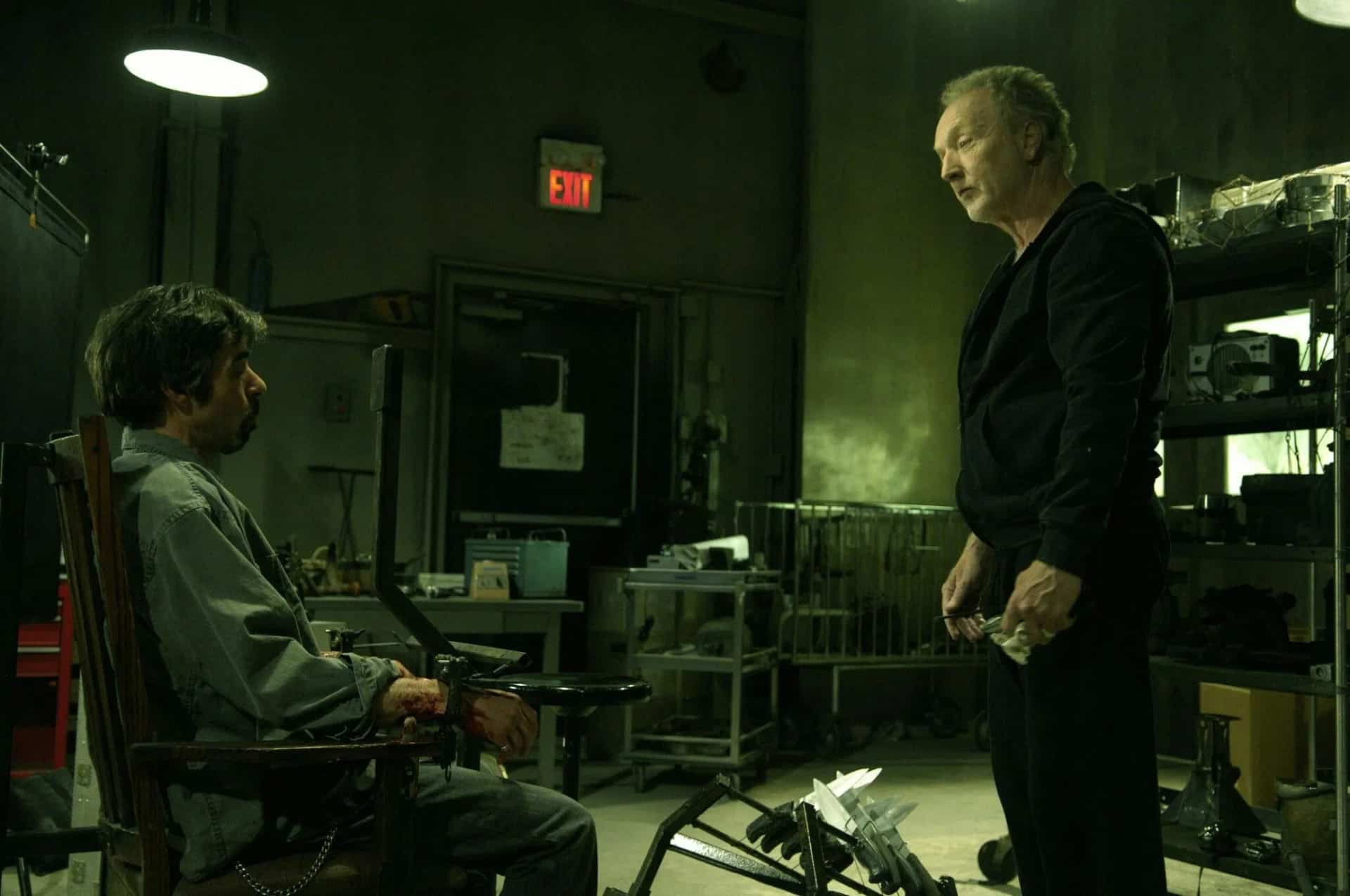 Saw III hinges on Jeff’s passivity. He walks from room to room and watches these people get tortured and murdered. He can stop the torture, but that requires an active choice on his part. Otherwise, he just watches these people suffer, with the film asking whether this affords him any catharsis. Saw IV requires a more active complicity for Rigg, who goes from a witness to an accomplice, becoming more of a participant in the torture as the movie goes along.

This question of participation and complicity simmers through the series. Kramer insists that he “never killed anyone” and that he “despises murderers,” but that’s not true. Many of his victims are targeted for their inaction. The victims in Saw V are all involved in a tenement fire, both directly and indirectly. Saw VI even parallels health insurance executive Easton with Kramer, down to his insistence that his victims failed to follow “the rules” and that he never killed anyone.

As such, Saw III gets at the central tension of the Saw franchise. For all that Kramer insists “everybody deserves a chance” in Saw V, the franchise is built around the assumption that audiences want to watch people get brutally tortured and murdered. Audiences aren’t watching John Kramer’s self-help method in the hope that these contestants will win. The basic premise of the Saw franchise is that – on some level – audiences enjoy the violence inflicted on those victims.

This moral quagmire is an aspect of the Saw franchise that roots it in the Bush era, that paradoxical contrast between the moral certainty of a public figure’s rhetoric and the moral ambiguity of their behavior. However, it also raises worthwhile questions about the audience’s complicity in all this. After all, the Saw movies are often structured in such a way that culpability and responsibility are abstract concepts. Is the audience willing these films into existence somehow complicit in them?

The Saw franchise seems to ask whether its audience is Jeff from Saw III or Rigg from Saw IV. Is the audience just numbly wandering through the charnel house, or are they actively willing the horror into being? Is there a meaningful distinction between observing and participating? Perhaps that’s the game that Saw is playing with its own audience. Maybe the choice is ours.