I love videogames and have played a hell of a lot of them over the years, but I wouldn’t necessarily say I was actually good at them. I will never top a leaderboard and I will almost always lose the deathmatch, my desire to gain mastery constantly shouted down by that little voice in my head reminding me of how many other games are out there to be played. It’s hard to become an expert at one game when you’re doing your best to play all of them, after all. But there was one game I actually did master. For a brief period, about ten years ago, I was unstoppable at Soul Calibur. And man, it felt good.

My boyfriend at the time and I had pooled our money to buy a Dreamcast at launch, as well as two games, one for each of us. I chose Sonic Adventure based almost entirely on that bit with the killer whale. (Don’t you roll your eyes at me, man – that shit was amazing back then.) He, meanwhile, chose Soul Calibur because he was a big fan of fighting games. I’d tried my hand at Virtua Fighter 2, so that he’d have someone to spar with, but I never could do much with it. I fared slightly better with X-Men vs Street Fighter, but that was due more to my love of the X-Men than actual appreciation of the game. I was disappointed that I wouldn’t get much use out of half of our Dreamcast collection, but hey, fair is fair.

At the time, we were living about 500 miles apart and only saw each other once a month, so the Dreamcast took turns living with each of us. I figured that I’d spend all that time working my way through Sonic’s big Adventure, but I actually got tired of it pretty quickly. With few launch titles for the taking – and no money to buy one even if something did appeal to me – in desperation, I finally tried Soul Calibur and immediately fell in love.

I’m not sure what it was about that game that I found so entrancing. It was beautiful, certainly, moving with a fluidity that Virtua Fighter lacked. Its characters were amazing to me, so colorful and mysterious. Remember, I was pretty unfamiliar with the genre, so the whole “group of fighters loosely connected by family secrets, revenge and other twists of fate” angle was new to me. Whatever it was keeping me glued to that controller, glued I was. I tried to learn Ivy first, because she was clearly the coolest female character in the game (this is back before she fell on hard times and had to dress herself in hand-me-downs from the cast of Dead or Alive Xtreme Beach Volleyball), but her complex moves proved too difficult for my untrained fingers. I sampled the other characters with varying degrees of success until lightning struck and I found the character with which I apparently achieved Fighting Game Synergy … 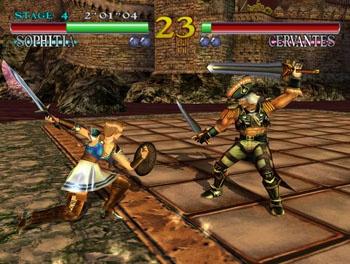 Yeah, I know. Not my first choice, either, but for whatever reason, I took to his moves like a duck to water. I learned the more basic moves in minutes and mastered his more complex maneuvers in a day or two. Eventually, I came to adore the little over the shoulder snarl he gave after winning a match. And for all of you out there preparing to sneer that he’s an easy character and beneath a true Soul Calibur master … well, no kidding. But the journey of a thousand victories begins with a single combo.

My synchronicity with Lizardman was intoxicating and encouraged me to branch out into other fighters. One by one, I studied their moves, practicing each one until I could pull it off without thinking. Hour after hour I played, poring over the fighters, the arenas, the ebb and flow of a match. I remember one afternoon I played so long that I literally had to peel my hand off the controller because my fingers had cramped so much they were frozen. If I had put as much effort into my college education as I did into learning that game, I’d probably be working at NASA now.

I didn’t become proficient with everybody in Soul Calibur‘s cast – never did master Ivy, dammit – but I was pretty damn capable with the majority of them and positively lethal with a few. I beat the game with every character, unlocked all the extras, beat my best records time and time again. I was wholly dedicated to the pursuit of Soul Calibur greatness, mentally reviewing move lists while I was at work, running through matches as soon as I got home. I thought my boyfriend would be thrilled to finally be able to play against something other than AI and he was … until he realized that his chances of beating me were surprisingly slim.

As good as I was, I doubt I was ever really competitive – playing a truly skilled human will always be more difficult than besting the computer on even its highest setting. But for that brief period of time, I felt like a real badass. There aren’t many moments in a gamer’s life that they get to really feel that way because of their digital prowess, but this was mine.

My affinity for Soul Calibur never really translated into skill with any other fighting games. I can do some damage with Dead or Alive, but a halfway decent player will beat me more often than not, and as much as I adore and appreciate the Guilty Gear series, I’m never going to be good at it. Even my Soul Calibur chops have degraded as the years have gone by, atrophying due to lack of use. With some effort, I could probably regain some of my ability, but I doubt I’ll ever be as good as I was those many years ago.

And that’s OK. Because I know that once upon a time, I could probably have kicked your ass. And that’s enough for me.

Susan Arendt got a Dreamcast for Christmas, but has yet to re-obtain a copy of Soul Calibur.