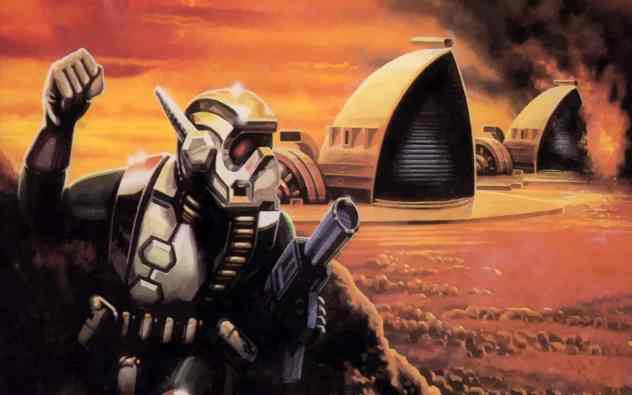 I remember playing Dune II on my Sega Genesis around 1995. The game was too complex for a controller, I was seven, and I didn’t speak English, so I didn’t have a clue what was going on. I was oblivious to the fact that it was based on one of the richest, strangest, and most successful science fiction universes ever and would define the design of RTS games for more than a decade. Later, when I became obsessed with Dune 2000 and Emperor: Battle for Dune, I couldn’t imagine that the series would fall dormant for 20 years.

Frank Herbert’s Dune (1965) tells the story of 15-year-old Paul, heir to the noble House Atreides, who travels with his parents to the desert planet Dune, home to the indigenous Fremen, giant sandworms, and a drug known as spice. Found only on Dune, spice enables faster-than-light space travel, which makes it the most precious commodity in the universe. As the Atreides take over spice production, they are betrayed, Paul flees into the desert to join the Fremen, and he eventually leads them in sandworm-powered revenge.

What sets Dune apart from other coming-of-age power fantasies is its unusual world. Sandworms replace the dragons found in high fantasy fiction; the Fremen are based on the Bedouin and San peoples, rather than the usual Nordic tropes; specially trained humans called Mentats take the place of computers and AI — amongst many other curious customs, guilds, and concepts. It’s a rich tapestry, one whose potential was clearly recognised by Cryo Interactive and Westwood Studios. 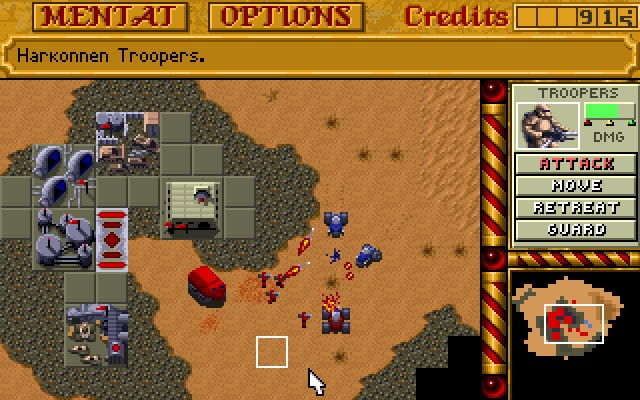 Unlike Cryo’s Dune (1992), which loosely followed Paul’s story in a strategy-adventure hybrid, Westwood Studios’ Dune II (also released in 1992) opted for an original plot and a simpler approach.

You control one of three houses — Atreides, Harkonnen, or Ordos (the last of which is not part of Herbert’s canon) — in a race to conquer Dune. At the start of each mission a Mentat gives a briefing to move the story along and presents a choice of regions to invade. The invasion is structured around more or less the same three-part gameplay loop. Build wind traps (power generators), refineries for gathering spice, and some basic defenses. Use the spice to pay for better structures and units to consolidate your military. Then scour through the fog of war on the map to find and destroy the enemy. The game is presented from a bird’s-eye view and controlled from a selection menu, a mini-map, and some quick commands that are placed at the side of the screen, while Frank Klepacki’s weird blend of orchestral metal plays in the background.

To anyone who played Command & Conquer, or indeed any number of ‘90s and early-‘00s RTS titles, this template should be immediately familiar. It was a winning formula that was reused and iterated on endlessly by classics like Red Alert, Warcraft, Age of Empires, and Total Annihilation. In 1998 it was used again in essentially a remake of Dune II — Dune 2000 — which added multiplayer support, live-action cutscenes starring the likes of John-Rhys Davies, and an aesthetic that borrowed directly from David Lynch’s deeply flawed but visually compelling 1984 film.

Although Dune 2000 wasn’t critically well received, the franchise was on a high. A painfully low-budget, but lovingly made and faithful, adaptation of the novel aired on the Sci-Fi Channel in 2000. Frank Herbert’s son was finishing the Prelude to Dune book trilogy based on his father’s notes. And a new third-person action adventure adaptation of Paul’s story was in development. It made sense that Westwood Studios would follow Dune 2000 with a direct sequel.

Rendered in full 3D, with three separate campaigns that spanned multiple planets and four discs, additional factions that drew deeper on Frank Herbert’s lore, higher production values for its cutscenes, and new mechanics like sandstorms and rideable sandworms, 2001’s Emperor: Battle for Dune was grandiose in everything but its gameplay. It hadn’t really evolved past the core loop introduced in Dune II, and it was becoming apparent that after 10 years the format was running out of steam.

Five months after Emperor, the third-person action adventure game Frank Herbert’s Dune released to terrible reviews. A year later Brian Herbert and Kevin J. Anderson published the dreadful The Butlerian Jihad, the first part of a second prelude trilogy. And a year after that Westwood Studios folded. The Dune games were done.

What’s surprising is that they’ve been dormant for 20 years. The games suffered from a run of bad luck and inconvenient design choices, but the source material never stopped being rich and compelling, the RTS genre didn’t stop innovating, and there has been no shortage of bold and ambitious developers. 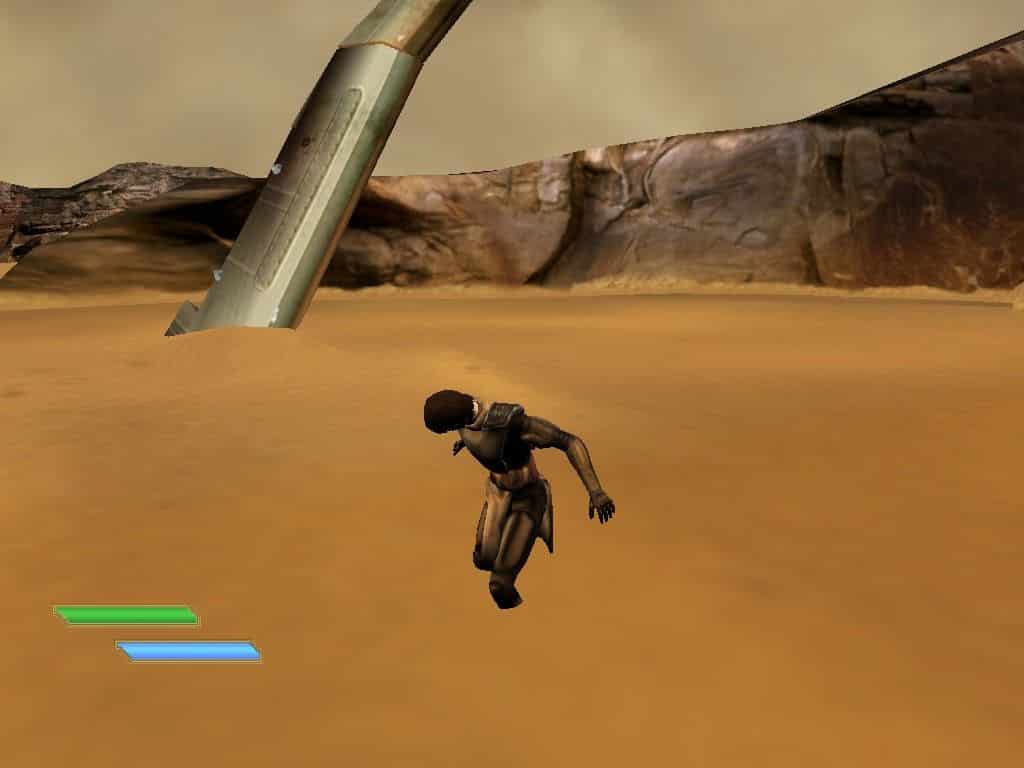 The likes of Supreme Commander demonstrated how to make an RTS on an enormous, almost planetary-level scale. Its ability to mix juggernaut and human-sized units on the same battlefield could have been an ideal model for handling sandworms, spice harvesters, and ornithopters alongside the Fremen and other smaller units.

Total War: Warhammer showed how to combine deep turn-based political play with large-scale real-time battles in a fantastical setting. Together with the Dune Wars mod for Civilization IV and the Third Age: Total War mod for Medieval II: Total War, it’s an obvious example of how one might go about implementing the full complexity of Dune’s many factions and their intrigues alongside RTS elements.

And while Homeworld: Deserts of Kharak didn’t do anything too complex or original, its atmosphere — from the nomadic main faction, to some of its concepts (e.g., the Great Maker Whose Hand Shapes What Is) — felt more authentically Dune-like than anything I’ve come across in years. It gave a glimpse of what a Dune RTS might look like on modern hardware.

The good news is that with anticipation building for Denis Villeneuve’s two Dune films, last year’s reissue of the Dune board game, and the confirmed development of multiple Dune video games, it might be time for Dune to return to the glory days. I just hope that the games are handled with the care they deserve.