If you would be so kind as to indulge me an imaginary scenario: The year is 1974. You’ve been sitting in a movie theater. The Godfather: Part II is concluding. It was good – perhaps not as iconic as the first film, but with a more sprawling sense of narrative and a more fully-realized world. You’re in no rush to leave, since the movie was pretty long to begin with and the score is, of course, lovely. So you sit through the credits. As the last bit of text scrolls up, you stand at last to leave … only to see that the screen has suddenly brightened back to life.

The film, it seems, isn’t quite over …

Up on the screen is the familiar sight of the rolling Italian countryside – surely some “old country” real-estate holding of the Corleone Family, you’re mind tells you. You can even faintly recall Hyman Roth alluding to something like this in the Miami scene (maybe). A small farm vehicle pulls to a stop near the edge of what we gather is a vineyard, and out steps the grave, familiar figure of actor Robert Duvall – or, rather, Tom Hagen; Don Corleone’s consiglieri. A-ha! So this is still the movie. An extra scene: A treat for the true fans who stuck all the way through. Neato!

As you and a handful of other stragglers sit back down to watch, Hagen looks gravely out over a horizon. We can’t see what he sees yet, but whatever it is is cause for concern. He calls one of his lieutenants over and issues terse instructions: “Tell Michael we’ve found it.”

As the lieutenant hurries off, we now cut to a wide shot. Hagen and his men are standing on the rim of a massive, freshly-blasted crater in the center of what used to be a quaint Sicilian field. An explosion? A bomb? Some sort of plane crash? An act of vengeance from the Pentangeli Family? We don’t know. In a final closeup of the offending impact-site we see what has apparently piqued so much concern: A small metallic cylinder, roughly the size and shape of a futuristic flashlight. A swell of ominous music … and a hard cut to black. The end.

… What the hell was that supposed to be?

Most of the remaining patrons are entirely puzzled, but among the chatter it soon becomes apparent that at least one attendee recognizes it, and is explaining its significance to his companions with an excitability that borders on the absurd: “It’s called a lightsaber.”

Light-what? What’s this kid on about?

“Yeah! I saw a picture of it in Famous Monsters last month; it’s a movie called Star Wars!”

“It looks awesome! It’s about wizards, only it’s in space! With aliens and rockets and stuff!”

Three years later, that “Wizards in Space” movie would be the biggest thing that had ever happened, and looking back you’d realize that that curious “extra scene” at the end of Godfather II had been a defining moment in time: The moment when The Godfather ceased to be a nominally “real world” story of mobsters and became joined to a larger world of magical fantasy … the moment when everything anyone had thought they’d known about those films was changed irrevocably by a fleeting glimpse of a futuristic-flashlight.

Imagine how that would’ve felt.

Now, of course, here in reality, that never occurred. The Godfather and Star Wars have nothing to do with one another. But if that had happened, well… what would that have been like?

We’re about to find out. 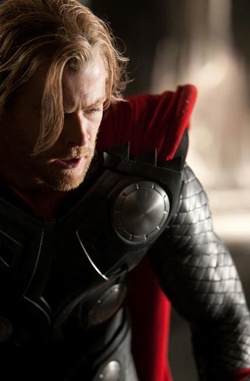 As anyone who’s seen it can deduce, the above creative-writing exercise handily describes the teaser scene that comes after the ending credits of Iron Man 2. Except that we’re in the desert and instead of Tom Hagen our familiar face is that of Agent Coulson, an operative of S.H.I.E.L.D. – the covert government group that’s been hounding Iron Man to join its mysterious “Avenger Initiative.” And instead of a lightsaber the crater contains an ancient, medieval-looking hammer.

That hammer, as any superhero devotee or student of Norse mythology can tell you, is Mjolnir – the enchanted weapon of The Mighty Thor. As in “The Norse God of Thunder.” That Thor.

Of course, anyone who’d know the Marvel Universe model of Mjolnir on sight already knew that A.) Thor is the next Marvel Films movie after Iron Man 2, and B.) That the Marvel Films movies exist in a shared universe building toward a character-uniting Avengers feature. So to them, the hammer is a welcome but not entirely unexpected treat. To those for whom the hammer holds no immediate significance, it probably didn’t mean much of anything … and probably won’t unless they also go see Thor next year. Thus, in both cases the real impact won’t be felt until later – if at all.

But right now, I’m looking at that hammer and realizing that the whole world just changed.

Think about it. At the beginning of Iron Man 2, there’s a lot we know about what the rules of “reality” are in this series. Mainly, we know that it takes place in something fairly close to the real world as we’d recognize it – just with significantly more-advanced technology in the fields of mechanical-prosthetics (read: weaponized armor) and, at least according to Tony Stark’s presence in The Incredible Hulk, bio-engineering.

In other words, the world of Iron Man – and, by extension, the world of the Marvel Movieverse – is a world of contemporary science-fiction; it remains as such right up until that last tag after the credits … when the Hammer of the Gods seemingly falls from heaven to obliterate everything we thought we knew.

A quick primer for the non-comic-literate – and, let’s face it, Thor was never exactly Superman-popular: In the shared world of Marvel, the Norse Gods (and most of the other ancient pre-Christian pantheons of deities at one point or another) were both real and still around. Asgard (look it up) still hovers at the fringe of the universe (or, occasionally, over major American cities) and the various good and evil Gods (and trolls, and giants, and … you get the idea) are still sneaking about the modern world causing mischief and engaging in acts of heroism. That’s the scenario – apparently with heavy emphasis on the mythic fantasy – currently being brought to life in director Kenneth Brannagh’s Thor movie… and that’s what seems to have crash-landed in Iron Man’s back yard.

Semi-realistic contemporary-scifi? Not anymore. A big-ass crater and an oddly-anachronistic Viking Hammer say otherwise. In fact, they say that Iron Man (and The Hulk, let’s not leave him out) are living in a world that also includes the mystical presence of the Viking Gods of Olde. The entire genre … the entire context of three films has been completely rewritten by a single shot.

What other strange and otherworldly things are creeping at the edges of Iron Man’s world that we’ve not seen yet? The Iron Man of the comics has been to outer-space, encountered extra-terrestrials, done battle with dinosaurs and dragons. He’s traveled back in time to become a knight of Camelot. His arch-nemesis is an immortal Chinese sorcerer wielding weaponry stolen from aliens. At the beginning of Iron Man 2, all of those things seemed entirely out-of-reach, far too odd to plausibly appear onscreen.

But not anymore. Now, damn near anything looks possible. The Hammer said so.

And who am I to argue with the God of Thunder?