Driving around the day of the Super Bowl is like living in a post-apocalyptic dream. I drove by the mall this Sunday. I don’t usually do this. I usually try to avoid the place, if possible. The continuous stream of shoppers coming and going is like a spider’s web of potential fatalities, each hurried shopper eliminating one of my possible selves. Drive by the mall enough times and I’m certain the counter will reach zero and my time will be up. Heisenberg’s Parking Principle.

But Sunday I had to take a chance. I was in a hurry and the shortest distance between Point A (my house) and Point B (where I needed to go) was down Heisenberg Way, past the mall. Lucky for me the universal constant (mall = traffic up the ass) was taking a day off. Super Bowl Sunday is like a national Holiday in reverse. It’s not on a Monday, like most holidays, but on a Sunday, the day we usually reserve for lying about in pajama bottoms or mowing the lawn. And unlike on most national holidays – and most Sundays – on Super Bowl Sunday, people don’t shop. Not at the mall anyway.

Driving past the mall on Sunday, automatically marking down the number of potentialities in which I survived to my 34th birthday by one, I noticed a strange thing: There wasn’t anybody around. It was noon on a Sunday and there wasn’t anyone coming or going to the mall. Nobody even there. At noon. On Sunday. Parking lots were more than half-empty, the carefully designed retail rat trap entrance devoid of cars waiting to enter or leave. It was eerie. And awesome. If only I’d needed to shop.

Instead I needed snacks, so I went to the grocery store, and that’s where I found them: the teeming mass of humanity that on any normal day would be clogging the arteries of the mall. This is the equivalent of opening a storage room door in the abandoned mall and finding it full of zombies. The grocery store was full to bursting with soon-to-be partygoers, all aching to fill their baskets with the exact same things I was after. I wasn’t sure what to make of this. I don’t usually do what everybody else is doing. This caused a momentary crisis of faith. I persevered.

The game, it would seem, isn’t simply an athletic contest between to great teams, the resolution of the question of who’s the better (and the best) football squad in the land. Instead, for most Americans, it’s a reason to use the word party as a verb.

Full disclosure: I have to confess to being a Patriots fan and watching this Super Bowl, not out of morbid curiosity as in past years, but because I was genuinely invested in the outcome. I don’t actually watch football, but I occasionally like to turn a game on and cheer just for fun. I imagine I’m not alone in this. Living in Boston for several years, I acclimated to the joy/love/hate relationship most New Englanders have with their team. A bond that causes them to tip over cars and chase policemen with rocks when they win. I can only imagine what’s happening there today. I assume nothing. New Englanders feel they deserve to be miserable. They’re probably taking the Patriots’ loss as the inevitable correction of their previous good fortune. I imagine many folks are out buying bomb shelters as I write this, preparing for the worst while hoping for the best.

I failed at replicating a New Englander on Sunday. I wasn’t prepared for the worst, a Patriots loss. I was preparing for the best while expecting the best. Perhaps that’s why they lost, he says, now, finally emulating a New Englander. By the fourth quarter I was spilling part of my precious beer and scaring the neighbors with my exultant cheers. I felt confident they’d pull it out. Not in an “I believe in a positive force ruling the universe that would never allow me to experience defeat” kind of way, but because I know they’re a good team. Turns out the Giants are better. Alas. But it was fun to watch.

But watching these monumental sporting contests always makes me wonder about the type of person who invests so much of themselves into the performance record of professional athletes that they wear jerseys to formal events when the team is doing well and become clinically depressed when they aren’t. We say things like “our team,” as if the team, like in the days of old, is made of athletes chosen from among the populace who represent our clan in the great struggles of mankind. But in truth, most of the Patriots aren’t even from New England. And if they live there, it’s only part-time. You can’t even treat college athletes that way, as most of them are recruited from all over the country. High school, I think, is the last bastion of that sort of thing, but who really wants to watch high school kids play, except Texans?

But the teams are named for the place they play, which makes sense. You couldn’t call them Team 32 and expect anyone to show up to the games. And without a regional identity, you’d have a hard time coming up with a mascot, which would cut into merchandizing sales, which would ruin the whole thing. I get it. I just don’t get why so many people fall in love with a team just because they live near the stadium. Is it a laziness of affection? Are we not willing to root for a team we’d have to drive more than 40 minutes to watch play? Or is it some kind of instinctive longing for the good old days when “our team” meant something. When The Patriots might have been actually from New England. Either way I can’t help calling them “my team” and hoping they win, being sad when they don’t. 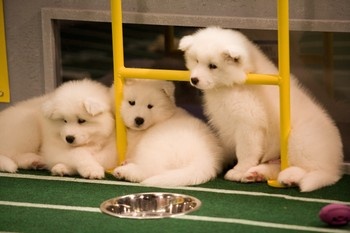 I took a break mid-game to watch the Puppy Bowl on Animal Planet. I’d never seen this before. Basically, they put a bunch of puppies in a pen and give them toys to fight over. Then film it. For three hours. At half time they bring on kittens. That’s it. Just small, baby animals falling all over themselves and having a blast. It’s pointlessly fun for all the right reasons and I loved it. The Puppy Bowl, more than anything, reminded me why events like the Super Bowl are important and, simultaneously, so irrelevant.

Super Bowl Sunday is as much about the football as the Fourth of July is about a piece of paper. Super Bowl Sunday is about the party, and more than that – the spirit of community. It’s about feeling a part of something that draws people together for layered dip and frosty drinks. It’s about having a point of reference with which to relate to other human beings. It’s about distilling the esoterica of everyday life into something simple we can agree on or not. Something we can chew on and debate. Numbers and stats and the thrill of victory or defeat.

Russ Pitts is an Associate editor for The Escapist. His blog can be found at www.falsegravity.com