If you made me describe what’s going on in The Surge, I’d tell you it’s a promising blend of Dead Space and Dark Souls, but that elevator pitch wouldn’t properly tell you how exciting I think this game is given the limited slice of play I saw.

First day on the job. Near-future world, style: You show up to get fitted with the cyber-gear and nerve jacks for your new exoskeleton! This is factory work, and you’ll need to move and lift one ton equipment on the regular. So you get gassed, knocked out – it’s in the contract, the company pays for the surgery – and hooked up to your new exo. But something goes wrong. When you wake up, everyone else in the factory is either zombie’d, barricaded into an office, a haywire robot, or missing.

Now get out there and fix it. 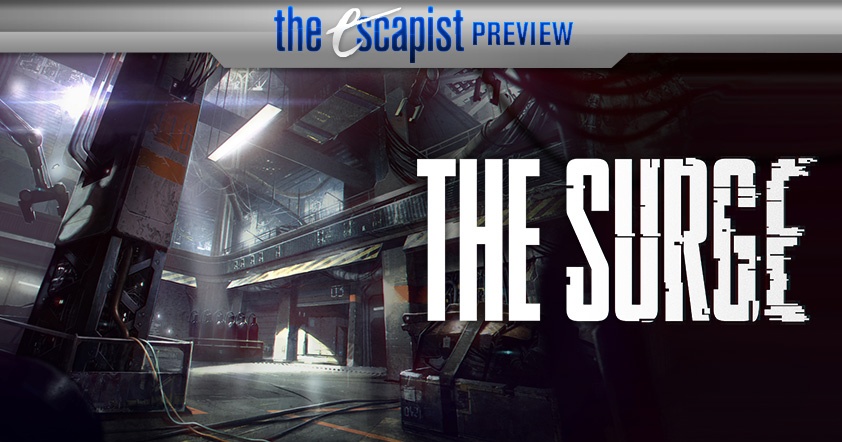 Like other games in what I’m taking to calling the Exploratory Action Roleplaying Game genre – like developer Deck13’s previous Lords of the Fallen, or the Dark Souls games out of Japanese developer From Software that popularized the genre – The Surge isn’t interested in stopping gameplay to tell a story. “You can just go through it without paying attention,” said Klose, “what would be a cutscene in other games isn’t one in ours.” From what I could see, the developers are telling a sci-fi tale with a focused scope. You’re a hapless schmuck stuck in a terrible situation and you’ve got to get your way out of it. The security robots are against you, the crew sent in to clean the factory you were supposed to work in of “contaminated biomass” is against you, and the environment itself is against you. You’ll die a lot, and when you die you respawn at unlockable safe houses – and the enemies respawn too in classic EARPG fashion.

“The world is not friendly. The environment is not designed to take it easy on you,” said Klose.

The Surge is something new for the Exploratory ARPG – a foray into Science Fiction. It’s a near future setting, one the developers want to be an “extrapolation of today’s world into the future” according to Deck13 CEO Jan Klose. That means your gear isn’t standard fantasy fare. It’s vibro-chainsaws, plasma cutters, and industrial-grade powered exoskeleton supplement units. Instead of rings or necklaces, or magic trinkets, you’ve got internal implants.

The sci-fi conceits also help the developers guide you through the world well. It’s reasonable that your exoskeleton might not be powered up enough to jumpstart a particular elevator yet, or you might not have proper security clearance to get through a blast door. No more staring at a wooden door thinking “my giant sword could break that.” Instead, you follow conduits around and figure out where something’s power is coming from – and why it’s not getting there. As you find problem spots, your exoskeleton’s HUD pops up explanatory bits telling you what kind of power level your suit will have to muster to fix it. Suit power is like your level – it’s what kind of gear your tech can make work.

I know I’m not doing the idea justice, but let’s just say that playing in-game tech support to clear a path looked pretty enjoyable in the brief gameplay demo I saw.

Sci-fi doodads allow for some pretty neat gameplay conceits beyond environment – like incorporating HUD elements into character equipment. Like most games of its kind, it’s endurance driven and has health bars, but in order to see your opponents’ you’ll need to equip a monitor implant. Feel confident fighting without knowing their HP? Well, then you’ve got a loose spot for something like a healing injector instead. Klose wants to keep as much of the game as possible inside the game world. “We’re also looking at a tutorial implant for people who want a little more of a walkthrough,” he said.

The combat is quicker than Lords of the Fallen. Much quicker. Even basic dodges can carry you half the length of a room, so getting distance on deadly enemies isn’t that hard – but they’re either deadlier or faster to compensate. There’s an extra layer of combat to manage that I thought was really clever, as well. When you have an enemy locked on, you can then target their individual limbs and parts – letting you try to bypass your enemies’ most armored bits. Which limb you destroy using custom finishing moves also determines what loot you get from enemies. Limb targeting gives the game’s fight-die-repeat gameplay some extra staying power: If you die and go back, you’ve got another shot at a complete set of gear from those enemies. In the example we saw, an untimely death to a wandering security robot let the player pick up a few extra parts for a full suit of heavy gear.

Speaking of gear, the developers made a big deal of not locking players out of cool gear. “In many RPGs, you make a particular build and that means you can’t use certain gear. You go for daggers and you’re not strong enough to use a cool sword – even if it’s more in line with the character you want,” said Klose. “We want to make sure that we don’t have that problem. You’ll be able to use most equipment somehow. So if you find a neat weapon or armor, you’ll get to use it without replaying the entire game.”

The Surge is a promising looking game, and it seems like Deck13 has learned a lot of lessons from their problems with Lords of the Fallen It’s currently scheduled to release some time in 2017.