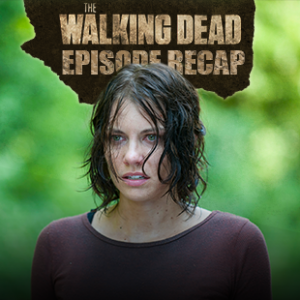 The first half of The Walking Dead’s Season 4 was a meandering mess and that’s putting it kindly. But what I didn’t see is that the mid-season finale set the stage for a far more interesting second half. Let me explain.

Two great things sprang from the prison fight last December (besides the end of the extended-past-its-natural-life Governor storyline.) First, it signaled a change in tone from static despair to a sense of purpose and hope. In that fateful episode, Rick shook off his apathy and declared “We’re not too far gone. We can still come back. We all can change.” Then in last week’s episode, Michonne told her dead husband that she knows why she continues to fight. And in this episode we see how many of the remaining characters struggle with the will to fight on.

And this leads up to the other refreshing direction for the series prompted by the prison storyline coming to an end: characters are forced into new relationships as they flee the carnage of the prison slaughter with whoever happened to be next to them at the time.

Let’s look at how both of these play out as we catch up with the rest of the survivors in this episode. 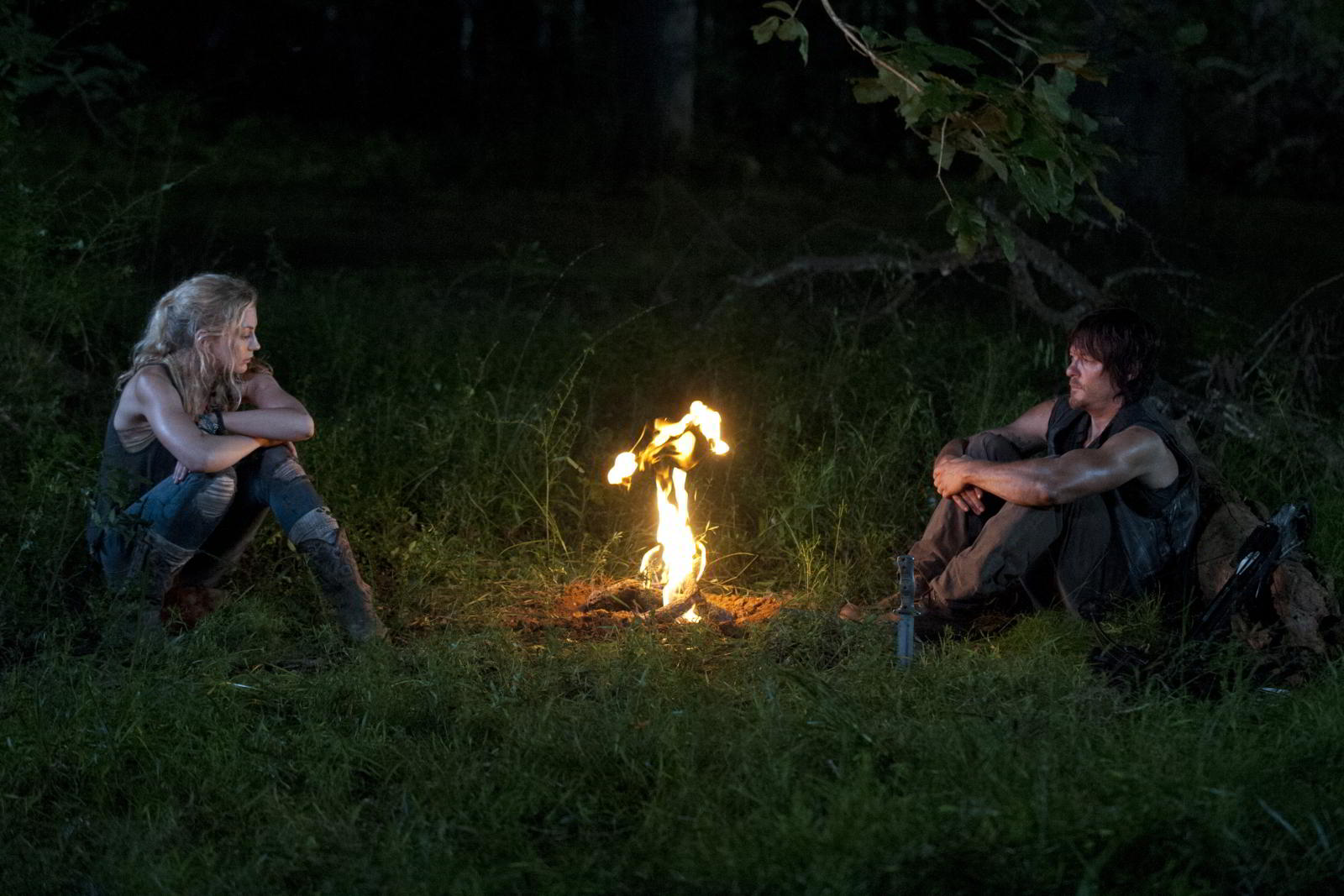 First, we have loner and protector Daryl on the move with idealistic Beth. She couldn’t have ended up with anyone better in terms of survival in the wilds, but she is willing to walk away from him to reunite with the rest of the group. We hear the thoughts she writes down in her diary as they fend off zombies in the woods. She talks of renewed hope, but when she discovers a small child’s shoe among a group of feasting zombies she breaks down crying. Even her desperate hope that there are other survivors can only carry her so far. Unlike the other stories in this episode, hers starts with hope and ends in despair.

So where do Daryl and Beth go from here? Does she get harder and more withdrawn like Daryl? Is that a bad thing given that the weak don’t last long in this post-apocalyptic world without a protector (and even then, not always in that scenario either.) Or are they setting this two up for a relationship? In the final scene, when she is in tears over the dead child, Daryl does nothing to comfort her, so he has a long way to go if they are heading in that direction.

Tyreese and the children of the corn 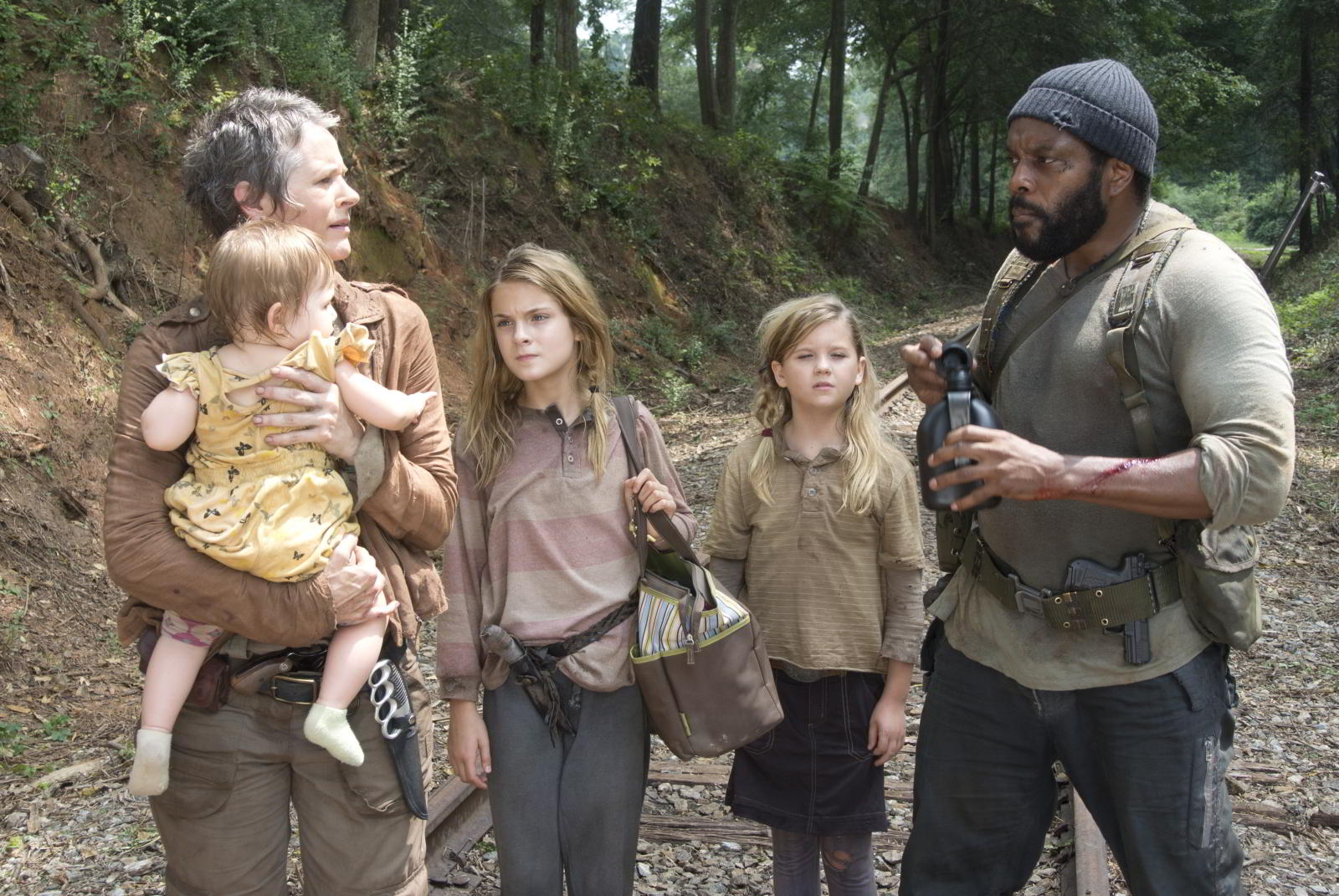 Next up is Tyreese, who was last seen running after Mika and Lizzie as they fled back into the prison during the big fight instead of away. Now he is trudging through the forest not only with those two, but with baby Judith. Huzzah! The baby has survived. But it won’t stop crying and attracting walkers.

Tyreese is a master at braining zombies with his hammer, but knows next to nothing about taking care of kids. And nowhere is this more apparent then when he leaves the two scared girls alone with a crying baby so he could investigate the sound of human screams in the distant. I want to say that he used the screams as an excuse to get away from the kids, whether he was conscious of that motivation or not. It allowed him to leave a situation he was in over his head with badly and run to a situation where he knew what to do.

After Tyreese takes care of the zombies feeding on a family by the railroad tracks (the ones Beth finds later), he hears a shot from the gun he left in the hands of the girls. Fortunately, someone they all know found the girls. Unfortunately for him, it’s Carol, who killed his girlfriend to stop the spread of a deadly virus in the first half of the season.

The one lone survivor of the zombie attack tells them that there is a sanctuary for kids he heard about at the end of the tracks. Tyreese, Carol and the girls head down the tracks and find a sign marked Sanctuary and a map showing the convergence of train tracks on to a place marked “Terminus.”

Tyreese started this episode in despair not knowing what to do with an infant and two traumatized girls and ended it with new hope after having been found by Carol and discovering a possible new sanctuary.

Does Tyreese know it was Carol who was responsible for Karen’s death? He doesn’t let on and only shows relief at the sight of her, probably more for having someone to talk care of the kids than from seeing the kids have survived. But Carol’s secret is going to come out sooner or later and then what? Hammer time?

And let’s talk about Lizzie’s psychopathic tendencies. First she mutilates some rabbits by a log. Missed that? Watch again. In the first 15 minutes of the show, Beth and Daryl pass by a log with mutilated bunny carcasses. Then in the second 15 mins, Lizzie is sitting on that log next to two live rabbits playing with her knife. Then, when she tries to keep the baby from crying she clamps her hands over the infant’s mouth and enjoys it so much she loses track of zombies shambling closer to eat her demented brain and her sister’s desperate cries for help.

The show also suggests the question of which is better for survival: Mika running at the slightest sense of danger or Lizzie’s enjoyment of inflicting suffering. This is all the more disturbing given that the debate is explored through two young girls. I sincerely hope the writers don’t drop this particular thread and it has many interesting possibilities to explore as the season goes on. Do the adults protect and nurture someone who may have no empathy for other people? How much is a human life worth if that human is also a danger, even if the danger is wrapped in the face of an innocent-looking young teen?

Maggie and the Magic School Bus of horror 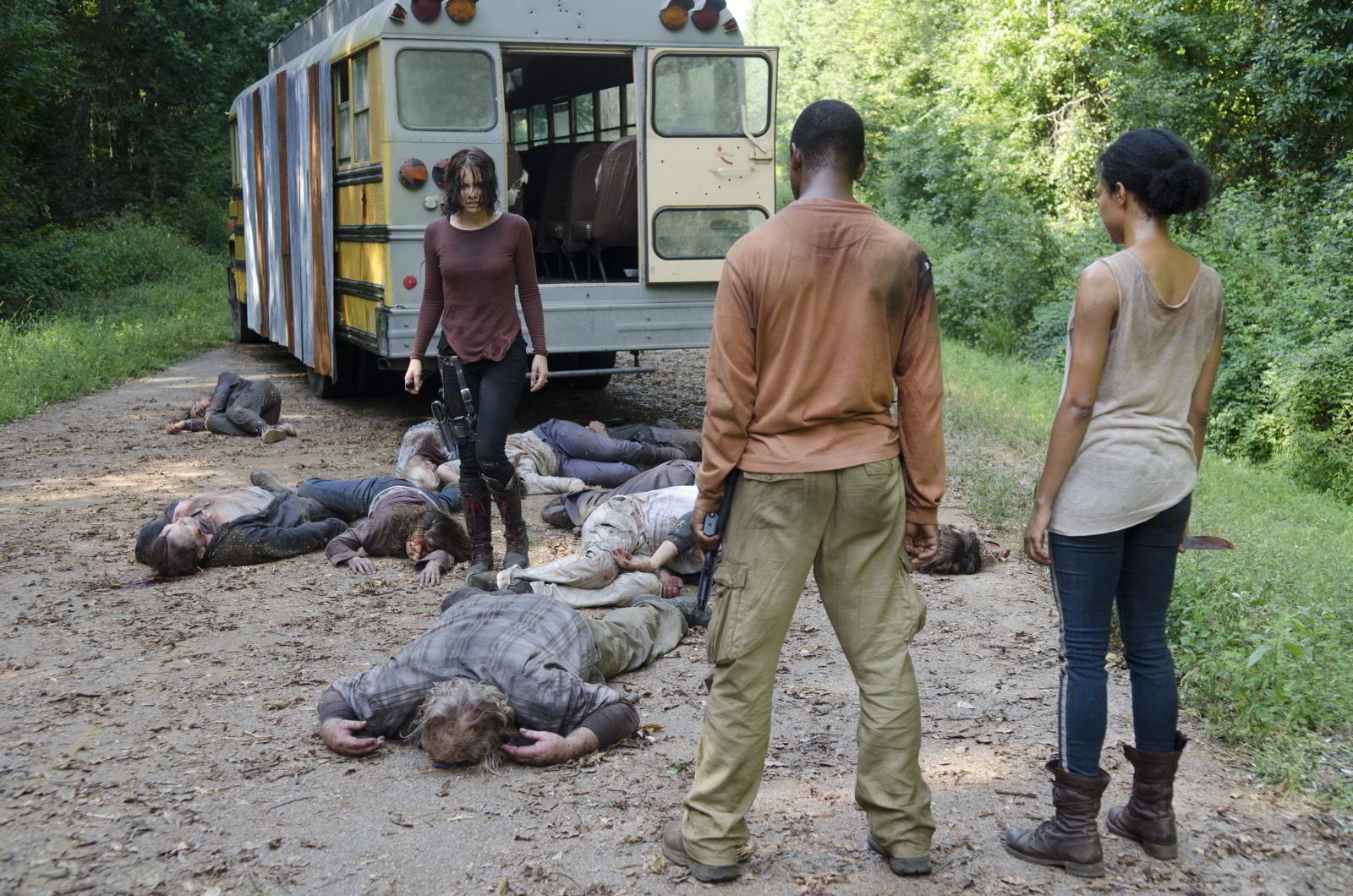 Maggie managed to get the still-ailing Glenn on the bus during the prison attack, but wasn’t on it herself when it took off. She tried to follow afterwards on foot with Sasha and Bob in tow. Now we find them regrouping by a river. Sasha tends to Bob’s non-lethal gunshot wound and then realizes Maggie isn’t going to stop looking for the bus. Maggie insists they don’t have to join her, but there is still strength in numbers and they all hit the road.

Unfortunately for them, they do find the bus and everyone inside that was evacuated from the prison has been turned. Maggie is devastated and tells the other two that she needs to know for sure if Glenn is one of new zombies or not. Sasha is, again, not thrilled, but sees Maggie won’t be dissuaded and agrees to help by holding the emergency exit door in the back of the bus to let only one out at a time. This works at first, but soon the walkers all burst out like maggots from a rotten fruit. The three make short work of the zombies and Maggie goes inside to check on the ones still inside.

She works her way to the front where she discovers a zombie face down that has Glenn’s thick black hair. She kills it brutally, then slumps into a bus seat and breaks down crying. We don’t see if it was Glenn or not.

We all knew Maggie was a bad ass, but in this episode she’s a machine. She’s Arnold-damn-Schwarzenneger in his early Terminator days and not a zombie gets by her that she doesn’t kill (remember that one that got its face pounded into soup on the side of the bus by her?) She has steeled herself for the worst but hopes for the best and she spends her time on screen ping ponging between the two. At the end, we don’t if she is crying tears of relief or despair after discovering the identity of the Glenn-like last zombie on the bus. I thought this entire performance was a brilliant end to this particular story segment and played expertly by actress Lauren Cohan.

So what’s next for Maggie, Bob and Sasha? So far Sasha seems wary of Maggie’s agenda, but is wisely staying out of her way. Bob has been backing Maggie and seems just a liiiiiitle too friendly with Sasha. With Maggie’s question answered (one way or another), where do they go from here?

I’m interested to see Maggie’s storyline separated from Glenn for awhile. Yes, she has had that in the past, but even then her thoughts and motivations have revolved around him. Now what does she do with herself? Will she go the way of Michonne or Rick? Yes, Rick. She clearly has leadership skills and others follow her. But we’ve all seen where that has gotten Sherriff Grimes… 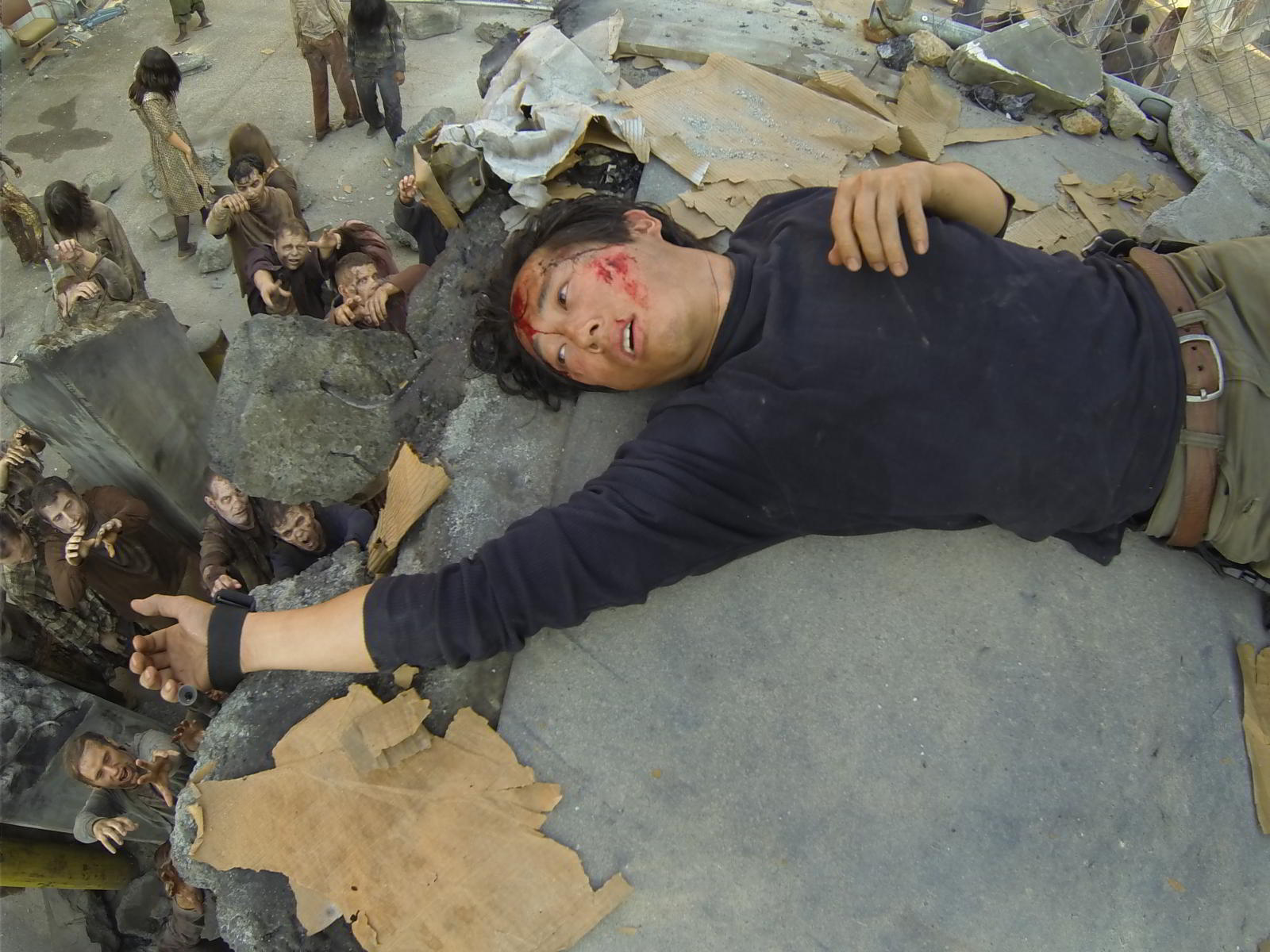 In the fourth part of this episode’s exploration of despair and hope among new pairings, we see that Glenn is alive. He had exited the bus before it left the prison when Maggie wasn’t looking. He is the only one left at the prison and the yard is now infested with walkers. He raids the place for supplies, dons full riot gear and makes a break for the exit. He almost makes it when he spots Tara from the Governor’s militia, sitting traumatized behind a gate watching the walkers. He hesitates, but goes back and helps her get out as well.

When they get to safety, Tara questions why he saved her since she betrayed them all. Glenn doesn’t sugar coat it: he needs her help to find his beloved Maggie. He has hope.

Walkers attack and Glenn fights them off, but collapses after the last one falls. When Tara checks on him, a walker jumps her and she takes out all of her rage and despair on it. When it is a puddle of unidentifiable brain parts, she looks up to see three new people have arrived in an armored vehicle and they want to know she has anything of value.

Glenn had his moment of despair early in his story, while searching the prison for supplies, but after that he is determined to survive to find his wife. Tara on the other hand, goes through a bigger transformation. She starts catatonic in grief and despair, but Glenn shows her mercy and she begins to believe that there is hope. Of course, now she has to deal with the three mercenaries that just showed up.

So there you have it. Four stories of hope and despair that throws together the survivors in new configurations and finally pushes this story forward past the slow trudging march that was the first half of the season. I like the new way the characters are interacting with each other and how they are moving from mere surviving to finding reasons to live. I think the viewers needed a reason to root for these people and not just watch them stew amongst themselves. Here’s hoping for more of this kind of storytelling as the season continues.