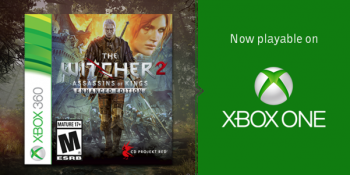 The game is also free to download for a limited time.

From now through through February 5 at 12 am UTC, The Witcher 2: Assassins of Kings will be available for free for Xbox One owners in the U.S., Canada, UK, France, and Germany, CD Projekt Red announced today. The announcement coincides with Microsoft’s reveal of the latest batch of Xbox 360 games now available via backward compatibility – a list headlined by The Witcher 2: Assassins of Kings. The full list can be viewed below:

Microsoft also stated that, moving forward, new backward compatible games will be released as they are ready, rather than on a set monthly schedule. There will also be a dedicated Xbox One Backward Compatibility page on the Wire, where Microsoft will be sharing recently released titles, along with “spotlight stories” on popular recently added games. You can continue to vote for games you want to see available through the program here.

Save 25% on a One-Year Xbox Live Gold membership!