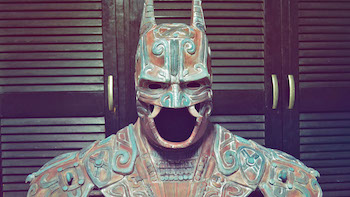 Stuff like this will confuse the heck out of future historians.

In honor of the 75th anniversary of Batman, Warner Home Entertainment Mexico cooked up a clever promotion. It worked with the Mexican Museum of Design, and invited a group of artists to rework the Dark Knight however they saw fit (which could have gone horribly wrong). One artist decided to make his design more historic, using ancient Mayan designs taken from a “death bat” cult.

Kimbal based his design off of the old Mayan god Camazotz, which literally translates to “death bat”. The name makes more sense when you realize that Camazotz had the body of a man and the head of a bat, and was generally associated with darkness, night, and the underworld. Mayan mythology doesn’t say anything about crime fighting, but does mention beheading a guy and using his head to play a ballgame. Kimbal might need to retcon that last bit.

Sure, Batman might be old, but he’s actually much, much older than that. You see, Batman is a primal force of the universe. Just like Wind, Fire, and Water, Batman always has been, and always will be.