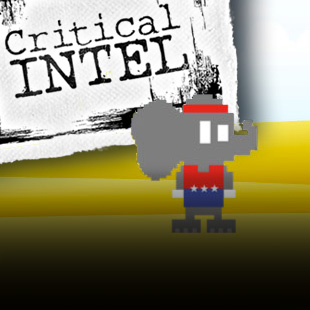 In some ways, you have to feel bad for the Republican Party.

Demographics have put them between a rock and a hard place – their social conservatism attracts older voters but turns off younger ones, and catering specifically to the youth vote risks alienating their base. Worse still, efforts to redefine and evolve conservatism for the next generation have mostly fallen flat or met a lukewarm response, with incumbents too nervous to make the overhauls they need for big boosts. Short-term concerns keep making them kick the can on long-term problems.

So instead of a policy shift, we get 2014 Mission Majority, a video game the National Republican Senatorial Committee (“NRSC”) hopes will encourage young voters to donate to Republican efforts in the midterm elections and join up as campaign volunteers.

There’s a problem, though: Mission Majority is awful. It’s slapdash beyond belief, and it’s hard to pinpoint the game’s intended audience. And ironically, for a game that preaches fiscal conservatism, it comes off as an eyebrow-raising waste of money.

Before we get to why, I’d like to say that I think the NRSC’s idea was basically a sound one. Advertising politics through games is nothing new. The Obama campaign bought in-game ad space in several games, including Need for Speed: Carbon and Madden NFL 13. Further, creating games as political ads makes sense. Even simple games can make sophisticated arguments, and because games allow us to play out different scenarios, they’re ideal for communicating the consequences of choice. Games also have an inherent “cool” factor with young people, especially if it’s either well-produced (like 7 Up’s Cool Spot) or has a winking in-joke feel (Burger King’s Sneak King). That’s largely how ads work – they either have to be slick or funny, and everything in the middle dies.

2014 Mission Majority is neither slick nor funny.

The problems start with the title. Shouldn’t it be Mission: Majority, in the same way the TV show was Mission: Impossible? Without that colon in the center the phrase is meaningless, even more so when you add the 2014 in front of it. Normally I wouldn’t criticize a game over an ungrammatical title, but it’s indicative of the game’s lazy design philosophy that they couldn’t even get the title right.

Then there’s the paywall. When you visit the site, you’re confronted with a mandatory login screen forcing you to link the site with your Facebook, Google+ or email account. It’s a backward design decision. The point of the game – presumably – is to recruit new donors and volunteers, but by asking them to make that commitment before allowing them to play the game, you’re going to lose people right from the start. Advertising is supposed to entice and convince someone into buying a product – but Mission Majority holds back its content until you pay them with your contact details. I’m willing to bet that if you looked at the metrics for Mission Majority you’d find that most visitors never make it past the sign-in screen.

Once you sign in, (with 10 Minute Mail, in my case) it quickly becomes apparent that Mission Majority is not a subtle experience. A brief introduction screen introduces you to your player character Giopi – “GOP,” get it? – a pixelated elephant in a red white and blue muscle shirt and sweatband. Giopi’s mission is to collect golden keys that will “unlock the Senate” for the Republican Party.

The game tells me that these keys represent campaign volunteers, but I don’t see the connection unless the NRSC locks volunteers in the phone bank until they’ve called enough numbers.

In any case, to advance to the next level, Giopi has to collect three golden keys while avoiding the Goomba-like Taxers – “job-destroying” tax bills that Harry Reid and Obama sent to stop him.

“Jumping on top of them suppresses their high taxes,” Mission Majority adds, in a line no comedy show could top.

Two things become clear as soon as you drop into the game: first, that Mission Majority was finished on a quick turnaround, and second, that this game is changing no one’s mind about the Republican party.

I’m tempted to call Mission Majority a Super Mario Bros. clone, but that might give the impression that it retains design elements that make the Mario series fun. It’s more like one of those edutainment knockoffs that’s supposed to teach you Bible trivia. Like Mario, Giopi runs, jumps and kills enemies by stomping on them, but all the little touches are removed. Giopi’s run speed doesn’t vary, he has no scoot motion when changing direction, and his jumps are leaden with a high arc. The last example creates the worst problem in the game, since the Taxers are significantly taller than Goombas, leaving little room for error when you splat them. This jump distance goes from annoying to maddening once you realize that the game doesn’t progress left to right, but instead climbs upwards. Giopi’s hops are barely adequate to clear the gaps between platforms, and the game likes to put enemies on small platforms to restrict landing space. If you fall you’ll rarely stop partway, but plummet straight to the ground where you’ll begin the climb anew. The difficulty curve is so punishing that I never fully got the hang of it until my second playthrough. There’s huge potential for players to rage quit before they get to the donation and volunteer sign-up page. 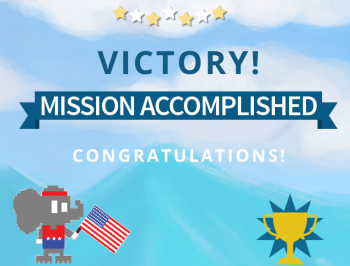 Only one word can describe the game’s aesthetic sense: ugly. The music makes you dive for the mute button.

Even when you kill a Taxer, there’s no fun involved. They don’t do the satisfying squish animation like Goombas, but instead disappear and play a damning-sounding audio clip from a Democrat. Most are from President Obama – old classics like, “you didn’t build that,” and “if you like your health plan, you can keep it” for example – but there also quotes from others that are hard to identify by voice. The clips don’t really work. They’re sampled out of context from a wide array of issues, and not all of them fit with the theme. If I’m stomping tax bills, why am I hearing Obama say there “isn’t even a smidgeon of corruption” in his administration? What do Hillary Clinton quotes from the Benghazi hearings have to do with anything? Mission Majority presents the quotes so context-free that I had to look several up to remember what they’re related to. It’s a muddied message, at best.

The second level introduced a new enemy type, the Mudslinger, that can “hurl false and empty rhetoric.” Thankfully, you can “jump on them to mute their misleading words.”

I confess, I got excited when I saw the Mudslinger. Since the Taxers were Goomba replacements, I reasoned, perhaps the mudslingers would be Hammer Brothers stand-ins. Perhaps every stage would add unique straw man enemies. Death Panel doctors sneaking toward you in turtle shells! Ghosts that try and take your guns away! My imagination ran wild. The game wasn’t good, but it’d at least be amusing to see Democrat stereotypes filling out the villain roster in this crapsack Mushroom Kingdom. Maybe this game did have a sense of humor.

That dream faded quickly. Funny thing: the Mudslingers don’t throw anything. They don’t even move. They wave their arm back and forth as if they’re miming throwing mud balls at you.

And that’s when I realized what must’ve happened: whatever intern designed this game originally programmed the Mudslingers to live up to their name, but found that alongside the stiff controls and platform jumps, dodging missiles made winning impossible. My alternate theory holds that they ran out of time – explaining why Mudslingers are the last enemy type introduced in the game. The only new element between Stage 3 and Stage 4 is that in the final stage, you flip switches representing the races the GOP has to win for a Senate majority. When you’re halfway through, you get pixel art of a sad Joe Biden – the only delightful thing in the game.

When you win, the game rewards you with a splash page of Giopi holding an American flag – and directing you to donate money or volunteer. There’s also a link to the site’s store, where you can buy Giopi T-shirts, coffee mugs and a 2014 Mission Majority poster.

But Mission Majority‘s sloppy design isn’t why it fails – it fails due to its ill-defined and poorly targeted message. While the closing text talks about cutting red tape and regulations, the game’s enemies are tax bills and Democrat spin doctors. The kill quotes are from a wide range of issues. There’s no unified message the game tries to get across, except that Democrats are bad – and the game presupposes that you already think so.

I can’t figure out which audience this is trying to galvanize. If it’s an attempt to reach out to young voters, it’s an abysmal failure. There’s no argument presented for why you should support Republicans, the game’s low quality will turn off young people, and the sign-up page scares off the curious. I doubt Mission Majority will precipitate anyone to cast their lot in as a volunteer who wasn’t already planning on it. The novelty and press associated with it might drive more people to the site than a simple donation or volunteer page would, but the question is whether enough people will stick it out through the pixelated torture to cough up money afterward. My guess would be “no.” The game is bad, and not the brilliantly calculated so-bad-you-have-to-share-it variety like Carly Fiorina’s Demon Sheep ad or King Roy the Rat. You just want to close out and forget.

But Mission Majority‘s biggest problem is that it simultaneously preaches fiscal responsibility while looking like a colossal waste of money. It’s a poor product with a neglectful design philosophy. Throughout the whole ordeal, I couldn’t help but wonder how much it cost to print all those Giopi T-shirts nobody’s going to want. The irony is that the NRSC created an incompetent advertisement in order to convince people to give them more ad money, and it’s embarrassing.

Could they have done it better? Yeah, they could have. Maybe they could’ve made a small-scale strategy game about how to win over a district with door-knocking volunteers and phone banks, or an Angry Birds parody about breaking through to voters. Hell, Mission Majority would’ve served fine had they went whole-hog on the joke and spent a little more time on the design. Instead it just comes off as tone deaf. “Hey, you kids like games, right?” it seems to ask, before providing the worst game possible.

It’s like a watching a high school guidance counselor rap about abstinence.

Still, it’s at least an innovative attempt, so points for tying, NRSC.

But the next time a confused young man stomps on a tax bill, know that I’ll be calling you up for a quote.