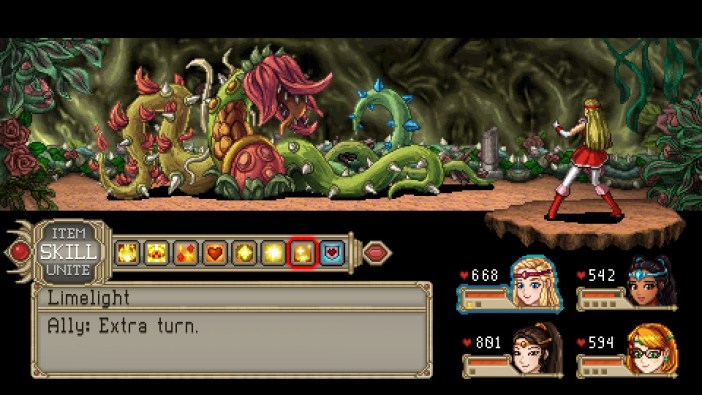 Zeboyd Games has revealed the first official trailer for This Way Madness Lies, a turn-based RPG featuring Sailor Moon-ish magical girls, and it has a release date of November 10, 2022 on PC via Steam. It will retail for $9.99, and it will be a smaller, more bite-sized game than Zeboyd’s previous RPG, Cosmic Star Heroine. The developers estimate it will clock in at 4-to-5 hours depending on difficulty and play style.

This Way Madness Lies takes place in Verona, Italy, where protagonist Imogen leads the Stratford-Upon-Avon High Drama Society. Her school group helps produce community plays — and fight monsters from alternate dimensions based on Shakespeare plays for some reason. It’s probably best not to think too hard about that. In any case, here are some partially tongue-in-cheek features to expect from This Way Madness Lies ahead of its November release date:

Personally, I’m not expecting an extravaganza of a story, as the narrative was definitely the weakest point of the otherwise stellar Cosmic Star Heroine, but it’s extremely likely Sailor Moon fans will have a fun weekend munching through this unique RPG next month.