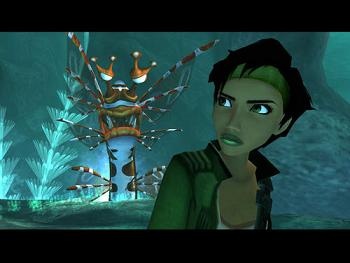 To fill your workweek with some good old-fashioned gaming, we’ll take a look at a different game (or two) released every weekday this week in history, November 30 through December 6. Perhaps you’ll be reminded of a game you’ve never finished or be intrigued by a game you meant to try and didn’t.

Kicking the week off, we’ve got Ubisoft’s 2003 quiet classic, Beyond Good & Evil. Much like Grim Fandango, BG&E remains one of those games that many gamers discover way after the market has given up on it. For those who are not familiar with the title, you take the role of Jade, a spiky haired, sensibly dressed, competent journalist whose world is under attack from a sinister alien force. The government has adopted the “Problem? What problem?” attitude yet clearly there are problems. Jade is recruited by the underground IRIS Network, set to take on the occasionally morally gray area of being a photojournalist and expose the truth as she finds it. As journalists have noted, it is hard to determine just how well the game did in the marketplace, but it was well received by critics. Earlier this year, Ubisoft finally confirmed plans for a sequel with no firm release date, leading many gamers to go “well, it is about time – also, yay” at the news.

Not just one, but two games also made an appearance on December 2: 2002’s The Legend of Zelda: A Link to the Past and 2003’s Deus Ex: Invisible War. Another tale focused on “conflict, conspiracy, and deceit”, Invisible War was reported as neither being a commercial failure nor an overwhelming success, but still sales were good enough to merit another take at the franchise several years later. Eidos confirmed in 2007 a third installment was on the way, this time a prequel to the original, neatly solving the problem of the clear-cut endings of Invisible War.

Although A Link to the Past came out originally in 1991/1992 for the SNES, the GBA version refreshed this title in gamers minds in time for the 2002 holiday season along with companion piece Four Swords. A Link to the Past continually topped sales and personal favorite charts of many gamers during its initial run, and made its way to number three on to IGN’s 2007 “Top 25 Game Boy Advance Games of All Time” upon re-release.

For Wednesday, check out Max Payne 2: The Fall of Max Payne. The original Max Payne was so popular, according to reports Take-Two purchased the IP and everything related to it for the sum of $10 million dollars. At the time of the announcement of Max Payne 2, Kelly Sumner, then Chief Executive Officer at Take-Two commented:

“A critical component of Take-Two’s corporate strategy is to control the intellectual property rights to our key brands and as a result, build the most value for our company. Max Payne has been one of our most successful product franchises to date.”

Was it a worthwhile investment? That’s up to debate. Max Payne 2 failed to perform in the market as projected, the media loved it but was baffled at consumer behavior, gamers shrugged, and life went on. The sequel was confirmed in 2004 but has yet to appear in solid form. Strangely enough despite this fact and Take-Two’s preference to pin lowered financial projections on the game’s “disappointing sales”, a related movie remained in the works and was released to USA theaters in October of this year. It did well on opening weekend but fell completely flat almost immediately afterwards. Rotten Tomatoes summed it up handily as suffering “severely from an illogical plot and overdirection”.

Following the success of Crash Bandicoot, developer Naughty Dog developed a brand new platformer series, Jak and Daxter. The first game appeared on the PlayStation 2 in 2001 and continues to remain popular to date with several sequels.

On December 5, 2006, two titles for the handheld market appeared in stores: PlayStation Portable’s Metal Gear Solid: Portable Ops and the DS title Castlevania: Portrait of Ruin. Both entrants in the “long running series” category, these release buddies also shared the same publisher, Konami. Even though Portrait of Ruin picked up a couple of awards in 2006, Portable Ops led the pack to just barely squeeze itself into Gamespy’s “Overall Top 10 Games of 2006”. Notably, Portable Ops also performed better in the marketplace.

Once you hit the weekend, we recommend taking a look at some of those classic and underplayed games in your library, such as the original Zork, which came out in early December of 1980.

Research Manager Nova Barlow did not check out the Max Payne movie. It just didn’t look all that interesting.