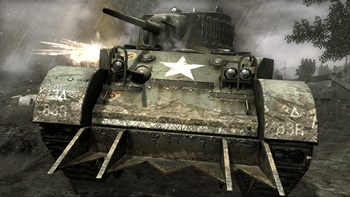 This week in gaming history, we’re doing something a little different and taking a look at the top five games for the entire month of December for the last five years to find out what’s been hot during the holiday season. No future trends are predicted here, although you’re welcome to speculate in the forums.

Of the top five, only Madden NFL 2004 was a long time entry to the charts, continuing to slide down the charts through December.

Call of Duty snuck into the top five with the first console entry of the popular series, but it was GTA: San Andreas that brought along the sales for December 2004, and woke up a sleepy summer in 2005 with a nice fresh cup of hot coffee. San Andreas scooped up a fair number of Game of the Year awards, as well.

In 2005, Madden began a two-year holiday time dominance of the sales charts. This installment of the popular series was also a launch title for the Xbox 360, and featured quarterback Donovan McNabb on the cover. Following the unusual trend of bad things happening to Madden series cover players, McNabb suffered a sports hernia in his very first game of the season. He has since recovered and maintains his role as a long time member of the Philadelphia Eagles.

Even though NPD had Legend of Zelda: Twilight Princess sitting lower on the lists for December originally, it swiftly issued a clarification in early January, revealing the title sold 1.1 million units, sitting squarely between Madden and Call of Duty. This reflective correction pushed Gears of War out of the top five. The ever-present Madden series doesn’t make for an interesting chart, but the fact that a series releaed in August each year can still be a holiday-time hit is pretty darn impressive.

A holiday season that did not feature perennial favorite Madden on top of the charts, December 2007 saw two titles released just the previous month top the charts. Success was not fleeting for our chart leaders, however. According to the NPD Group, Chart Track and The GFK Group, Call of Duty 4: Modern Warfare sold more than seven million units worldwide by mid-January, 2008. Super Mario Galaxy also saw considerable success, shifting at least 6.1 million copies by March of this year, coming in third only to Wii Sports and Wii Play, which had the advantage of being bundled with the Wii and a spare controller, respectively.

Researcher Nova Barlow wishes you all a joyful holiday filled with most of the games on your personal wish list. See you next week!