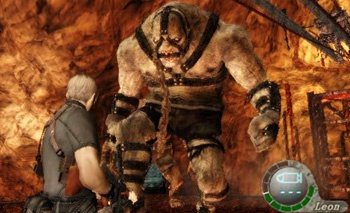 Capcom is totally in the mix this week as we look at historical items of interest from October 19 through October 25. We’ll also return to the 1980s, but first, we’ll head back just three short years to 2005.

Highly rated Resident Evil 4 made its debut back in 2005 for the PlayStation 2 (the GameCube edition having already thrilled fans since earlier in the year), with critics singing its praises loud and clear. Dubbed the “single greatest horror-themed action game ever created” by Gamespot, Capcom’s game went on to win Game of the Year at the 2005 Spike Awards. For fans of the series, they will be happy to note sequel Resident Evil 5 is currently scheduled to debut on March 13, 2009.

Call of Duty 2 made a sparkling debut on the Windows platform back in 2005 as well, with the console version hitting the streets a little less than month later. The game also went on to gain praise by critics and reigned supreme on top of the Xbox 360 Live charts for quite some time. It also was the first title to sell over one million units on the Xbox 360 in the United States, according to Activision. 2005 was just big for games, with Battlefield 2: Modern Combat (PlayStation 2, Xbox), The Sims 2 (PlayStation 2, GameCube, Xbox), and Soulcalibur III (PlayStation 2) also appearing on shelves this week.

Just last fall, Capcom was caught with its guard down as the pre-orders for Phoenix Wright: Ace Attorney – Trials and Tribulations turned out to be more than double initial estimates, causing shipment delays and missing pre-order bonuses. The third game in the series, Capcom generated a bit of buzz earlier in the year (February) by hinting the game would not be released in the United States at all and ran a contest to make fans “beg for it,” even with the fourth game in the series (Apollo Justice: Ace Attorney) waiting in the wings for a Japan release two months later. Trials and Tribulations gained high ratings upon release, with the game being praised for being “deeper, more complex, and in places, remarkably darker” than its two predecessors. The game did fairly well worldwide, with most recent reported sales numbers reaching 0.46m, almost matching the original game’s sales figures.

Capcom was faced with rather disappointing numbers in Justice for All‘s (Phoenix Wright 2) sales initially and it is easy to see why they were just a bit skitterish in exporting and translating future titles from Japan. Fortunately the fans have followed through in earnest with the sales and enthusiasm by telling Capcom to “TAKE THAT!” and give them what they want – more Ace Attorney games. Capcom swiftly apologized for the month delay experienced by many pre-ordering customers by providing a discount coupon for its online store and shipping out those wayward Phoenix Wright plushies, bringing the trials and tribulations of a fair number of unhappy customers to a just end.

Traveling much further back in time, classic game developer Infocom found this week in October to be a great time to re-release various games on its formidable roster of offerings. 1982 brought forth the updates to Zork III (Release 12) and sci-fi thriller Starcross (Release 17). Three years later, fantasy title Sorcerer came out with “Release 13”, to be followed a year later with mystery offering Moonmist‘s “Release 9”. These periodic releases often fixed little game bugs, which helped many a text adventure fan from beating their head on their desk for very long. Zork Zero: The Revenge of Megaboz was released for the first time in 1988 during this timeframe for the Macintosh (PC owners had to wait a few months). Having exhausted the possibilities for sequels in the Zork series by this point, Infocom designed a prequel to the famous series instead. Critics labeled the title an “entertaining and fulfilling beginning (or end) to the Zork series”. Unlike many earlier Infocom games, Zork Zero was not given a difficulty rating, although fans have deemed it “hard but not ridiculous to finish”.

That’s all for this week, come back to the history vaults next week to see what else we’ve uncovered!

Upon writing this article, Nova Barlow realized of all the Infocom titles she did play – somehow she forgot to give Starcross a try. This is clearly an unacceptable situation and will be fixed.