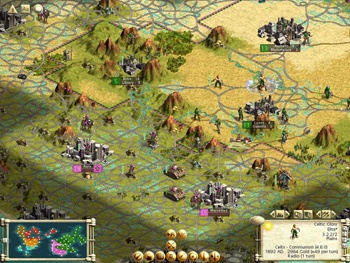 This week in history revealed a trend towards world domination as Civilization III appeared to celebrate 10 years of Civilization, and the PlayStation 2 taught other consoles of its generation the meaning of ‘ownage’. Come travel through time with us and see what we uncovered for the week of October 26 through November 1.

In serious gaming news, a team of students from Carnegie Mellon University’s Master of Entertainment Technology (MET) program announced PeaceMaker this week in 2005. A game simulation of the Israeli-Palestinian conflict, the player took on the role of either the Israeli Prime Minister or the Palestinian President and attempted to bring peace to the Middle East. Two of the students involved in the project went on to form ImpactGames, a studio designed to “promote change through interactive media”.

For those inclined more towards domination than peace, Civilization III from Firaxis made its way to stores in 2001. The accolades were swift and numerous as many (including the Academy of Interactive Arts and Sciences) concluded the titles was worthy of nearly a dozen “Strategy Game of the Year” honors. Educators latched on to the game by incorporating it in history classes, with one teacher citing the usefulness of Civilization‘s ability to demonstrate the “feedback loop between war and societal change.” Civilization III went on to add two expansions, inspiring many 4am “one more turn” gaming sessions for players before giving way to Civilization IV and the most recently released Civilization Revolution.

The biggest news this week returns us all the way to 2000 with the debut of the PlayStation 2 (PS2) in the North American market. Greatly anticipated before it even left the warehouse, Sony immediately ran into a shortage situation upon release. However, when it was broadly hinted Sony might be creating an artificial shortage SCEA’s Andrew House spoke with Time magazine and commented, “It’s absolutely ridiculous to suggest that by limiting our audience we would successfully be pursuing our business goals.” As a partial solution, Sony postponed availability online in order to make those units available to retailers. These days there are no shortages of PS2s, with over 140 million units being sold to date. The PlayStation 2 clearly knows all about world domination, remaining in production long after other consoles of its generation have been discontinued.

Sony, proving that it also knows a bit about something about change through interactive media, has also taken the opportunity to revisit the hardware system over the product’s lifecycle by updating it as the company deems necessary. In 2004 this week, Sony introduced a revised PS2 (quickly dubbed “Slimline’) to Europe and North America markets that sported a sleeker design and network ready ability. Sony has remained firm to its commitment on a ’10+ year’ lifecycle as the aging PlayStation 2 continues to sell in a respectable fashion. 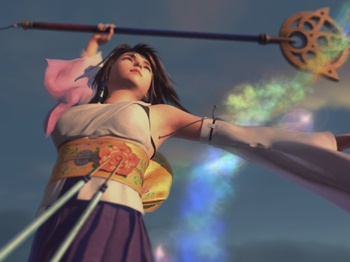 Analysts often point to Sony’s ability to tie up exclusive, high quality titles as key in winning the last generation’s console wars. For example, the twelfth installment of Square Enix’s Final Fantasy series debuted this week in 2006 exclusively on the PS2. (Enthusiastic Final Fantasy historians will note this week also represents the launch of massive multiplayer title Final Fantasy XI in North America for the Windows platform.) Exclusive titles (2007’s God of War II ) can still be found for this eight year old console and non-platform unique offerings such as the Rock Band and Guitar Hero series continue to breathe fresh life into the system. With regards to Guitar Hero, this week last year also saw the debut of Guitar Hero III: Legends of Rock on a number of consoles, and of course, the PS2.

Because she is a total Final Fantasy fangirl, Nova Barlow will admit it was Final Fantasy X that pushed her over the edge to purchase a PlayStation 2.