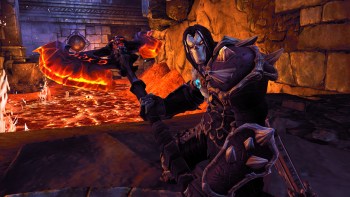 Australians who ordered Darksiders II from GAME will still get their preorder bonuses.

The trouble with retailer-specific preorder bonuses is that if, between the time of your preorder and the launch of the game, your retailer of choice goes under, you’re pretty much hosed. That obviously doesn’t happen very often, but it did happen to some unlucky Darksiders fans in Australia after GAME announced in June that all of its Aussie stores are closing. People who preordered Darksiders II from GAME were supposed to get the Deadly Despair DLC pack at no charge, but no stores means no preorder bonus.

Fortunately, Darksiders publisher THQ is in a position where it needs to reap all the good will and positive press it possibly can, and so it’s stepping up to the plate to take care of the situation. The publisher announced that it will honor the preorder bonus commitment for all GAME customers, who will need to email a copy of their original GAME preorder receipt, along with a copy of a new preorder receipt from any other retailer, to enquiriesau@thq.com. Deadly Despair download codes will be sent out to qualifying customers after the game has launched.

It’s kind of a no-brainer for THQ; after all, it’s not often that a company has a chance to do an effectively zero-cost solid for its customers. But a nice move is a nice move, so props to the company for making it. Darksiders II comes out on August 14 for the Xbox 360, PlayStation 3 and PC, while the Wii version is currently slated for launch later in the year.