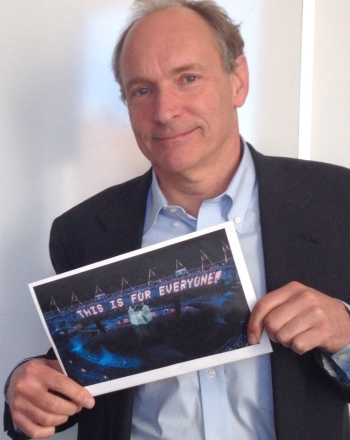 The man who invented the internet has used the 25th anniversary of the World Wide Web to launch Web We Want, a campaign for global adoption of an “Internet Users’ Bill of Rights”.

Sir Tim Berners-Lee is a British scientist, and 25 years ago he proposed a distributed hypertext system to his management at CERN. First dubbed “Mesh” and later “World Wide Web”, Berners-Lee had effectively invented the internet. This March marks the 25th anniversary of the proposal, and Berners-Lee is using the occasion to launch a campaign for an “Internet Users’ Bill of Rights”. The campaign, called Web We Want, aims to see an Internet Users’ Bill of Rights drafted in every country. Coordinated by the World Wide Web Foundation, Web We Want will work to raise public education about open internet, support organizations who are fighting for an open web, and provide a small grant program that can quickly provide resources to organizations and movements.

The overarching goal of the World Wide Web Campaign is that everyone, everywhere should be able to participate in an open, universal Web. The campaign has five principles:

Berners-Lee launched the campaign with a series of interviews, including an AMA on Reddit. Speaking to The Guardian, Berners-Lee says, “Unless we have an open, neutral internet we can rely on without worrying about what’s happening at the back door, we can’t have open government, good democracy, good healthcare, connected communities and diversity of culture. It’s not naive to think we can have that, but it is naive to think we can just sit back and get it.” Privacy rights, free speech, and copyright issues would be major components of an Internet Bill of Rights. Given the recent court loss of the FCC’s net neutrality rules and the ongoing revelations from Edward Snowden about the lengths global spy agencies have gone to (including considering the spying potential of the Xbox Kinect), the Web We Want campaign has a lot of work ahead of it.