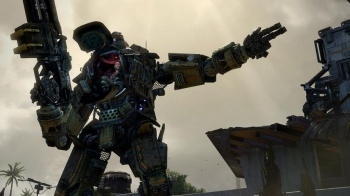 Titanfall‘s optional story elements won’t take long to experience; no more than a few hours in all.

Respawn Entertainment knows that people aren’t excited about Titanfall because of its gripping social commentary. People are excited to punch giant robots in the face with other giant robots, and that’s fine. Granted, the lore looks fantastic and the somewhat unique multiplayer campaign will almost certainly be worth experiencing, but it’s not going to take up your entire tour of duty. Heck, it might not even fill your first playing session: the story elements can be completed in just a couple hours.

Respawn co-founder Vince Zampella gave a breakdown on the concept of Titanfall‘s multiplayer campaign. “It’s about looking where people spend most of their time,” he explained. “Generally people will burn through a single-player campaign as fast as they can … For us, it was about pushing the boundaries of what multiplayer is. Let’s take all that great single-player stuff and build up the world. That world that you’re going to spend a hundred hours in should be the most full-featured.”

The story elements are tie in directly with multiplayer matches, so the gameplay experience won’t be terribly different whether you’re playing the campaign or not. “A couple hours” should be enough to see the whole story from one faction’s perspective, but you can get a unique story from both sides of the conflict, doubling the amount of narrative.