The Xbox 360 controller, as an example, has thirteen different user inputs. That’s not including the Start, Back, or Xbox buttons, and that’s counting the D-Pad as one input instead of four. So with a slightly more generous definition of “user inputs,” we get a count of nineteen.

This is why the Wii is the dominant console of this generation. Our games really are fun, but unless you feel like mastering a dozen-plus inputs – including, in many games, dual-analog joysticks requiring a seemingly ambidextrous mastery of independently controlled facing and movement – you’re never going to experience all this great fun.

So screw that. Let’s make a typical current-gen FPS work on an Atari 2600 joystick that has only one analog stick and one button. I’m going to use Far Cry 2 as our example. That game’s controller diagram features the following list of inputs:

That’s eighteen different inputs. When you get in a vehicle, you switch over to a different set of thirteen inputs, for a grand total of thirty-one.

Must we use every input mechanism on the controller? What if all we had was one analog stick and a single button, like the famous black joystick of the Atari 2600 console? Could we possibly cope? I bet we could. The game wouldn’t be the same but it might, shockingly, still sound like fun. Let’s find out, in what I’ll call Far Cry 2600.

Movement: With just one stick controlling facing and movement, we have to make a big change here. I’ll just come out and say it: Far Cry 2600 will control like Doom without strafing. You can turn left and right, you can go forward, and you can go backward. You can’t look or aim up or down. To compensate for this, we’ll do what Doom did: if there are enemies above or below your aim point, and none actually on your aim point, we automatically target the nearest enemy above or below.

How radical a change is that? It’s pretty substantial, to be sure. But Far Cry 2 isn’t especially about verticality. The terrain tends to be pretty flat. You certainly use the up/down functionality to make precise shots, but our Doom-style auto-aim will do that job too. As long as the target is at least partially exposed and your aim point is aligned with their position on the left-right axis, you’ll make the shot. 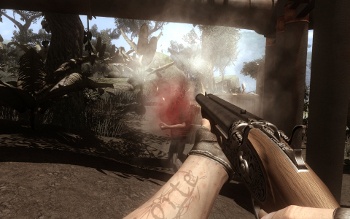 Sprint: Let’s use auto-sprint: Move forward (including turns) continuously for three seconds and you start sprinting. If you stop or move backward, you don’t sprint any more. This will reasonably handle the case where you need to quickly traverse terrain to escape or pursue. We could even require straight-line sprinting only, with any turns slowing you down; there are current-gen games that do this anyway.

Jump: We could cut it entirely, which might not be a huge loss to gameplay even though it’s a big loss for player agency. Another option is to do contextual jump. Run up to an edge, for example, and we block you from running off of it. But when pressing against the edge, tapping the button will jump. Likewise, if you are pressed up against an obstacle that you could jump up onto (such as a crate or a loading dock), then as long as you are pushing forward against the obstacle we use the button as jump instead of fire. There will be some cases where you want to shoot and jump instead, but I think we can cope.

Crouch: Cut it, mostly. We’ll design our cover to be of human height. You’re either behind cover or you’re not, and there’s nothing with space for you to crawl under. If we must have air vents for you to crawl through, we can special case those such that pushing forward against them for more than a couple seconds triggers a kneel-and-crawl-in animation that pops us inside the vent, where we can move normally even though visually we’re crouched or crawling. When we reach an exit, we again push against it for a couple seconds and then we pop out and stand up.

Everything Else: Ladies and gentlemen, let me make my case for the radial menu.

That one button we have needs to do a lot of things. Most obviously and critically, it needs to fire my weapon or throw my grenade. That it can do with a tap. But we have a lot of other needs, too, and only one button to fulfill them with. So let’s break those needs down and solve them as best we can.

For starters, let’s go modal. At any time, your character is either in combat, in combat behind cover, or out of combat.

When you’re in combat, the button fires your current weapon or throws a grenade, depending on which is selected. (More on that in a moment.) In this mode, you cannot change weapons, heal, switch throwables, or access your map/phone/notebook. All you can do is move and attack. If your gun runs empty, pressing the button again reloads. If you’re out of ammo for it, we auto-switch your weapon for you. If it jams, the button unjams you. If you run up against a jumpable object or edge, or an interactable object like a door or switch, then pressing the button while pushing forward against that special object triggers the jump or interaction. 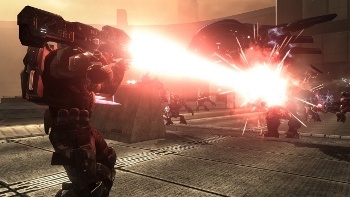 Let’s cut the iron sights, but let’s solve sniper rifle zoom. The sniper rifle is handy in that it’s not a sustained-fire weapon: If you keep holding the button down, the rifle won’t keep firing. What this means is we can define a brief threshold: Tap the button with the sniper rifle equipped, and we only fire on button release. If you hold the button, then you quickly pass the tap duration threshold and we know you’re holding the button down. That means we don’t fire and instead, we bring up the sniper zoom. You release the button once the zoom activates. Your character stands still but the joystick changes your facing/aim point. Tap the button to fire, or hold it down a second time and we switch to the next zoom magnification level. Hold it down a third time and we lower the sniper rifle without firing. It’s not great, but it’s a good incentive to snipe from a good position instead of doing it while standing in an open field.

So how do you heal or switch weapons? When you’re in combat behind cover, you can look/move but you cannot shoot. Pressing the button activates a radial menu with Heal, Switch Grenade/Molotov/Machete/Primary/Secondary/Special, and Exit. While this menu is up, you cannot turn or move. You can pick any of these options with the joystick and tap the button to confirm that option. All of this is only available when you’re behind cover.

Do you see where this is going? In Halo, you duck behind cover frequently to let your shields recharge. In Far Cry 2600, you also have to duck behind cover in order to change weapons or heal. That’s a big change from FPS standards, but it’s not an unreasonable concept in the abstract. In the real world, slinging your rifle over your shoulder and getting your shotgun out and ready isn’t necessarily something you really want to do while running for your life, after all. Adding a requirement that you get behind cover to change weapons would be a different style of play, and it means that, as in Halo, there would need to be plenty of cover around. But I think I could live with that.

What if you want to shoot when behind cover? The “in combat behind cover” mode would only kick in when you were directly facing the cover for more than a second. So when you look right at the cover object you’re behind, the UI indicates that the radial menu is now available by tapping the button. If you turn away from it, the radial menu is not available and you’re just in combat mode as usual.

Finally, when you’re out of combat you can’t shoot, period. Pressing the button always brings up the radial menu unless you’re pushing up against a jumpable or interactable object. You can still switch weapons but we also give you access to your map, phone, and notebook.

So how’d we do? What I’ve described above is sort of Doom controls with great visuals but no strafing; mostly flat terrain; contextual jumping, sprinting, crouching, and interaction; frequent full-body cover opportunities; the requirement that you be behind cover to change weapons; and the restriction that you can’t access your map and support services while in combat.

Would you play that game? I’d argue that yeah, maybe you would. It’d be a big change but I think it’s feasible. Doom is still fun to play and this would be a lot more sophisticated than Doom.

Can we make this future happen? I sure hope so. Bring on Far Cry 2600! And to my fellow game designers, stop using so many damn buttons.

John Scott Tynes swore a blood oath against too many buttons after getting his wife to play a demo of a Pixar movie tie-in game. You would think that kind of game would be very accessible. You’d be wrong.