The interesting thing about Skyrim is the sheer range of experience different players have depending on where they felt like going first and how they built their character. I have an associate who lost interest in the game because they were playing a conjurer, and the half-dozen familiars and followers they accrued made the game completely unchallenging. Which I found interesting, because I ended up quitting the game when it became too difficult. I was a one-handed / shield specialist with no followers, and I got trapped in a dungeon that I couldn’t leave until I killed the boss, who could kill me in three hits and whom I was expected to fight while a liche was summoning ice monsters in the same room. Even with every buff I had and using the last resort technique of pausing to slam a health potion between every single blow, no amount of believing in myself was getting me through that one.

Earlier on, though, I got involved in a quest in which I had to be followed around by a talking dog that I had to escort to a couple of locations on the map, but I took the opportunity to complete a couple of other quests on the way. Now, being a magical dog with a quest attached, my pedigree chum was completely immortal, and like all followers in Skyrim, it seemed to think that a footrace had been unspokenly declared whenever a hostile enemy appeared within a half-mile radius. This led to a recurring situation in which a dragon was easily defeated because it was busy breathing fire at a small mongrelly dog that wouldn’t budge a fucking inch while I stood behind it hacking at its scaly arse with a handaxe.

I actually started to resent this. I felt I had enough problems with my horse stealing my kills that I didn’t need the rest of the animal kingdom getting in on the action. And I don’t recall the prophecy stating that the Dragonborn would defeat the black dragon with the help of the mangey puppy that kept following him around. So I hastily completed the dog quest just to get rid of it. Apparently too hastily, judging by that dungeon business that made me quit.

I also accidentally became a werewolf. Not because I was bitten by one, I sort of accidentally got into the quest where you become one officially. I didn’t know, I did some jobs for the guys and they asked me to come to a little dark evil cave at night so they could give me a special present. And they’d already given me a very spiffy handaxe as a special present earlier on so they seemed like decent sorts. I suppose the option to decline came up, but after they went through all the trouble of giving me the spiel and one of them filled a big sacrificial bowl with rather alarming quantities of their blood, it felt ungrateful.

For some reason, it’s very easy to accidentally pledge yourself for life in Skyrim. I and two of my friends all had the exact same story of accidentally joining the Thieves’ Guild, too. You’d think it would want to keep a low profile, not aggressively press-gang every potential undercover police officer who shows up at the town gates, but what do I know. Anyway, becoming a werewolf did sound fun, I suppose, even if it proved to be completely useless in the end because the transformation sequence took ages, and enemies could freely whack away at my health throughout, so it wasn’t exactly good for turning the tide in a difficult battle. But the first time I transformed and turned back I found myself in the middle of the countryside wearing only my underpants, in true American Werewolf In London style. And the first thing I thought upon seeing my pale, shivering form without armour for the first time since the beginning of the game was “Oh, that’s what I look like. I forgot.” 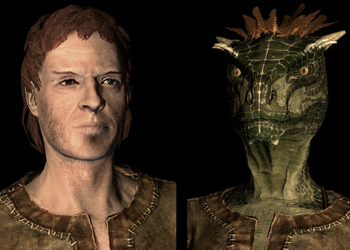 There’s something I’ve been meaning to bring up for a while, and that’s character creation systems in games like these, the kind that Oblivion more or less introduced, where you can tweak every slightest inch of muscle, skin and bone in your character’s face. I’m starting to think it’s a little bit psychotic.

It’s particularly questionable in games like Skyrim where you might spend half an hour getting every detail right before setting off on your first-person adventure, donning a full-face helmet within ten minutes of starting and never seeing your work again. It’s more appropriate in something like Dragon Age or Mass Effect where you can actually see yourself and your character regularly takes part in cutscenes and conversation, but I still feel that the exact placement of one’s cheekbones shouldn’t matter if you’re not trying to faithfully recreate Pete Postlethwaite in the role of Commander Shepard.

How it used to go down for me when handed the character face carving engine was that I’d go down the list of sliders one by one and move them all the way left and all the way right before almost always returning it right back to the middle because anything towards an extreme just looks ridiculous. These days I start by picking the hairstyle, beard and general face shape, and anything beyond those hardly seems to matter when you’re mostly staring at the back of their head or watching them converse from a mid-shot. In Saints Row games I’ve sometimes tried to get into the swing of things by giving my character high cheekbones, wide staring eyes and a mouth with a permanent half-smile because that’s the kind of face I imagine a cockney psychopath would have, but there’s always been something slightly off about the way it looks and animates in-game, like there was an accident with the botox.

I guess the point I’m trying to reach is that these systems, now seemingly a requisite in western RPGs, are starting to feel gimmicky and unnecessary. It’s fine in something like The Sims where you’re just recreating some kind of fantasy household where mummy doesn’t drink and beat the kids, but in an RPG you’re creating a look for a character whose personality and actions are determined by the story to varying degrees. It goes back to what I was saying last week, that even in a game as open as Skyrim, a certain amount of control has to be maintained to keep the game’s overall tone at an appropriate level. And it feels that anyone who doesn’t just use the character creation tool to make a relatable, average-faced heroic type is just going to take the piss and try to see how ridiculous they can make themselves look. And if they end up really getting into the game they’re going to feel pretty silly when Lord Thunderclave is entreating Fishlips McGee to aid their struggle against the dark ones.

I actually kind of preferred the Ultima thing where you chose from six or seven predetermined hero appearances of varying genetic backgrounds. Because that’s at least a directed experience. I’ve always felt facial customisation in games these days would work a lot better with a more photofit-like system, where you pick from a catalogue of pre-created off-the-peg mouths and noses, rather than mess around with seven or eight nose sliders in an attempt to create a Romanesque aquiline snout. I mean, Saints Row has you pick from six different voice packs but you don’t micro-manage the pitch and waver or pinpoint the global region the accent comes from. Not yet, anyway. Consider a patch, Volition.