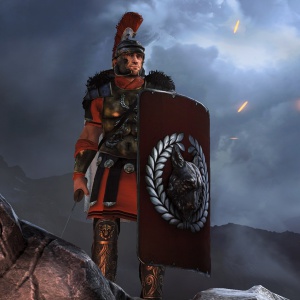 Playing through a 10v10 battle in real-time with Total War style can be super-engrossing.

The concept of the Total War series is the balance between moving around armies and agents on the abstract strategic map and the real-time tactical conflicts on realistic battlefields when strategic forces clash. The latter is where the real intriguing action in the game lies, and Creative Assembly decided to bank on that fun by expanding it and optimizing it for online multiplayer play. The 10 v 10 format lends itself to quick, decisive conflicts, and might be a perfect table-setting for publisher Sega to reap free-to-play goodness like other notable games to bear the genre moniker of MOBA – Multiplayer Online Battle Arena.

In each Total War: Arena match, you control a general pulled from history like Leonidas from Sparta or Julius Caesar from Rome. The general has special abilities you can level up and cast on cooldown throughout the match. You also have three units to control in the match, and you select the specific loadout of these units before you begin. Want to run with three weak melee but strong ranged attacking longbowman? Go for it. You can beef up on swordsmen and hoplites to break any cavalry charge, or play as the swift cavalry units and trade off durability for maneuverability on the battlefield. Each of these units can be upgraded and equipped with more expensive armor and weapons like conical bronze helmets.

The battles allow some slow build-up, with a fascinating mid-game and satisfying mopping-up. There were only a few maps on display in this early pre-alpha build, and my favorite involved three lanes: the mid flat battlefield, a low rocky ground and a high mountain pass with plenty of opportunity for ambush. Units’ facing and stance make a huge difference in Total War and Arena is no different. Your foot soldiers are generally decimated by cavalry charges on the flank or rear, while archers can only be effective at a distance. With no respawning in this MOBA, you find yourself playing extremely conservatively in Total War: Arena, but the tension is still kept very high.

Coordination is key, as with any multiplayer team game. Right now, there are no social features other than a rudimentary chat system. In the future, I’d love to see Creative Assembly allow more communication between players. There is currently a neat feature that allows you to free draw on you and your allies’ screens in order to help communicate tactics on the battlefield. Of course, the first thing I drew was a very masculine pointer – “Attack here!” Expect no different if you play online with randos like me.

There’s a bit of cosmetic specialization too. You can sport pink-tinted cloaks like your House Bolton – if you swing that way. In practice though, the color options don’t change the look on the field very much. Perhaps that’s because even though you can zoom in to a very close view to see individual men in your units trading blows in melee fights, the majority of your play will be in a very zoomed out, nearly top-down, view. That way you can get a feel for the whole battle, but maybe that’s just me.

What’s going to make or break Total War: Arena is whether players will be OK with its general slow pace. You can spend several minutes setting up your moves and positioning your units before they come into contact with the enemy, and once they are engaged, it is difficult if not impossible to disengage. It’s possible to commit your forces early, get stomped by superior numbers, and spend the rest of the match with nothing to control as your routed units run across the battlefield. Most of the maps have a win condition of holding the opponents base for a certain amount of time, but most battles were “won” long before the clock ticked to 0:00. I enjoyed the four or five matches I played but there are a lot of “ifs” involved if Arena is going to find mass appeal like its competitors League of Legends and World of Tanks currently enjoy.

I counted four important currencies to track in Total War: Arena – unit XP, general XP, silver and gold. Your unit XP depends on how well it does in battle, but you can also spend general XP on your units. Silver is the “free” currency while Gold can only be bought with real money. It remains to be seen what impact the premium currency will have on balance. Right now in the pre-alpha state, after playing a few matches, I was able to upgrade and specialize my units very pretty quickly without any real money activated. But there was a big discrepancy in power between tier 1 and tier 2 units. Hopefully, those bumps are smoothed out along in beta.

Speaking of which, the gang at Creative Assembly in London has learned the lesson that iterative testing in front of the community is the only way to go with large-scale MOBAs like they want Arena to perform against. By having a transparent development cycle in beta, Arena will be subject to criticism and commentary of a large number of players. Creative Assembly Project Lead Gabor Beressy said he is committed to responding to the players as they interact with the all of the systems in Arena.

I’ll be checking it out alongside you guys. This is Sparta!

(And as an aside for those of you who are sad that Creative Assembly is spending too much time with multiplayer and mobile games, executives there assured me there is a whole separate team of “old guard” designers still mucking about with single-player titles like Total War: Attila. More on that front soon when embargo lifts.)

(Second Aside: It looks like SEGA and Creative Assembly have opened sign-ups for a closed alpha of Total War: Arena on View Forum Comments