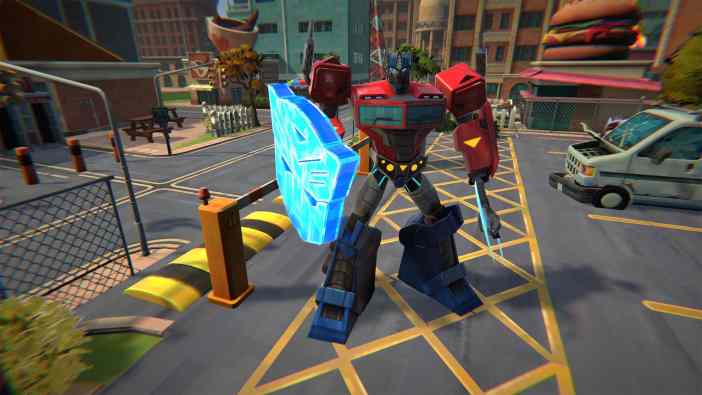 A new Transformers game is on its way to Nintendo Switch, PlayStation 4, Xbox One, and PC via Steam. Hasbro announced the latest video game adaptation of the popular cartoon series and toy line today called Transformers Battlegrounds. Developed by Coatsink, the game will allow players to assemble a squad of Autobots alongside Bumblebee and engage in battles against the evil Decepticons led by Megatron. It will release simultaneously on all platforms Oct. 23, 2020.

Gameplay details are scarce as only a brief teaser trailer has been released, but publisher Outright Games promises “tactical warfare” that can be played both solo and in multiplayer. What is known is that Transformers Battlegrounds will span a number of locations from the series, including Cybertron and Central City.

Mark Blecher, Hasbro’s SVP of Corporate Strategy and Business Affairs, says that Transformers Battlegrounds will offer a “new and authentic take on what a Transformers video game can be,” and that it will look to bring the clash between Autobots and Decepticons to life for a new generation of players.

This marks the first Transformers game for home consoles since Activision and PlatinumGames‘ Transformers: Devastation in 2015. The third-person action game received a positive response from fans and critics, although it wasn’t as beloved as the Japanese developer’s other action titles. Prior to that, High Moon Studios developed a pair of well-regarded third-person shooters (War for Cybertron and Fall of Cybertron) that were followed up by the heavily derided Rise of the Dark Spark.

The official website promises more information soon on Transformers Battlegrounds and confirms a physical release is on the way.