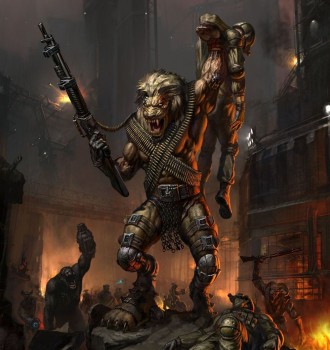 Scientists in the U.K. are warning of a looming “Planet of the Apes scenario” that could result from ongoing experimentation and “humanization” of animals.

The last thing any of us wants is a bunch of damn dirty apes poking and pawing at us and making us their slaves, which is why we might want to pay attention to a new report put together by U.K. researchers calling for new regulations on the “humanization” of animals for research purposes, including at outright ban on “Category Three” experiments. Scientists in the U.K. are not allowed to experiment on great apes like chimpanzees but such research is permitted in other countries, including the U.S., and as the inimitable Telegraph points out, that’s exactly the kind of crap that led to the Rise of the Planet of the Apes.

“The fear is that if you start putting very large numbers of human brain cells into the brains of primates, suddenly you might transform the primate into something that has some of the capacities that we regard as distinctively human [such as] speech, or other ways of being able to manipulate or relate to us,” said Professor Thomas Baldwin, part of the Academy of Medical Sciences working group that wrote the report. “These [are] possibilities that are at the moment largely explored in fiction [that] we need to start thinking about now.”

Baldwin said that if modified monkeys, which can be legally used for research purposes in the U.K., begin to display abilities similar to those of chimpanzees, we’d all better arm up and head for the hills – or, at the very least, slow things down a bit. “If it’s heading in that direction, red lights start flashing,” he added. “You really do not want to go down that road.”

Aside from ethical concerns and the potential for maniacs to blow it up [God damn you all to hell], the report also noted the “Frankensten fear” that such experimentation could create “monsters.”