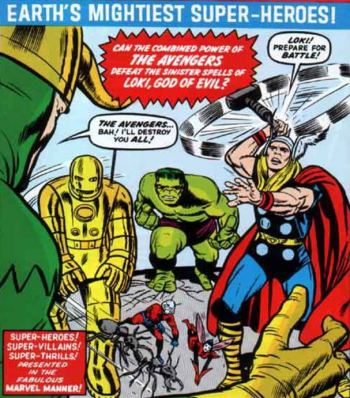 Rare comics found in garbage and used as art could have been worth as much as £20,000.

Artist Andrew Vickers has managed to make the most expensive papier-mâché known to man, by accident. The sculptor found a ton of comics thrown away in a skip, thought that they’d make a great addition to his next piece Paperboy, and put his heart, soul, and – unbeknownst to him – about £20,000 (approximately $30,000) worth of rare comics into the piece. Among the fallen was a copy of Avengers #1, which has been known to go for as much as $250,000 in mint condition at auction; even in not-so-great shape, it still sells for tens of thousands. Of course, not-so-great kind of assumes you haven’t coated it in glue and mulched it into a sculpture.

The loss was discovered by Steve Eyre, who owns a comic book shop. He spotted the Avengers #1 cover on Paperboy‘s inside leg. He owns a copy of that comic, worth over £10,000, and once he saw it in Paperboy he started looking for other tell-tale signs. He found the remains of six rare comics. “It would have been cheaper for Andrew to make this out of Italian marble,” said Eyre, “because the raw materials that have gone in to it I could have sold for a lot more than he is going to sell this statue for.”

Vickers, who doesn’t care about money, is amused by the whole thing. He had no idea the stuff he found thrown out in the street was actually worth real money. “I really love the idea of me creating something out of such expensive things that’s worth less,” he said. “I think it’s brilliant.”