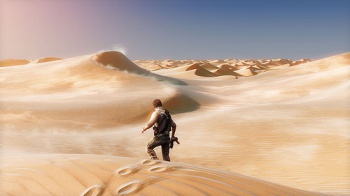 Marianne and Cormac Wibberley, writers of National Treasure, are the new Uncharted scribes.

In another blow to the Uncharted movie’s fortunes, its director Neil Burger has left the Drake’s Fortune project. Marianne and Cormac Wibberley, the brains behind the first two National Treasure movies and Charlie’s Angel’s: Full Throttle, have been added as the film’s writing team. As yet there is no director to replace Burger, and according to Variety the project will wait until the Wibberleys have finished the script before looking for someone to direct it.

Presumably this news means Burger’s promises that his team were going back to the videogame for inspiration are null and void. Back in 2011, Richard Lemarchand, then working for developer Naughty Dog, had said that “we’ve been impressed at Naughty Dog with the level of interest they’ve shown in talking to us and to Amy [Hennig, creative director] in particular in order to get it right. The attachment of Neil Burger to the project is a very good sign in that regard.” Naughty Dog has not commented on recent developments.

Interestingly, according to the Internet Movie Database the Wibberleys have only ever acted as screenwriters, not story writers, on their movie projects. The one exception to this was National Treasure: Book of Secrets, which got a 32% on the Rotten Tomatometer – “it’s frustrating when lazy and illogical plot devices are used like cattle prods” said the reviewer for the Toronto Star – but was enjoyed by audiences.