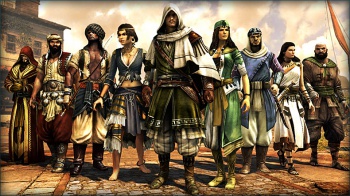 The studio bringing Uncharted to the big screen is picking up another videogame franchise, one that focuses less on snark, more on hidden blades.

According to a recent report by Variety, Ubisoft is in the midst of finalizing a deal that would allow Sony Pictures to adapt the massively popular Assassin’s Creed franchise for the big screen. Full details of the agreement have yet to be announced, but for now it seems like Sony will be co-funding and distributing the upcoming film, while Ubisoft will be maintaining creative control of the project.

The Assassin’s Creed movie’s green-light has only just begun to shift from flicker to healthy glow, but Ubisoft had already been thinking about this and other game to screen adaptations for months. You may remember that back in March, Ubisoft started poking around the minds of Internet users (always a dangerous maneuver) with online surveys, asking what elements players would like to see included in a hypothetical Assassin’s Creed screen adaptation. Whatever opinions it gleaned from the unwashed virtual masses are still a secret, but at least, on some level, it looks like the company is doing its best to deliver what its fan-base actually wants, instead of just making it up as it goes along.

Sony Pictures has reportedly beaten out Universal and “other major Hollywood studios” for the rights, and Ubisoft may have gotten lucky that the company willing to fork over the most cash is the same one that’s already gaining experience with other high-profile videogame titles. Sony is currently handling the inFAMOUS and Uncharted films, and while we’ve yet to see the final results of those endeavors, Sony has already shown us that it’s willing to make large changes in support of the fans and original source material. It’s also been recently involved with the Spider-man films and the Daniel Craig Bond movies, so it’s got at least a little nerd-cred there, too.

Obviously, with the film at such an early stage of development (so early, in fact, that you can’t even call it development), there have been no announcements, rumors, or lively forum wars about the movie’s cast, story, or expected release date. Still, that’s no reason not to get an early start. I’m throwing in my vote for Nathan Fillion as Ezio. He’s completely wrong for the part, but I’m always rooting for that guy to actually land something worthwhile.