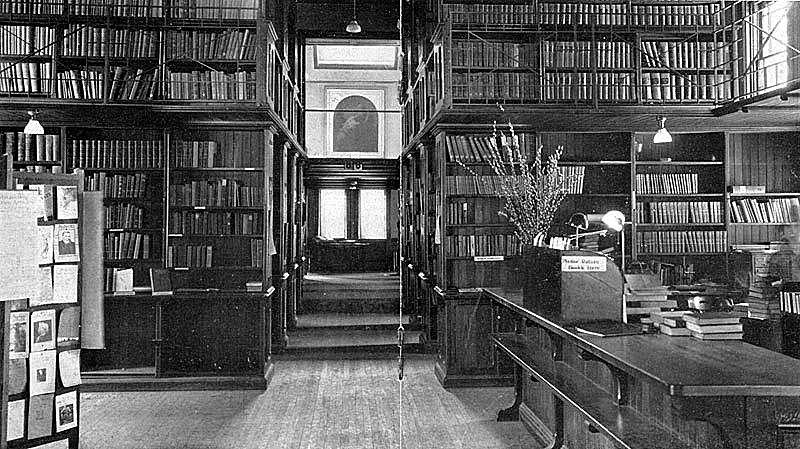 Editor’s Note: Randy Smith is co-owner and creative director of Tiger Style, which recently released Spider: Rite of the Shrouded Moon. In researching secret societies for the game, Smith uncovered the Knights of the Buried Chamber, a group hidden in mystery and conspiracy. Here is a look into his findings.

When the Brooks Library was demolished by wrecking balls in 1971, not even a century after its erection, patrons wept and wrote poetic epitaphs. Stately, structurally sound, and designed by a celebrated architect, the building had been an emblem of pride for the bustling colonial town of Brattleboro. In modern currency its value would have been in the millions.

Why, then, was the library destroyed?

To make room for a larger parking lot for the Post Office, so the official version goes. A mysterious secret society called The Knights of the Buried Chambers insinuated a different tale, one of a conspiracy against them. The library, they said, had been theirs. The philanthropist who donated the library to the town was their leader. His death, they claimed, was no accident.

They left behind a tattered story I’ve been reconstructing. I have searched for stone ruins in the wooded mountains, scanned the faces of graves for clues, and decrypted centuries old manuscripts. I am now so conversant in their secret handshakes and mystical rituals I could probably pass as an initiate. But I am stuck on the Brooks Library and its suspicious disappearance. 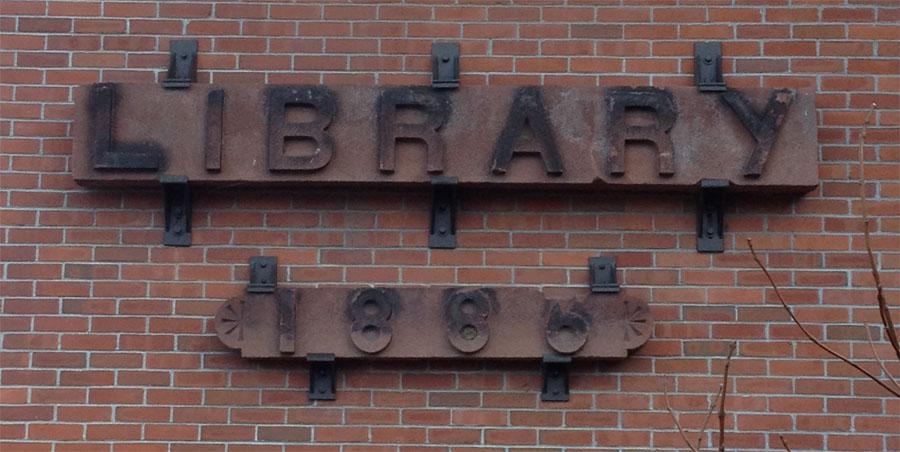 These words, inscribed in broken terra cotta panels, are all that’s left. I’m standing on Main Street in Brattleboro, an inconvenient four-hour drive from where I grew up in the opposite corner of Vermont. The panels which once adorned the Brooks Library are mounted today at eye level on the replacement library, architected from unfeeling brick and concrete slabs in the brutalist 70’s style.

Reviewing my terse and enigmatic instructions, I turn right in search of “a row of Triangles,” a shape venerated for its symbolic significance by The Knights of the Buried Chambers, and find them in the form of gables atop another old building, a town landmark that presently serves as the municipal center and police station, although experience has taught me I should research its earlier functions. At this point my instructions terminate in a string of seemingly random numbers.

I approach the building uncertainly.  Dry leaves scurry across the immense lawn in the cold fall breeze.  Marble trim adorns a fieldstone foundation. Something there catches my eye. The entire building is circumscribed in a specific pattern. I glance down at the list in my hand and begin to compare.

At this point I have little doubt that The Knights of the Buried Chambers are the right secret society to serve as the model for the one that appears in Spider: Rite of the Shrouded Moon.  There isn’t much written about them, but that’s perfect, since otherwise I wouldn’t know what aspects of their history Spider‘s players could become exposed to, which would make it impossible to construct puzzles to which everyone will find the same answers.  What little they left behind is suspect and hard to verify, which is exactly in alignment with my goals to create ambiguity about what is real and what is not, an art form mastered long ago by secret societies throughout history but forgotten in our post-Wikipedia world in which we erroneously believe that every fact is at our fingertips and every debate can be silenced by our smartphones.

And lastly, they or someone pretending to be them for unclear reasons have created these instructions, propelling me on this adventure, an experience I hope to share with the most devoted players of Shrouded Moon.

What does a forgotten secret society in a small corner of the world have to do with a video game about being a spider, an eight-legged protagonist who explicitly cares nothing for the human drama unfolding in the abandoned mansion it leaves covered in cobwebs?

It’s a more natural fit than it might seem. Spider has always been about layers. On the surface you are a spider who spins webs, traps insects, and does nothing a normal spider would not do. One layer deeper you are a human player looking over the spider’s shoulder, drawn into a story told without words. Your spider builds its webs off the elements of this tale: a locket tossed down a well, a hidden compartment containing hastily-stashed secrets, portraits of families, trails of footprints, all adding up to a fuzzy picture of what happened here. Yet another layer deeper, you come to the realization that the former occupants left behind a puzzle, one that can be solved if you figure out how.

Or you ignore all of this and just catch bugs like a normal spider. That’s allowed too.

When it came time for a sequel to Spider, I wanted to delve even deeper. What if the puzzle in the story was created by a secret society? And what if that secret society wasn’t one I made up but a real one? By researching their ins and outs, I could bury secrets in the game that players could only unearth by doing research of their own, crossing the line from game to reality. We’d already worked hard to blur that line, most notably with the real world location feature which matches the time of day, weather, and even moon phase in the game with what you see outside your window.

And so Shrouded Moon features enigmatic encrypted writing, easily readable if you’re a Holy Keeper of the Buried Chambers. Untrained eyes might bypass subtle cues that advertise themselves like a neon sign to any Ascended Scholar. There’s an entire string of mysteries I appropriated from real life and not even fully solved myself. I don’t know of another game that has done something quite like this, which I call “history hacking.” It’s drawn in puzzle enthusiasts and history buffs alike. And because it’s not contrived with a tidy ending, it is a mystery that could go forever unsolved. A lot like the mystery of the Brooks Library which I’ve become obsessed with, which isn’t even blocking me from continuing with the instructions.

Unlike the Freemasons, the Knights of the Buried Chambers didn’t publish membership lists, so there is no proof that George Jones Brooks served high office in the Order as they claimed. However, it’s a matter of public record that he collapsed dead on the street just days before he was to deliver the inauguration address for the Brooks Library. He had been on his way to visit it, in fact, his pride and joy and gift to the town he so loved.

Reports suggest the Knights hid their documents in the library, and that if you knew where to look you could study them to join The Path To The Light, the Order’s indoctrination process. You can find them yourself today with a simple search. Could this have been why the library was demolished? There had recently been a schism, following which the Brooks wing of the Order emerged as a splinter group, coining itself the Reformed Temple. Did the other Temples seek revenge?

I have leafed through historical records, read newspapers from the 1800’s, held personal letters penned by George J. himself. There was controversy before the library’s demolition. Brooks’s will states clearly that his generous gift to the town was given under the condition that it should forever be used as a public library under the control of his board of directors, but that’s not what was going down. George had been dead for over 80 years, but his heirs were taking a stand.

“The town has been forced to build the new library. There is nothing personal about the new building.”

“The town does not give the library to the people of Brattleboro in the sense that Brooks gave the original library.”

“I’ve been running around getting acquainted with what’s been going on since 1887 but have a lot to do before I will be satisfied.”

Amongst historical documents, a series of missives handwritten in a broken scrawl caught my eye. Whoever this mysterious writer was, maybe they had answers for me. If they were protesting the library’s impending destruction in 1966, maybe they were still around today. The letterhead read “19 Terrace Street.” Walking down Terrace, I realized it must have been renumbered at one point. All the numbers are even, the odd side just a steep slope. So much for knocking on the door.

I found an old newspaper article mentioning 19 Terrace that set me on the path to constructing the genealogy of its occupants from graves and obituaries. The trail led back to George J. Brooks via his sister, Lucy, whose descendants called 19 Terrace home. This confirmed my suspicion that the writer was a Brooks heir, but the signature was a problem. It didn’t match any known member of the family tree. Who, then, could it be?

I never tracked down my mysterious writer, never attained clarity on the fate of George Brooks and his doomed library. Each time I review this story, I get sucked back into the investigation and wind up fitting one more puzzle piece into place. Like the story of Shrouded Moon, it seems to be one that defies absolute certainty and relies on imagination and interpretation. Some mysteries float outside our reach and are not meant to be secured to the cold, stable earth.

However I did continue much further with those cryptic instructions, and I did weave fact and history into the fiction of our game, Spider: Rite of the Shrouded Moon. If you’re intrigued by what you’ve read, if unsolved mysteries, historical research, and challenging puzzles inspire you, maybe you are a good candidate to set foot in search of the Knights of the Buried Chambers. Myself and George Jones Brooks will be watching for you.