In the dark of The Web
Where the Grumpy Grumps go
And the air smells foul of old Cheetos
Is the place to turn if ye wish to know
Of the Poorly-Adapted Lorax.

In the time long ago, some people say
If you ask the right folks you can still hear, today
That The Lorax was good
Before Ol’ Hollywood
Came and “Re-Imagined” The Lorax away.

What was The Lorax?
Why was it so good?
And how was it spoiled by Ol’ Hollywood?
Could its fate have been different? Did it have to be so?
Mister MovieBob still lives there.
Ask him. He knows.

The Lorax is, famously, the “sad” Dr. Seuss book, second only in tales of traumatized childhoods to The Butter Battle Book (the “scary” Seuss book). They are sad and scary primarily because they both ultimately concern The End of The World. When Theodor Seuss Geisel had a point to make, he did not screw around.

Butter Battle is a Cold War allegory, and cuts out on an ambiguous note, with two pointlessly squabbling nations poised to incinerate one another in mutually assured destruction. Lorax, on the other hand, is a slow-burn chronicle of armageddon, opening in the wake of an Arboreal Apocalypse before tracking back to explain how things got as bad as they did. It’s by far Seuss’ gloomiest story, reflecting the end times tenor of the environmental movement during its 1971 original publication and the urgency of its author’s intentions. Its conclusion is ostensibly more hopeful than Battle, but also bluntly insistent, a direct call to activism, and comes only after the reader has effectively watched the world slowly die.

The story opens with an unnamed young boy in a grim, pollution blighted world who seeks out a hermit called “The Once-ler” on The Street of The Lifted Lorax, seeking to know, well, “What was The Lorax? And why was it there? And why was it lifted and taken somewhere?”

The Once-ler then relates the main story, revealing that it was he who killed the world. As a young man, he’d come to an edenic paradise and begun felling rare Truffula Trees to make a very useful (he insists) omni-product called a Thneed. He was repeatedly warned against the effect of his ever-growing industry on the ecosystem by The Lorax, a mustachioed nature spirit who “speaks for the trees,” but chose to ignore him until it was too late. By the time the last tree has been felled (bringing an end to the forest and Once-ler’s Thneed empire), The Lorax has already been forced to send the region’s poisoned/malnourished animals away to seek greener pastures. As a final act, he solemnly lifts himself away into the ether, leaving behind a stone marker cryptically inscribed with the word “UNLESS.” Back in the present, Once-ler gifts the boy with a treasure, the last Truffula Tree seed on Earth, effectively telling him (and the reader) that the repair of the future is now in his hands.

Unlike many other Seuss works, it’s not hard to imagine how you’d adapt that into a movie (and, indeed, it was already turned into a well regarded animated TV special). The basic structure is right there; Once-ler has more than enough ambiguity to be a proper feature film character (he’s not “evil” so much as stubborn and shortsighted, and his self-imposed exile is a immediately compelling penance) and the premise is as timely as ever. All one might need do to flesh it out would be to beef up some individual characters among the various forest creatures, give them arcs of their own so that the end of their world is all the more relatable, perhaps even balance out the message by having some otherwise decent people working at Once-ler’s Thneed factory, to at least partially explain why so many chose to look the other way while the operation poisoned the land. That, one imagines, could be a good movie. Perhaps even the first truly great (recent) feature film of a Dr. Seuss book. 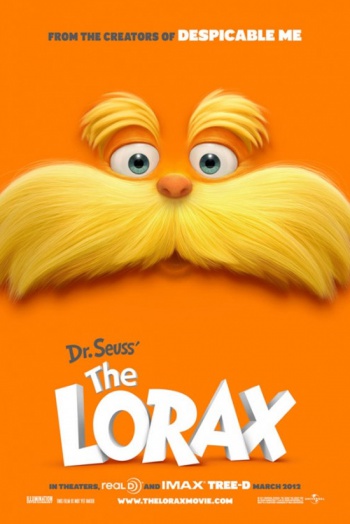 It would also be almost unbearably dark. There’s just no getting around it. The Lorax as written is a relentless downer, purposefully designed to draw tears and anger at bedtime story length. A tonally faithful film adaptation would likely win raves from critics and older filmgoers, but it might actually be too oppressively bleak for the little ones. 90 minutes of watching the Barbaloots, Hummingfish and Swomee-Swans effectively being slowly poisoned into extinction? Might as well just call it The Road for kids. In other words, it’s understandable (if not necessarily laudible) that Universal Pictures would want to find a way to film the story that wouldn’t lead to each screening concluding with lines of sniffling, tear-streaked toddlers staggering out of theaters alongside parents already looking weary from the “Old Yeller Conversation” they’re going to be having on the ride home.

So, instead, they turned it into a movie about a dweeby teenager trying to get laid.

On the surface, the re-imagined story setup makes a certain amount of sense, keep the Once-ler/Lorax part (mostly) in its proper, short(ish) form and instead embellish the character of the boy who came looking for the answer. The way they’ve gone about it, on the other hand …

In the new story, the boy is Ted (Zac Efron), whose sole apparent goal in life is to make time with his pretty neighbor Audrey (Talyor Swift), a classical Manic Pixie Dream Girl with a yearning to see a real tree, who enthusiastically professes intent to confer her affections on any man who can deliver one. Easier said than done, as the teens are residents of Thneedville, a sterile, corporate managed plastic city that exists as an artificial Main Street USA paradise walled off from the dead, deforested world outside. So Ted is off to see The Once-ler. Several times, actually, so that the plot can cut between the story of The Lorax and the goings on in Thneedville, where Ted’s efforts are undercut by evil businessman Aloysius O’Hare, who effectively “rules” Thneedville by selling the Bottled Fresh Air (ha ha) and dreads competition should trees return.

At first, it almost seems like this is going to work. Thneedville’s Disney-style plasticene cheerfulness (instead of the drab horror one expects from the post-apocalypse) makes for a great nasty reveal of just how dead the world is outside its walls (and under its surface). The opening song number introducing the town is a brutal parody of consumer culture, as Thneedville’s citizens joyfully revel in their own ignorance both of what their lifestyle is covering up and what it has done to the world around them. If this is the film’s way around the sad parts, adding humor, but with an Idiocracy-style satirical edge, it’d be a bold move. Then O’Hare shows up and you realize the film intends to chicken out on the condemnation. Thneedville isn’t bad, it’s just been led astray by The Bad Guy and will happily turn over a new leaf once Ted and Audrey show them the way. You also realize that Thneedville really only exists so that the film can stage the endless, elaborate comedy chase sequences mandatory for 3D animated movies.

So too it goes with The Once-ler, who shows his face in this version and is voiced by Ed Helms. This time around he initially opts to compromise and be friendly with The Lorax and the animals, agreeing to stop cutting trees after the first one and instead harvest the necessary foliage instead. He doesn’t, of course, which makes him an even darker character. Not merely callous, but an outright betrayer.

Except he’s not, because his culpability has had the edges sanded off just like the folks in Thneedville. See, he’s actually a pretty decent guy, his big flaw is wanting to please/impress his awful, obnoxious family members. He employs said family as his startup workforce, and it’s their laziness that leads to demands that trees start getting cut once again. They’re even a constant presence during what’s intended to be Once-ler’s villain song, ever reinforcing the notion that there’s nothing inherently bad about him and his business just as there’s nothing inherently bad about Thneedville, just bad apples pushing people in the wrong direction, easily fixed.

That’s cowardly. Part of the reason that the original story mostly comes down to just Once-ler and The Lorax is so they can stand in for bigger groups; we are all The Once-ler. This is also why the book concludes on a call to action and an open ending (which the movie certainly doesn’t) to make the reader understand that a happy ending is not guaranteed with this stuff.

You cannot teach an audience a lesson if you’re not willing to allow for the possibility of them feeling bad about giving the wrong answer.